When gold was discovered on the American River near Sacramento, California, in January of 1848, news spread quickly and northeastern clipper ship companies scrambled to transport large numbers of prospectors to the west coast as fast as possible. Scholars estimate that within ten years, well over 500,000 men made the trip, with most braving the long voyage in clipper ships sailing around the tip of South America. In order to compete for passengers, ship companies began promoting the size, weight and speed of their ships by displaying 4 x 6 inch, vividly illustrated cards in office windows throughout port districts of cities such as Boston and New York.

Although printing technology underwent several advancements in these decades, the cards were mostly produced in full color on glossy coated stock. To colorfully illustrate the images, printers relied on popular ink methods of the day such as linseed oils, coal tar dyes and various European-based pigments. Such techniques were made popular in contemporary newspapers, broadsides and books, allowing printers the flexibility to produce creative and visually appealing artistic images on their cards. A typical card prominently featured the ship company name, the destination, the name of the ship and the location from where the ship would depart. Bruce Roberts, one of the only writers to research the history and significance of the cards, notes that they “represent some of the finest early American color advertising artwork” of the nineteenth century (35). 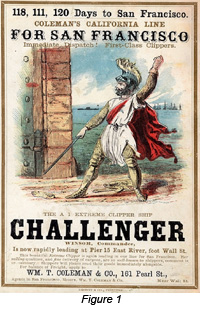 As competition for passengers expanded, printers placed more emphasis on the color and style of illustrations, while limiting the amount of written information on the card’s face. This change resulted in the creation of complex representations of American manhood in order to appeal to men anxious to travel to the frontier lands of California. While clipper ship companies were no doubt hoping to draw passengers by portraying their ships as fast, strong, stable and dominant in the face of rough seas, the cards illustrate the kind of power and aggression that northeastern men hoped to acquire by making the trip to California, or hoped to demonstrate once they arrived. Such an argument helps explain the proliferation of cards depicting heroic warriors from a variety of times, spaces and places. Scholars examining Readex’s stockpile of images will find Trojan Warriors, English Kings, and French Zouave soldiers engaged in deadly combat. For example, the “Challenger” (Figure 1), shows an armored knight who has just landed ashore. He is perhaps ready to seize some new territory as his navy arsenal of clipper ships rests in the harbor. 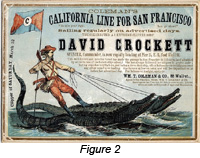 These vivid images of power, aggression and military might would certainly have resonated with the legions of ex-soldiers looking for work after the recently concluded war with Mexico, as many flocked to California to work as laborers in the mines. In fact, the discovery of gold in California drew soldiers, miners and workers from all over the world (Mexico, Hawaii, Chile, Peru, China, Ireland, Germany, France, Eastern U.S., Australia), making this newly acquired land in the West a battlefield where race and nationalism shaped class conflicts and constructions of masculinity. The Treaty of Guadalupe, which granted the U.S. Mexican lands including California, did not inaugurate peace in this region. Rather, if the war led to a remapping of national borders, then it also required citizens of the state who would be willing to establish American authority in order to “civilize” the region. Historian Amy Greenberg argues, “Territorial expansionism provided a fictional space where men could join in a common celebration of American might and where American men, struggling through a period of economic and social transformations, could find redemption” (44). Such context provides a clearer explanation for the abundance of military images in these cards. Some northeastern white men undertaking long journeys to a newly domesticated but largely foreign state likely imagined themselves as heroic warriors, and the cards certainly appealed to this vision. 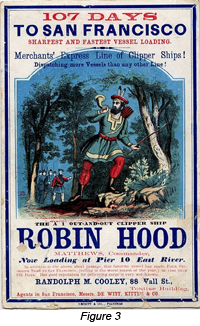 Many of the Clipper Ship Sailing Cards also promote a trip to San Francisco for certain groups of white, working and middle-class men who can perform or achieve forms of manhood associated with economic prosperity and racialized dominance over others. Shifting economic conditions attributed to the rise of industrial capitalism destabilized concepts of manhood associated with financial security and pride in working class, artisan labor. Greenberg notes, “The appeal of the frontier, where strength, will, and bravery counted for more than a good appearance, was understandably great among those who found fewer and fewer public acknowledgments of their masculine prowess in the industrializing United States” (13). David Crockett, the “King of the Wild Frontier” (Figure 2), is depicted in a creative illustration that finds his woodsman persona conquering the new frontier of the wild ocean. Additionally, a colorful illustration of the mythic Robin Hood (Figure 3) conjures the image of the confident woodsman who fights a righteous cause on behalf of the economically disenfranchised. The men in these images fearlessly travel through dense woodlands, or harsh seas, confident in their strength, talent for survival and ability to stay alive in dangerous conditions. This form of martial manhood dramatizes a white male flight from civilized unmanliness to reclaim power over a more primitive, patriarchal landscape. Novelist James Fenimore Cooper’s works, immensely popular in this era, conjure the popular literary trope of the vanishing Noble Savage on the frontier, and the Clipper Ship cards likewise capture this haunting image. As Shelley Streeby argues, “The literature of Manifest Destiny, in the 1850s as in earlier decades, obscured the ugly side of expansionism, and especially the displacement of native peoples through violence, by focusing on the unifying aspects of the endeavor” (44). Card images such as “Seminole” (Figure 4) emphasize aggressive, masculine primitivism in the (white) Native body. The Seminole warrior standing gracefully in front of a tropical waterfall sentimentalizes the southeastern tribe displaced by President Andrew Jackson’s brutal military campaigns in the early part of the century.

Another card features a rather Anglo-Saxon looking “King Philip” (Figure 5) foregrounded against an artistic rendering of a Wampanoag village. The leader of one of the bloodiest wars in the continent’s history, King Philip, or Metamora, led a sustained military campaign against colonial English settlers in the late seventeenth century. His resistance had evolved into legend by the mid-nineteenth century, and a popular play, “Metamora; or Last of the Wampanoags,” played to packed houses through the northeast. As Philip Deloria has argued, to antebellum Americans, Indians dually represented the contradictions of natural freedom and uncivilized savagery. The concept of the “Noble Savage” responded to an urge by some Americans, especially men, to idealize and desire Indians while despising and dispossessing them of their lands at the same time. The tension of this contradiction can be found by comparing the idyllic Native representations in “Seminole” or “King Phillip” with celebrations of continental expansion in “The Enterprise” (Figure 6). 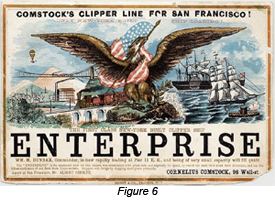 Although the former might promote the adoption of an imagined Native lifestyle in order to escape the feminization of urban life, the latter would likely reject traditional Native lifestyles as uncivilized and untenable. The “Enterprise” celebrates continental expansion as a national narrative of technological progress. In this card, the bridges, railroads and clipper ships represent the signs of modernity, yet the “King Philip” and the “Seminole” remind us that these “enterprises” were built on Native lands taken through violent military campaigns. The Seminoles and Wampanoags were just two of hundreds who were displaced from their lands in the name of progress. The “Gov. Morton” (Figure 7) succinctly encapsulates this narrative by imagining California as a modern reenactment of the Puritan landing at Plymouth Rock. In this re-imagining, the Mayflower is now a California clipper ship. 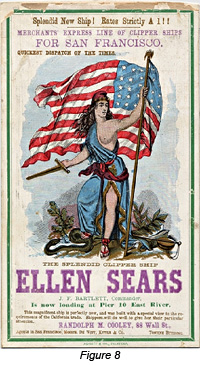 Resembling the popular literature of the era, including story papers and later dime novels, the Clipper Ship Cards signify allegorical depictions of gendered relations and U.S. imperialism. Women are often depicted as representatives of the body politic, as in cards such as the highly sexualized “Ellen Sears” (Figure 8) or the patriotic “Young America” (Figure 9). These women stand aggressively outside the domestic sphere as the prime movers of democracy and empire. Such images recall Amy Kaplan’s argument that “Domestic discourse both redresses and reenacts the contradictions of empire through its own double movement to expand female influence beyond the home and the nation while simultaneously contracting woman’s sphere to police domestic boundaries against the threat of foreignness both within and without” (187). Images of women policing the nation’s boundaries imply a sanctioning of empire-building, while dissociating such acts from the male body. Print culture, particularly ephemera, has much to teach scholars of 19th century gender, race, nation and empire. Researchers interested in these topics will find that Readex’s collection includes hundreds of Clipper Ship Sailing Cards displaying a dynamic variety of images and messages. This catalogued collection represents an ideal source of ephemera just waiting to be explored. These cards tell a story of maritime transport, the conquering of the oceans, and the expansion of the West, as well as the importance of racial, class and gender divisions in national citizenship discourses. Within the scramble to settle California, the cards themselves participate in a commercial and imperial expansionism that implicates them in transcontinental empire-building of the 1850s. Their illustrations were vital to the ship companies who built their riches on the dreams of men who took to the sea dreaming of land, women, authority, and multiple visions of imperial manhood.

Kaplan, Amy. The Anarchy Of Empire In The Making Of U.S. Culture. Cambridge: Harvard UP, 2002. Print.

Jeffrey Gagnon is a Doctoral candidate in Early American Literature at the University of California, San Diego. His work investigates the intersection of race, class, ethnicity and gender in literature that attempts to resist European colonialism. Specifically, his dissertation investigates the ways that marginalized men and women use strategic alliances and meaningful interpersonal relationships in order to survive and even thrive in the face of oppression and exploitation. Generally, his research interests include popular texts, dime novels, maritime literature, transnational figures and subaltern texts.