“America’s Rembrandt”: The Life of Thomas Eakins as Seen in America’s Historical Newspapers

Thomas Eakins (1844-1916) is recognized as one of the greatest American artists of the 19th century. While receiving little official recognition in his lifetime, he created profound realist works whose influence persists to this day.

Eakins also played a leading and controversial role in American art education, pioneering the study of the anatomy and the human nude. He was among the first to use photography to study the human figure in motion, and his innovations as director of the Pennsylvania Academy of Fine Arts made it the leading art school in the United States.

Because he was out of step with the artistic sensibilities of his era, Eakins “sold only about 25 to 30 paintings in his lifetime,” as noted below in a review of a 1986 “American Masters” documentary, published in The Oregonian:

Things got so bad near the end of Eakins’ life that many people, after commissioning him to do portraits, rejected the final results, sometimes refusing to accept the paintings even when Eakins offered them free. Eakins painted what he saw, without cosmetic correction, so some of his subjects turned out to be less handsome or pretty than they had hoped and expected. Philadelphia was America’s cultural center when Thomas Eakins was born on July 25, 1844. By the time he was twelve years old, Eakins was demonstrating advanced drawing ability and an unusually fine understanding of perspective. His father, a prosperous calligraphy teacher, encouraged and influenced his son’s artistic pursuits.  After excelling at Central High, the city’s leading public school for applied arts and sciences, Eakins went on to study drawing and anatomy at Philadelphia’s Pennsylvania Academy of Fine Arts, America’s first art museum and art school. His study of anatomy and dissection at Jefferson Medical College piqued his interest in surgery, which he later depicted in major paintings.

By 1866, the 22-year-old Eakins was in Paris studying with Jean-Leon Gerome at the Ecole des Beaux-Arts. Eakins’ attendance at the atelier of Leon Bonnat, a realist painter concerned with anatomical accuracy, deepened his passion for the human figure and the methods of the French and Spanish masters. Eventually, his own work would hang in New York’s Metropolitan Museum of Art, home of many 19th-century European masterpieces, as seen in this 1917 article from the Philadelphia Inquirer, published a year after his death:

Eakins belongs to the type of painter whose worth is appreciated only after time has elapsed. The simplicity of his life and the sincerity of his attitude towards his art as well as his big indifference to notoriety completely deceived the casual official in art circles. 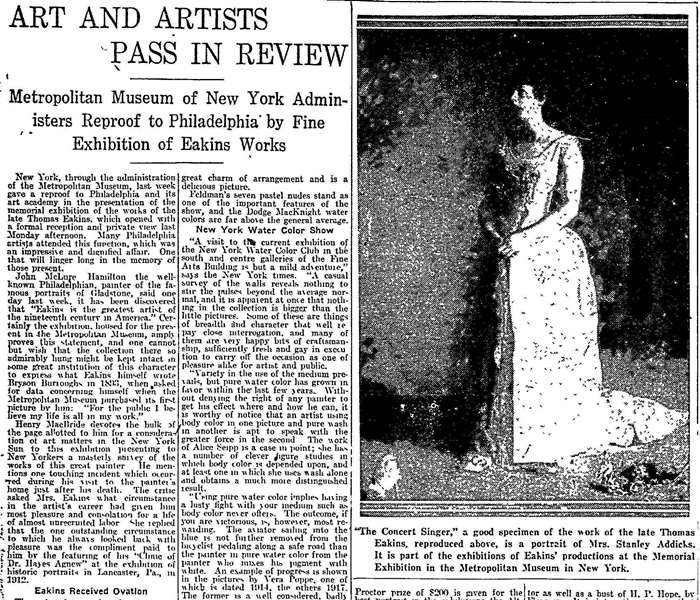 Back in the United States, Thomas Eakins’ technical mastery was readily apparent. He began teaching at the Pennsylvania Academy in 1876 and was appointed director by 1882. He revolutionized art education during his tenure, putting in place practices in use today. Students began instruction in painting in the early stages of their classwork, so a better understanding of color in the real world could be achieved. He welcomed students of both fine and applied arts and encouraged the use of photography in studying anatomy and motion. Learning to paint the human figure directly from observing nude models was emphasized.

Depicting a naked subject was fraught with moral peril. This excerpt from a review of an art exhibit in 1892, published in the Philadelphia Inquirer, Eakins' hometown paper, expresses a contemporary view of the nude as subject:

There is no excuse for this. It is bad ethics for an artist to introduce his model to the public….When a Venus or what-not is painted we are not to think of her as a nude model, but as an artistic creation. 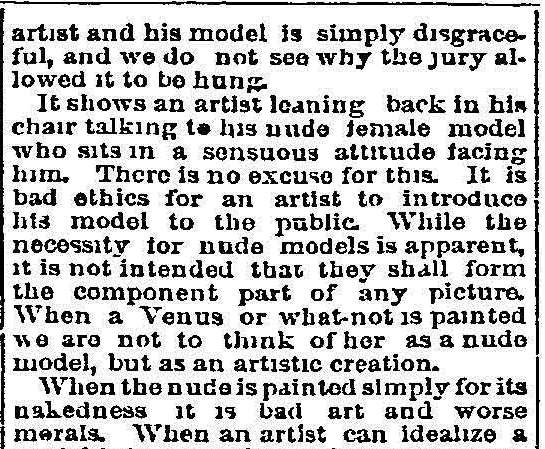 Press coverage of art exhibits in the 1870s and 80s, when Eakins was beginning his career, tended to be long lists of participants. Sometimes a phrase giving the title of a painting and its subject would be included. In this review of an 1878 watercolor show at the National Academy of Design, published in the New York Herald, Eakins is mentioned near the end of the second paragraph. His exhibited painting, “Study of Negroes,” was later renamed “The Dancing Lesson (Negro Boy Dancing)” and acquired in 1925 by the Metropolitan Museum of Art. 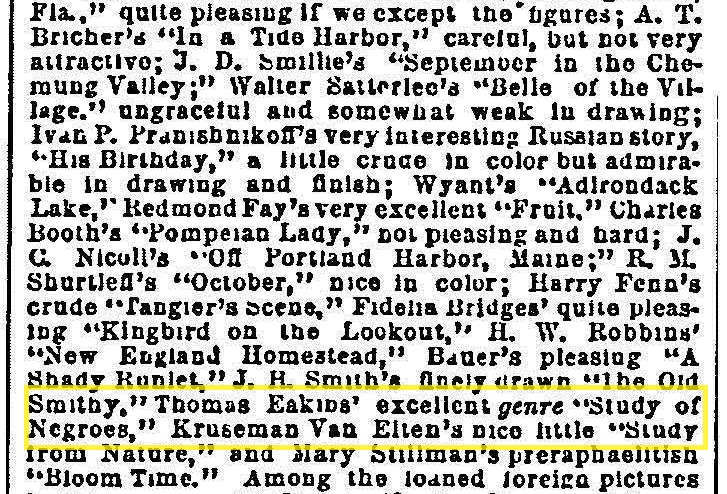 In 1870, Eakins began producing a series of sketches and paintings of rowers on the nearby Schuykill River.  This note about “The Pair Oared Shell,” which was displayed at the National Academy of Design, appeared in an 1879 issue of the New York Herald:

It is intensely real and unfortunately decidedly photographic.

As an athletic youth who enjoyed wrestling, swimming, ice skating, gymnastics, and rowing, Eakins frequently sought to depict sportsmen in action.  But such images were disconcerting to an American public unfamiliar with such unconventional scenes.  Many decades later, in a 1970 article about “the first comprehensive exhibition of his work in New York in 53 years,” the Boston Herald Traveler described “The Swimming Hole” as “a monumental example of Eakins' outdoor figure compositions.” 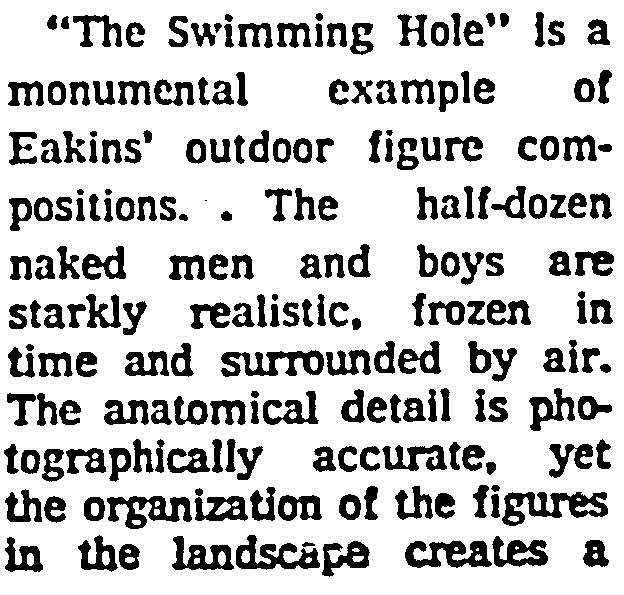 “The Gross Clinic,” his 1875 painting of Dr. Samuel D. Gross delivering a lecture while performing surgery, documented advances in surgical techniques.  Its uncompromising realism led to its rejection for Philadelphia's 1876 Centennial Exhibition and other major exhibits.

An 1878 New York Herald article, an excerpt of which is displayed below, notes that classes at the Pennsylvania Academy of Fine Arts have commenced, and that “the well known artist” Thomas Eakins is “assistant professor and chief demonstrator of anatomy.” A second mention of Eakins in the following paragraph notes the increasing interest in his work among European collectors. 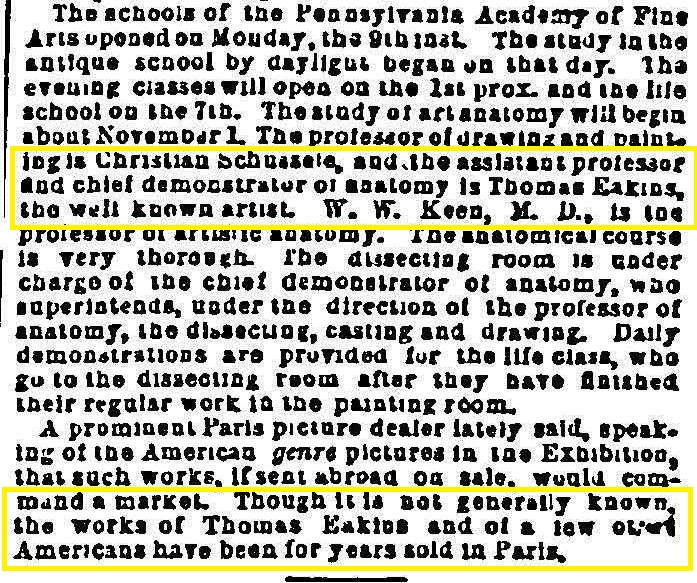 This announcement of his promotion to chief instructor appeared the next year, 1879, in the Philadelphia Inquirer, noting: Mr. Eakins studied abroad under the best masters, and has shown by some of his works that he is possessed of the highest order of artistic talent. 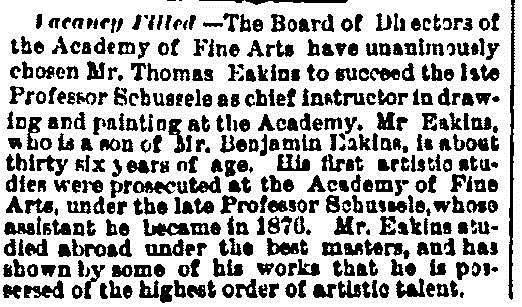 Critical appraisals of Eakins’ work during his lifetime were infrequent and brief. This excerpt from a review of the 54th annual exhibit of the National Academy of Design, which appeared in an 1879 issue of the New York Herald, describes his “Portrait of John H. Brinton,” a surgeon and friend of Eakins. The reviewer writes that Eakins paints “the carpet at the Doctor's feet with as much strength and care as he does his face.” 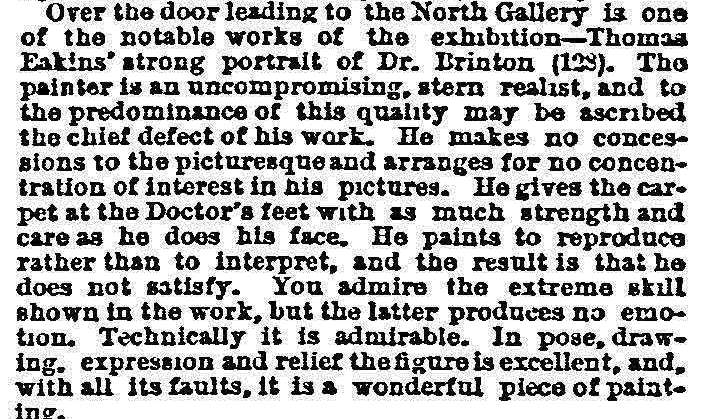 The forced resignation of Eakins as Director and Professor of the Pennsylvania Academy of Fine Arts in 1886 was the result of a collision of conflicting progressive forces. The late 19th century saw increasing numbers of young American woman students in the fine arts, once an all-male enterprise. Female students came mostly from genteel backgrounds, and their families generally preferred them to have little exposure to nudity. Advances in art instruction had led to an emphasis on study of the nude figure, of which Eakins was a prime proponent. When he removed the loincloth of a male model in a class that included young women, complaints prompted the President of the Board of Trustees to ask him to resign. He continued anatomy instruction at other institutions, but not without further controversy, as described in the New York Herald on March 15, 1895:

Professor Eakins has lectured on anatomy to art classes for ten years or more, and in that time has never used a bit of drapery....“I would prefer to lecture only to men,” said Professor Eakins, “but always give women the privilege of attending. I have never used any drapery, and would not have allowed the slightest rag.  There are a half dozen shapes and patterns of covering, but I think they are indecent.”

Yet Eakins had defenders, as seen in this Philadelpha Inquirer article published the next day:

If Professor Eakins made any mistake it was in consenting to lecture to students who would be better satisfied to paint flowers and vases... 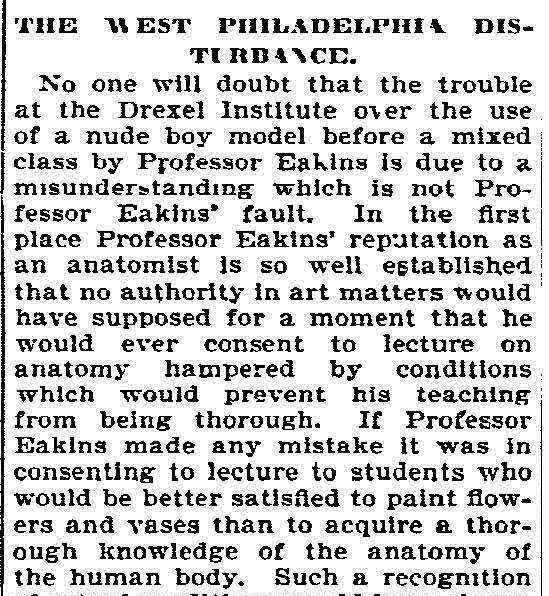 Later in life his achievements began to be recognized more widely.  When Eakins was 58, this 1902 article from the Philadelphia Inquirer described his portrait of African American artist Henry Ossawa Tanner, a former student of his:

Thomas Eakins has recently finished a strong portrait of the American painter, Henry Ossawa Tanner.  The Inquirer today reproduces this picture. It is a curious composition. The head is excellently well drawn and is an unmistakable likeness of the man.  As a composition, however, the canvas is obviously shirked. It is not Mr. Eakins at his best, though Mr. Tanner’s friends will recognize its value as a portrait. 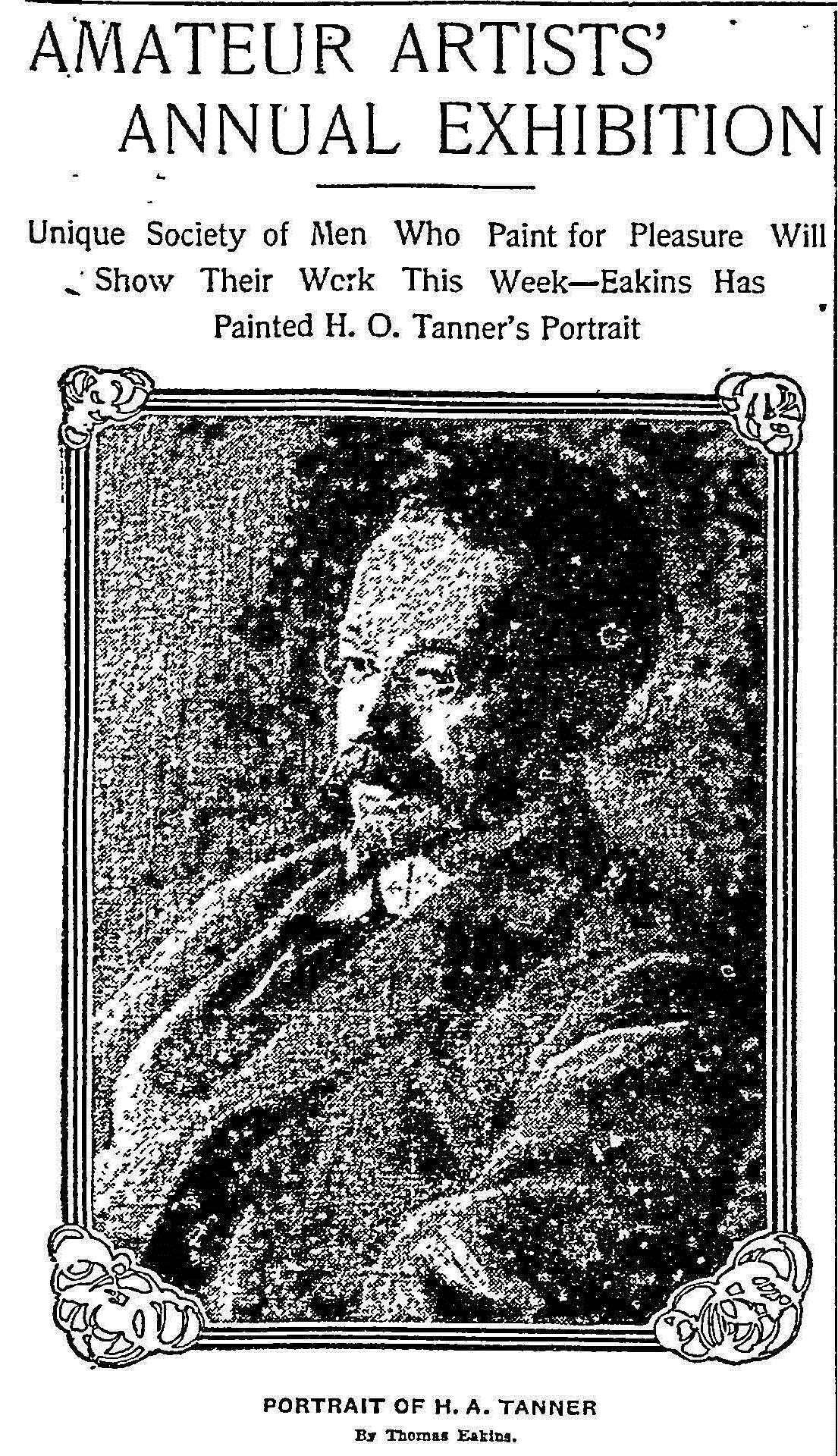 Two years before Eakins died, this 1914 article in the Philadelphia Inquirer described as a “sensation” Eakins’ study of surgeon David Hayes Agnew, which became the basis for his largest work, “The Agnew Clinic.” The same article also described the artist's growing reputation as an American master.

Eakins, who now lives a retired life in his house in Mount Vernon street, has many interesting stories to tell about his days as a great portrait painter.  How great a painter he is few of his contemporaries have fully realized, owing to this complete absorption in his work, and entire lack of the business methods to which artists have always been reduced in order to create for themselves the appreciation of a contemporary public.

His work has the inestimable qualities of a masterpiece.  It belongs to no particular epoch, and will stand always with the great things of the world.  The modeling of the Agnew head is of an extraordinary simplicity.  The personality of the man dominates the canvas, and we feel the impressive dignity of the surgeon, before the operating table, lecturing to his class.

It is understood that museums are already bidding against each other for the possession of this masterpiece. 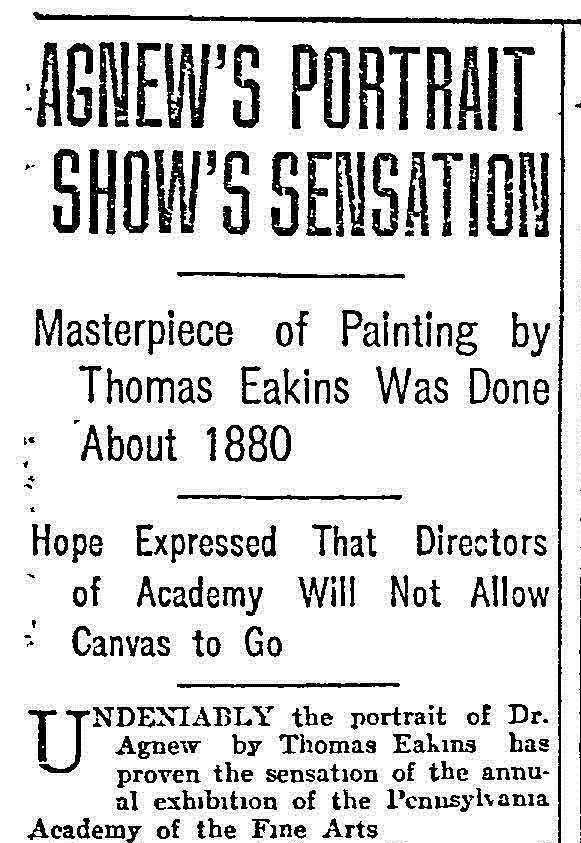 Eakins died on June 25, 1916, leaving a large body of work unique in its depth and commitment to realism.  His death did not pass unnoticed in his hometown, as seen in the following two articles, published within a week of each other in the Philadelphia Inquirer. The first, on June 27, 1916, cited his “remarkable skill” and “large achievement,” observing that “neither impressionism, futurism nor post-impressionism kept him from that honest effort to paint things as they are...” 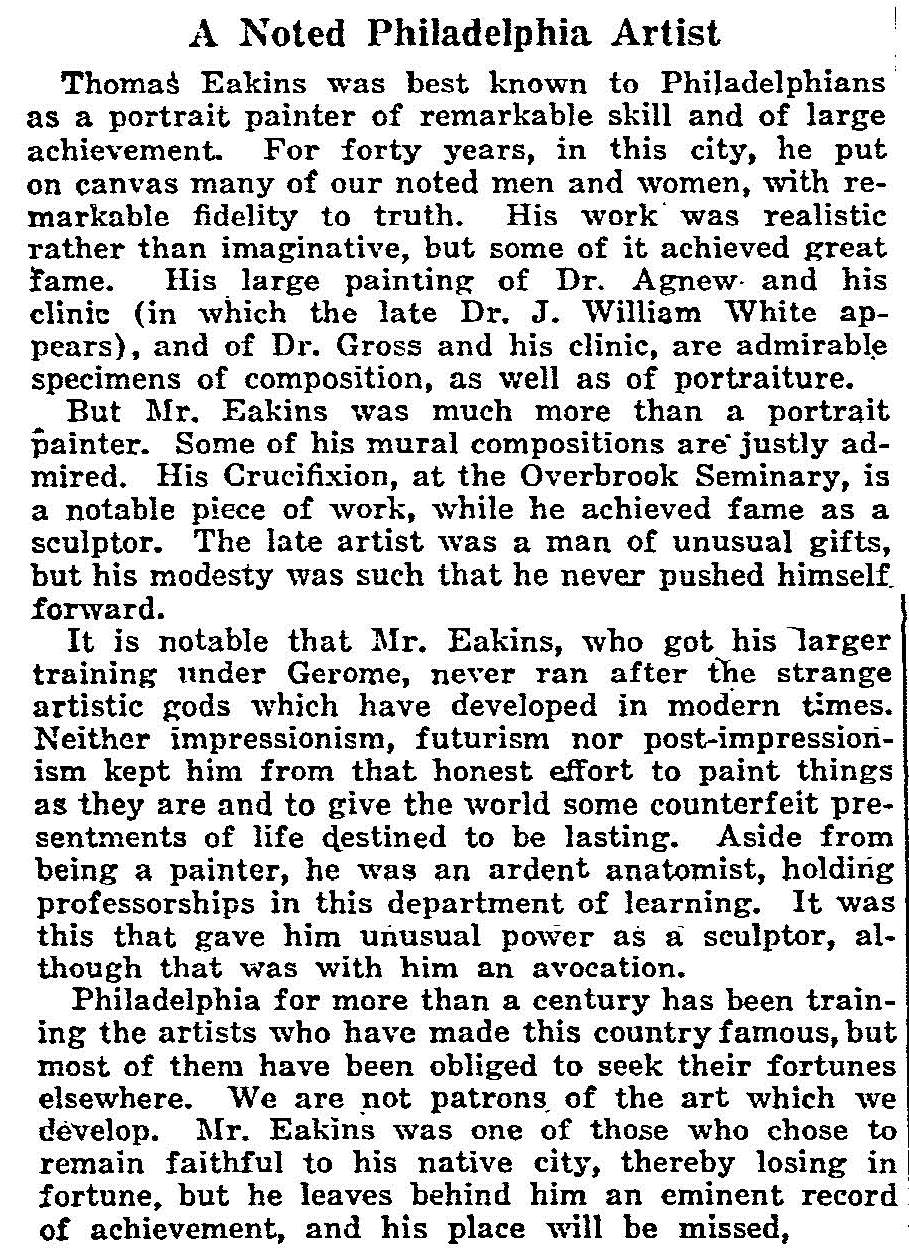 The second article —this full obituary published on July 2, 1916—concluded:

That his work will live when most of that produced by his contemporaries is forgotten has always been the first conviction of those who know....The loss of such a figure in this history of American art cannot be reckoned. 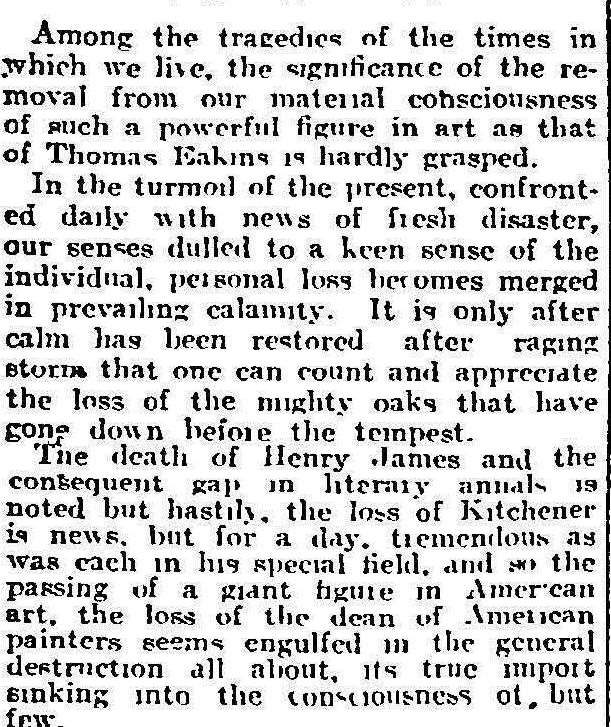 Deeming him the greatest painter of the day, the Metropolitan Museum mounted an Eakins exhibit in 1917—the year after he died. As the 20th century progressed, Eakins’s masterpieces were recognized and his greatness became celebrated. By the 1930s, many considered him to be the greatest American painter of the 19th century, as seen in this article headlined “America’s Rembrandt,” published in a 1933 issue of the Dallas Morning News:

Eakins took actuality that he knew well, and rendered it slowly and seriously. His portraits are convincing likenesses but without the slightest reference to the wealth, surface beauty or social station with which the average sitter thinks himself possessed. It is because of this uncompromising truthfulness and lack of saccharinity that Eakins has been somewhat neglected and will probably never become widely popular. 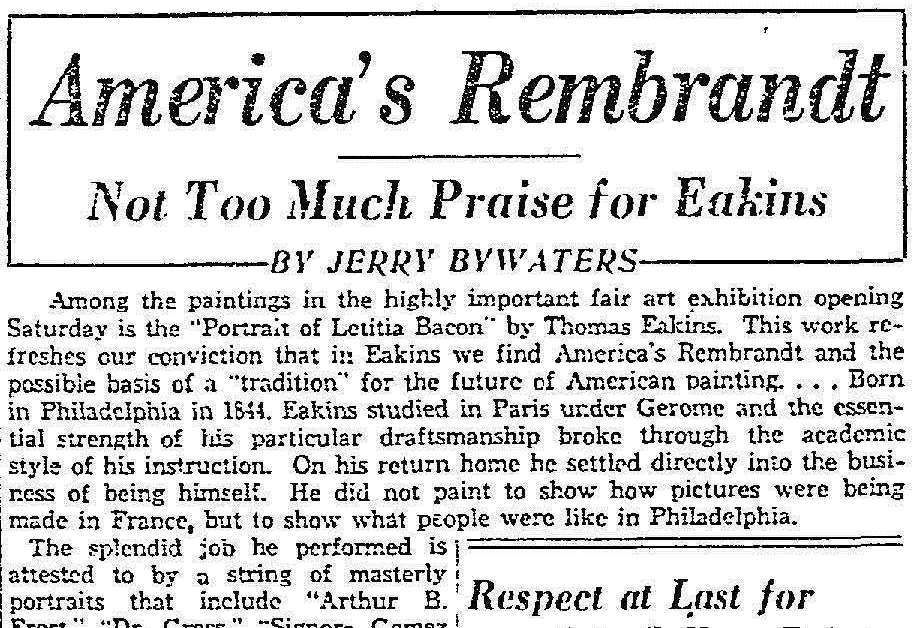 By 1974, in a Trenton Evening Times review of a documentary on Eakins’ many innovations, he is described as “an extremely powerful painter, the best America has produced,” and ten years later in the same newspaper the reviewer of a new Eakins biography states, “While his earlier portraits were of people in admirable pursuits, his later portraits were about humanity...”

As seen in the life of Thomas Eakins, historical newspapers can be used to reveal the conditions and forces behind the development of cultural innovators. These sources can also provide unique insight into popular and critical assessments of artistic accomplishments across the passage of time.