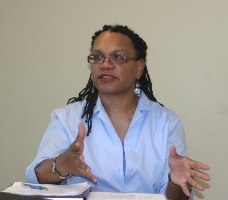 In this issue, Professor Joycelyn Moody challenges students in a Spring 2015 graduate seminar to collaboratively craft articles fueled by discoveries within Afro-Americana Imprints. Moody discusses the students’ work in the context of black/white relations post-Ferguson. The three student-written articles—also published here—focus on female interracial activism, the subtext of Christian abolitionist works, and the motives of 19th-century benefactors.

During the very first session of my Spring 2015 graduate seminar on “Revising Uncle Tom's Cabin: 19th-Century African American Novelists Respond,” I asked the students enrolled to begin generating ideas for the collaboratively authored papers they would later publish in The Readex Report. To stimulate use of the online resource Afro-Americana Imprints, 1535-1922: From the Library Company of Philadelphia, I assigned a focused timeline project. Because my seminar first met on Thursday, January 22, 2015, the course objectives included: “[To] Help students learn to situate themselves in the academy as raced sociopolitical beings.” To this goal, I added two online resources, Race—The Power of an Illusion and 12 Things White People Can Do Now Because Ferguson. If I were to generate now a timeline pinpointing political and cultural events surrounding the months during which my seminar students generated very different timelines, my own would include… > Full Story

Legh Richmond’s The African Widow, a pamphlet circulated by the Christian-based American Tract Society in 1827, unwittingly displays a poignant example of the role Christianity has played in the creation and continuation of stereotypes of African Americans. The stereotypes invoked in the readable didactic poetry of The African Widow depict what Toni Morrison has named the “Africanist presence.”[2] While white supremacists and other proponents of slavery used Christianity to dehumanize and subjugate black people, antebellum abolitionists ironically also exploited Christian networks as venues for their own sociopolitical agendas... > Full Story

Black and White women during the U.S. antebellum period participated in abolitionist and social activist work through a variety of organizational outlets. One of those outlets was the 1837 interracial Anti-Slavery Convention of American Women, documents of which—Proceedings of the Anti-Slavery Convention of American Women (1837) and An Appeal to the Women of the Nominally Free States Issued by an Anti-Slavery Convention of American Women (1837)—appear in Readex’s online collection Afro-Americana Imprints, 1535-1922: From the Library Company of Philadelphia.  Understanding how women from racially diverse backgrounds worked together toward social change in the U.S. could serve today as an illuminating example for students concerned with racial discord and interracial relations in our nation, both then and now... > Full Story

African American Education and Postbellum Ambivalence: A Look at the Relationship between the Presbyterian Church and Lincoln University

This lesson plan will provide freshman-level college students with skills in using Afro-Americana Imprints, 1535-1922, a Readex digital collection, and with historical knowledge of impediments (sometimes unwitting) to the self-actualization of black peoples after the American Civil War. Most crucially, this unit is designed to make students aware of the ways in which the postbellum philanthropic and predominantly white Presbyterian Church demonstrated ambivalence about contributing funds to support Lincoln University. This all-black college is defined in the Presbyterians’ 1866 Annual Report as a “pioneer Seminary for the instruction of young colored men” (“Forty-seventh annual report”45). While freed black people strove to build schools for themselves and pursued other forms of self-actualization immediately following the Civil War, they nonetheless needed to rely on white wealth and philanthropy to develop institutions of higher education... > Full Story

Subscribe today to receive the next quarterly issue of The Readex Report in your inbox. Browse previous issues in our archive. If you would like to suggest or contribute an original article, please email The Readex Report editor.