Whitman in Wisconsin: Uncovering his Legacy with "Labor-Saving Machines"

No labor-saving machine,
Nor discovery have I made;
Nor will I be able to leave behind me any wealthy bequest to found a hospital or library,
Nor reminiscence of any deed of courage, for America,
Nor literary success, nor intellect—nor book for the book-shelf;
Only a few carols, vibrating through the air, I leave,
For comrades and lovers.

In a rare moment of humility recorded in this poem, Walt Whitman was circumspect about his legacy. His lasting contribution to the world would be no "labor-saving machine," or act of philanthropy. Even Leaves of Grass, into which he had collected a lifetime of reflections and assertions about democracy, the body, the spirit, the physical world, seemed transient. Earlier Whitman had predicted a demand for "copious thousands of copies"1 of Leaves of Grass, but here sees no "literary success" as his lasting achievement. Whitman instead saw his legacy as a ripple in the zeitgeist, "a few carols vibrating through the air" to perhaps be tuned in later by likeminded souls.

, Colonial Music Institute and author of Dance and its Music in America, 1528-1789

In 1976 the American Bicentennial created an audience for information about early American dance, but no scholarly resources were available. I took on the challenge and since that time have collected and indexed the raw materials with the help of two grants from the National Endowment for the Humanities (EASMES and PACAN).

Today many relevant primary sources are available online, and some—including several found in the Archive of Americana—challenge widely accepted historical understandings. From these and other resources, I have just completed a comprehensive history of dance in colonial America, covering dance of Native peoples as well as of European and African immigrants. 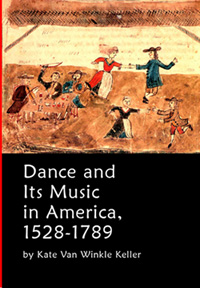 Here are a few examples of recent findings that have broadened our knowledge of music and dance in 17th- and 18th-century America.

Searching Mary Rowlandson’s description of her experience at a Wampanoag victory dance in 1675, I discovered that the festive clothing of her captors had incongruous European elements probably obtained from traders. Rather than the usual deerskin loin cloth, quill decorations, and detailed body paint, "he was dressed in his Holland shirt, with great laces sewed at the tail of it, he had his silver buttons, his white stockings, his garters were hung round with shillings. . . she had fine red stokins, and white shoes, her hair powdered and face painted red, that was alwayes before black" (Rowlandson, 57).