Confessing to Nothing: The Agency of Confession in Nat Turner and John E. Cook

On October 16, 1859, the white abolitionist John Brown and 21 followers attacked the Federal arsenal at Harpers Ferry, an event that secured Brown a place in the hall of iconic American personalities and which, paradoxically, obscured the men who sacrificed with him. Indeed, while volumes have been filled about Brown, there is a serious dearth of information surrounding his band of militants, so much so that many students might believe Brown acted alone. One such militant in particular was so invaluable to Brown’s campaign that it would be historically ignorant to overlook him. 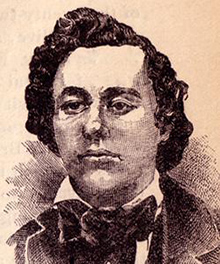 His name was Captain John E. Cook, brother-in-law of Indiana Governor A.P. Willard, poet, womanizer, respected abolitionist—and if it weren’t for the Afro-American Imprints collection—a continued mystery for myself and others. A Readex Archive of Americana collection, Afro-Americana Imprints, 1535-1922: From the Library Company of Philadelphia is an enormous archive of important documents relating to the African-American literary and cultural experience. The collection represents more than just a compendium of slave narratives; it is a gateway to a hidden cultural past shared by slaves, freemen, abolitionists, slave owners, writers and activists. It should truly serve as the logical starting point to any scholarly inquiry related to pre-20th century African-American studies. 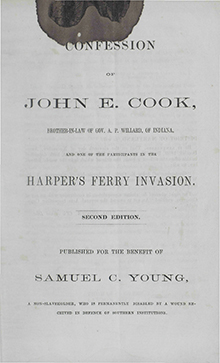 Housed in Afro-Americana Imprints, Cook’s confession of his role in the raid is worth studying for at least two reasons: it broadens our understanding of the logistics of the raid and, in the age of greater literary awareness, provides a framework for conceptualizing the criminal confession narrative as a distinct genre. To better understand the latter, I will compare John E. Cook’s “white” confession to that of the “black” confession offered up by Nat Turner for his part in his eponymous rebellion 28 years earlier. 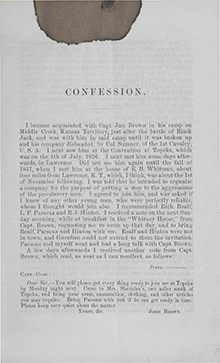 From Confession of John E. Cook.
Click to open full page in PDF.

Before stumbling across Cook’s confession, what little I knew about Brown’s raid came from textbooks that posited Brown as the supreme strategist behind the assault. What I discovered from Cook’s confession, however, was that John E. Cook was the man ultimately responsible for the location of the attack, as he had lived in Harpers Ferry for the better part of a year before the raid (Cook 6). The first aspect of the confession that caught my attention (perhaps for obvious reasons) was the title page; printed beneath the title is the statement, “Published for the benefit of Samuel C. Young, a non-slaveholder, who is permanently disabled by a wound received in defense of Southern institutions” (Cook 1). This statement contrasts with the much more rhetorically charged statement found beneath the title of Nat Turner’s confession: “Also, an authentic account of the whole insurrection, with lists of the whites who were murdered, and of the negroes brought before the court of Southampton, and there sentenced, . . .” (Gray, Turner 2).

Immediately we see a disconnect between the two confessions: Cook’s confession is an act of charity and therefore a mechanism of empowerment; Turner’s is a record of violence and thus a disempowering text. The empowerment of Cook’s “white” confession is reinforced by the fact that he wrote the text. Turner’s confession, on the other hand, is clearly disempowering by the fact that his words aren’t entirely his words. They are largely the words of his lawyer, Thomas Gray, who transcribed the text and editorialized it. Thus, while Cook wholeheartedly confesses, or at least appears to, Turner doesn’t really confess to anything at all—Thomas Gray does. 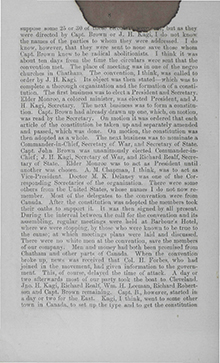 From Confession of John E. Cook.
Click to open full page in PDF.

Like Turner’s confession, Cook’s confession progresses logically. The first nine pages of his 16-page pamphlet introduce the political structure of the raid, detailing everything from the initial meeting between Brown and Cook at the “house of E.B Whitman, about four miles from Lawrence, K.T., . . .” (Cook 5) to the 1858 convention in Chatham where the object was to “complete a thorough organization and the formation of a constitution” (Cook 8). It is important to note Cook’s detailed assessment of the power structure. Not only does he list important positions within the revolutionary “government,” such as naming J. H. Kagi secretary, his insistence on the top-down hierarchal power structure of the raiding party creates avenues of blame; his only crime, therefore, becomes following orders. Turner’s power structure is much more disempowering.

According to Turner (or shall we say Gray’s editorializing), the impetus for the rebellion lay in irrational heavenly guidance, not the Westernized systems of rational governance, and the actual planning of the assault occurred on the evening of August 20th in the woods where Turner and his men “remained at the feast, until about two hours in the night, when we went to the house and found Austin . . .” (Gray, Turner 8). Whereas Cook’s checks-and-balance’s power structure empowers him by attempting to remove blame, Turner’s communalistic system thrusts blame upon him. Furthermore, while Cook’s confession presents a much more premeditated attack and thus looks worse when considering the death penalty in a 21st-century context, Gray’s writing gives Turner’s rebellion an impromptu “angry black male” vibe, a raid triggered by alcohol (“they all went to the cider press and drank, except myself” (Gray, Turner 8) and utter hatred. Presenting the rebellion in this light all but seals the fate for Turner who must represent himself against a white readership rendering a guilty verdict even before the details of the rebellion emerge.

Unlike the account of Turner’s assault, a narrative in which Turner plays a central role in the bloodshed, Cook’s participation in Brown’s raid is periphery at best. Cook maintains that he stood guard at the rebel armory located at the Harpers Ferry schoolhouse during the opening shots of the engagement and was “in the dark” for most of the raid. “A short time after the departure of Tidd I heard a great deal of firing and became anxious to know the cause,” writes Cook, “but my orders were strict to remain at the school house and guard the arms, and I obeyed the orders to the letter” (Cook 12). Eventually, Cook deserts his post and ventures into the town where he witnesses, but does not immediately take part in, the assault. When he does participate, it is only to save his now surrounded “party,” and his vantage point is a mountain tree far removed from street combat where he can provide enfilade fire on his opponents and draw their fire away from his comrades. After “descending from the mountain,” Cook requests information from a William McGregg who relays the bloody consequences of the attack: Brown is dead, as are a majority of his men (Cook 13). Cook then proceeds to Brown’s house outside of town where he regroups with the survivors and plans his next course of action.

Cook’s role in the raid is therefore one of privileged observer. I say privileged here because his account of the attack itself is couched in rhetorical terms: he is merely a martyr attempting to save his surrounded band of cohorts from sure destruction, a destruction that he observes but does not directly participate in. In short, he watches the killing but does not kill. His fighting is romanticized and distant. In a court of law, he would be considered a witness, not necessarily a full-fledged participant, his only crime being martyrdom with revolutionary zeal.

Turner’s participation in his rebellion, however, is much more bloody. Whereas Cook defends himself through rhetoric of distance, Gray effectually prosecutes Turner via rhetoric of proximity. Turner is placed at the center of the engagement from the very beginning; his fate is sealed from the very first murder: “It was then observed that I must spill the first blood” (Gray, Turner 8). And whereas Cook describes himself as an aggressor only when provoked, Gray’s language posits Turner and his men as unprovoked aggressors. They are described as traveling from plantation to plantation murdering entire white families with axes and “commencing the work of death” (Gray, Turner 9). Turner’s party continues to grow in size until the virtuous Captain Peete arrives with a detachment of militia able to “arrest the progress of these barbarous villains” (Gray, Turner 10). Like Cook, Turner then retreats to a place of distance, “a hole under a pile of fence rails in a field” (Gray, Turner10). Unlike Cook, Turner’s concealment is reminiscent of Harriet Jacobs’ attic space. He becomes an observer, but only after Gray’s language condemns him, and he’s no longer privileged, but disempowered by virtue of his cramped space. In actuality, his “confession” and Gray’s editorializing have already confined him into a space of guilt.

The conclusions of both confessions further provide a site of contrast. Cook’s is especially intriguing for it ends not with an admission of guilt, nor a plea for leniency, but a continued reliance on rhetoric of distance. He uses the final paragraphs to challenge assumptions made by various newspapers that he was Brown’s “chief aid” (Cook 14). And in a rather unusual and compositionally awkward move names an accomplice, Richard Realf, and various other members of the insurgency. He then goes on to include a lengthy biography of Realf that must be interpreted as an act of agency intended to further distance himself from blame. In fact, the confession ends on a name—Stewart Taylor—that he willfully provides.

Like Cook’s confession, Turner’s also ends with the naming of various members of the insurgency. Yet unlike Cook’s willful, and methodical, inclusion of names, it is Gray who name-drops to the detriment of Turner. Not only does he include “A list of persons murdered in the Insurrection, on the 21st and 22d of August, 1831,” a list that is decidedly all white, he also provides a full “List of Negroes brought before the Court of Southampton, with their owners’ names, and sentence” (Gray, Turner 13). This act of naming in a “black confession” rhetorically closes the gap between criminal and crime, while name-dropping in a “white confession” such as Cook’s distances the confessor from the site of violence. Although much is still to be learned about the men who sacrificed with Brown, Cook’s confession provides a nice starting point for a continued discussion of the role of divulgence in a “white” and “black” context. Whereas Cook’s confession functions as an act of agency intended to remove blame, Turner’s—being largely editorialized by a white author—becomes a prosecutorial tool even before his arraignment. With the help of Readex’s Afro-Americana Imprints, one can revisit undervalued documented confessions, such as Cook’s, so that claims can be made regarding the structure of “white” and “black” confessions. Perhaps then Turner can “confess” with an agency previously denied him, and history will give Cook more than just a passing glance.

Cook, John, E. “Confession of John E. Cook, brother-in-law of Gov. A.P. Willard, of Indiana, and one of the participants in the Harper's Ferry invasion. Published for the benefit of Samuel C. Young, a non-slaveholder, who is permanently disabled by a wound received in defence of Southern institutions”. Charleston, W.V.: 1859. America’s Historical Imprints: Afro-Americana Imprints, 1535-1922: From the Library Company of Philadelphia. Readex, Web. 02 November 2013.

Gray, Thomas, and Nat Turner. “The Confessions of Nat Turner, The Leader of the Late Insurrection in Southampton, VA. as fully and voluntarily made to Thomas R. Gray.” Baltimore: Thomas L. Gray. 1831. Electronic Texts in American Studies, Digital Commons at Libraries of University of Nebraska-Lincoln. Web. 02 November 2013.