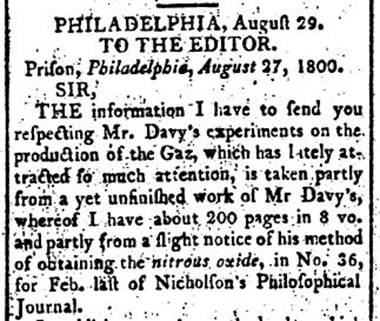 In 1798 physician Beddoes opened his Pneumatic Institution in Clifton, just outside Bristol, England, after several years of planning and fundraising. In October his newly hired research director, Humphry Davy, joined the effort. The Institution would provide clinical care, teaching and research, an unusual combination for the time.

Davy embarked upon a bold research effort, trying many different gases on himself as he searched for ones that could be useful in Beddoes’ search for therapeutic gases. At one point he nearly killed himself, but he finally tried nitrous oxide and found what they hoped would be the perfect gas to use as a medicine, especially on consumptive patients. With equipment designed by Scottish inventor James Watt and others, Davy and Beddoes spent hours each day breathing vast amounts of nitrous oxide. They were joined at various times by individuals present in Bristol and part of Beddoes’ circle: Samuel Taylor Coleridge, Robert Southey, Peter Mark Roget and others as well as many patients at the Institution. Novelist Maria Edgeworth and publisher Joseph Cottle were among the observers.

Davy detailed all of the laboratory, animal and clinical research in a book of 580 pages published in July 1800.  That book is a painstaking account of the gas work at the Institution, detailed and profusely illustrated and containing more than 100 pages where individuals describe their reactions to nitrous oxide inhalation. 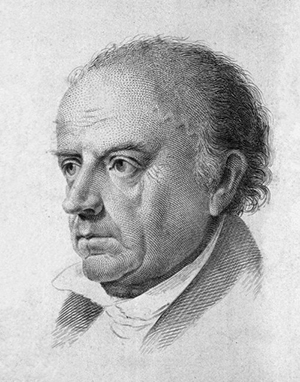 Thomas Cooper, the author of the letter published in The Telegraphe and Daily Advertiser, is another fascinating individual of the period. Born in England, he studied law, medicine and the natural sciences before entering a printing business. He promoted religious tolerance and visited France with James Watt, Jr., after the French Revolution. Cooper’s friend Joseph Priestley, the English theologian and chemist, wrote him a letter of introduction to French scientist Antoine Lavoisier.

When Priestley fled to the United States in 1794, Cooper followed. He soon took up political activity in his new country, joining the campaign against the Alien and Sedition Acts. In October 1799 a newspaper published his vociferous attack on President John Adams. He was tried for libel, fined $400 and spent six months in jail. In later life Cooper held various academic appointments including chemistry professorships at the Universities of Pennsylvania and South Carolina.  As controversial in the U.S. as he had been in Britain, Cooper died in 1839.

Thus when Cooper’s letter appeared in the Baltimore newspaper in August 1800, he was in prison for sedition. He immediately tells his readers that he possesses about 200 pages of “a yet unfinished work of Mr. Davy’s.” That is presumably the first third or so of Researches, chemical and philosophical: chiefly concerning nitrous oxide, or dephlogisticated nitrous air, and its respiration. The book had been published by the London firm of Joseph Johnson.

The material Cooper had may have reached him via friend Priestley. These pages describe Davy’s laboratory work in preparing nitrous oxide and determining its chemical behavior. He notes Davy’s experiments have “lately attracted so much attention,” perhaps a reference to a brief notice Davy had published in February 1800 in Nicholson’s Journal, “On the nitrous oxide” which announced to the scientific world that the gas could be respired by humans.

Much of Cooper’s letter is devoted to descriptions of various ways to make nitrous oxide and the relative purity produced by each method. However, the letter is sprinkled with hints that Cooper has done his own laboratory research: “I procured,” “I am satisfied from my own experiments,” and so forth. He does not say, but presumably this work was done before he entered prison! [Fig. 3] 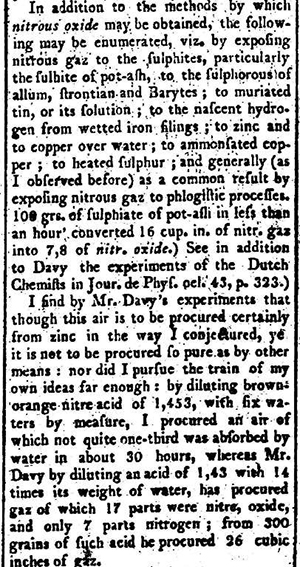 He makes another intriguing statement in his letter: “The public may rely upon the truth and accuracy of the statements of the effects Dr. Beddoes has given.” In December 1799 Beddoes published a pamphlet Notice of Some Observations which outlined the research in England and included accounts from various individuals who described their reactions to respiration of the gas.

Cooper closes his letter with the declaration that “I have thus gleaned what I think most necessary from Mr. Davy’s book” although stating he could have said more. [Fig. 4] I suspect this letter marks the first substantial account of Davy’s nitrous oxide research in an American publication. 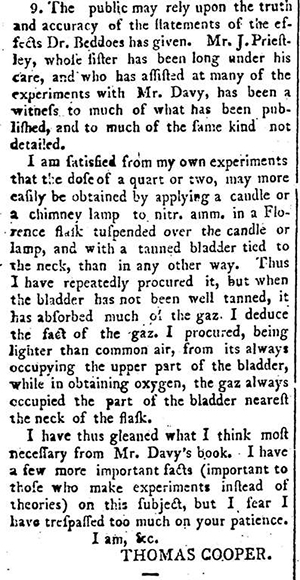 A pamphlet by W.W. Dawson published in 1860, Chloroform Deaths [Fig. 5], is from a different era of medical practice. Davy had hinted at the pain-relieving properties of nitrous oxide inhalation, but he and Beddoes did not pursue it. Why they didn’t is a question much debated by medical historians. When Dawson, a professor at the Medical College of Ohio, issued his pamphlet, ether, chloroform and nitrous oxide were well established as surgical pain relievers. The issues of his day revolved more around side effects and mortality. 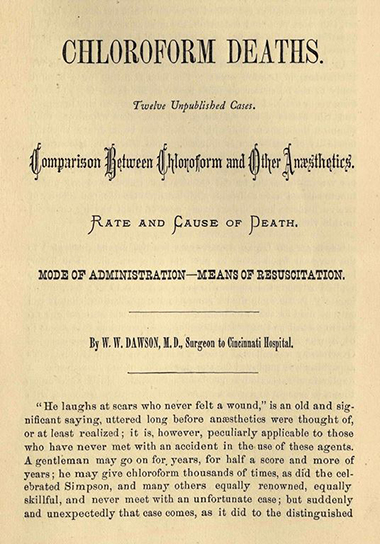 Concerns about chloroform deaths began soon after discovery of its anesthetic properties in November 1847. In late January 1848 a fifteen year-old female named Hannah Greener died in Great Britain minutes after receiving chloroform for a toenail removal. Several months earlier she had undergone a similar procedure with ether and encountered no problems. Whether she is the first anesthetic death is another debated topic, but ever since she has been widely perceived as such.

Chloroform mortality is an issue closely examined in Dawson’s pamphlet. His series of subtitles almost serves as an abstract: “Twelve Unpublished Cases,” “Comparison Between Chloroform and Other Anaesthetics,” “Rate and Cause of Death,” and “Mode of Administration—Means of Resuscitation.”

Dawson was a prolific medical author in the 1860s and 1870s and “Surgeon to Cincinnati Hospital” as his title page announces. He begins by discussing the death rates of various widely-used anesthetics, including chloroform, ether, nitrous oxide and a chloroform/ether mixture. [Fig. 6] Dawson quotes figures that demonstrate much higher rates for chloroform than ether, nitrous oxide or the mixture. He also notes that he feels chloroform deaths were actually much higher than collected reports indicate.

Dawson describes the irony of chloroform use—mortality was much higher, and yet its use remained widespread due to its advantages over ether and nitrous oxide. [Fig. 7] He spends the first third of the pamphlet discussing the pros and cons of ether and chloroform in addition to the mortality rates.

A large section of the work is devoted to the twelve unpublished cases. Here Dawson details each, giving locations, doctors involved, and discusses specifics of each one. Anesthetic mortality has always been a problematic event in medicine. Some cases are obviously due to the anesthetic, but others may also involve the poor health status of the patient or the desire of physicians to divert blame.

Dawson’s pamphlet ends with discussions of causes, methods of prevention, administration of the anesthesia, and resuscitative efforts. The work is a competent summary of the issues surrounding anesthetic mortality in 1860.

Broadsides were often single printed sheets that served as advertisements for coming events, and that is the case with this playbill printed in 1853. The text tells us that this “Extraordinary Attraction” will have two performances per day at the Masonic Hall on Chestnut Street in Philadelphia. This show included several acts. The four-year-old Master George, the “INFANT DRUMMER,” could play more than one hundred songs. B.S. Bowen, the “Celebrated Banjoist” from New Orleans entertained with “Come Back, Stephen” and other various “Ethiopian Melodies.” Another performance involved “Life-Moving Figures” doing an “Italian Fantocini,” a dance number.

However, much space on the broadside is reserved for an exhibition involving “Gas! Gas! Gas!,” “Nitrous Oxide” and “Laughing Gas.” This portion of the playbill brings us to the medical connection. Between the work of Beddoes and Davy with nitrous oxide in Bristol in 1799 and 1800 and its use in dentistry by Horace Wells in 1844 and 1845, inhalation of the gas became a source of exhibition and entertainment in chemistry classrooms, public performances and private parties. In December 1844 Wells attended a performance by Gardner Quincy Colton in Hartford, Connecticut, and realized such inhalation could be used for pain relief. Colton himself toured the eastern United States with these shows until the late 1840s.

“Prof’r Greenwood,” identified near the bottom of the broadside as “Dr. J.T. Greenwood” in connection with the fantoccini dance, may be the John Greenwood, Jr. who worked at P.T. Barnum’s American Museum in the 1850s and 1860s. In his autobiography, Barnum described his employee this way: “As he is a modest gentleman, who would be the last to praise himself, allow me to add that he is one to whose successful qualities as a caterer for the popular entertainments, the crowds that have often filled this building may well bear testimony.”

A.J. Wright, MLS, worked as librarian for the Department of Anesthesiology, University of Alabama at Birmingham School of Medicine from 1983-2015. He has published numerous articles related to the history of anesthesia.