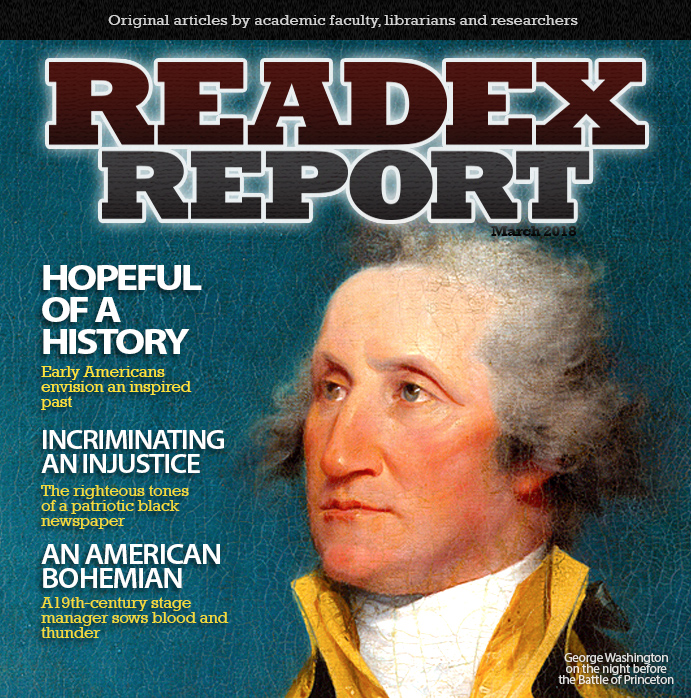 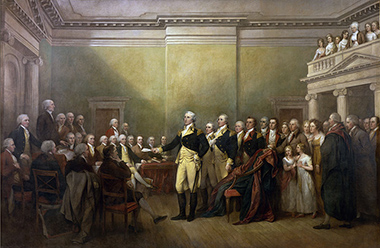 In the 1780s, Americans, too, awaited their own history. William Gordon, a pastor at Roxbury in Massachusetts who had emigrated to the colonies in 1770, was widely known to be writing the first full history of the Revolution by someone living in America.[2] In 1784, newspapers from Massachusetts to South Carolina reported that Gordon had petitioned Congress to access its papers for his research.[3]Gordon’s suitability for the job of being the first American historian of the Revolution, however, was a topic of some debate in the nation’s newspapers over the next two years.[4]  Some worried upon notice of Gordon’s plan to return to England and have his manuscript published there. Actually, he had decided to publish in London to try to maximize his profits, particularly by minimizing the inevitable unauthorized reprints so common in Anglo-American print culture. 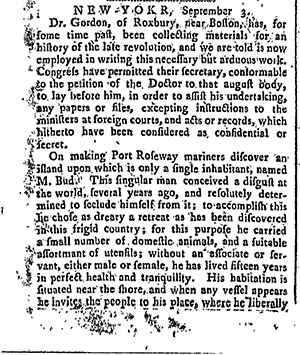 Nevertheless, that the first history of the Revolution would be published in England aroused anger and suspicion. One writer called Gordon “the Divine Beggar of Roxbury,” referring to his having asked subscribers to his History to pay the unusually high down payment of half. Others suspected he was publishing in England because his History was unfavorable to Americans.[5]

He was referred to as “the British Historian of our Revolution.”[6] 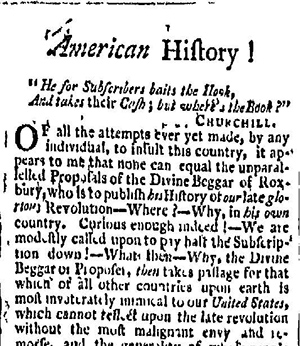 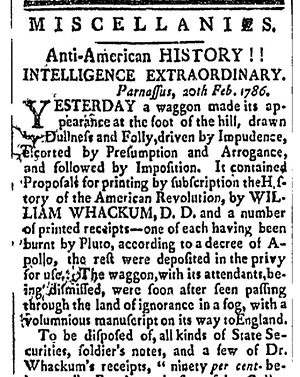 After all, from these writers’ perspective, why would a London printer publish a work that was sufficiently critical of Britain (as any true American history of the Revolution must be)?[8] 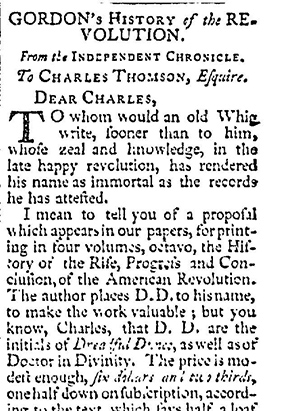 In fact, by the time Gordon’s History was published in London in 1788, it had changed greatly from the original manuscript he had carried from America. First, it changed from narrative to epistolary form. Later rumors suggested that the original manuscript was deemed unsaleable by British publishers and that Gordon allowed it to be rewritten so as to be more “agreeable to English readers.” Indeed, in the “Preface” of his own copy of the first volume, John Adams claimed that publishers refused to take it unless “the sincerity of reflexion on the English were not softened, and if the Praises of the Americans were not moderated.” Adams noted, “All this was done. And if Gordon’s original manuscript should be preserved, all this in substance will appear.”[9]

One writer recalling the work in 1822 noted, “In 1790, I embarked for England, where I was introduced to a relation of Doctor Gordon, of whom I enquired how the Doctor had succeeded in his history? He smiled and said, ‘It was not Doctor Gordon’s history!’”[10] The “relation” went on to say that a friend Gordon had shown the manuscript “declared that it was not suited to the meridian of England” being “too favourable to the Americans.” He then claimed that Gordon turned it over to a “professional gentleman” to “be new modelled, and made agreeable to English readers.” The writer concluded, “If any of our historical or antiquarian societies, could obtain Gordon’s original manuscript, it would be an invaluable document.” However, the original manuscript has never been located. Yet, the suspicion, anxiety, and angst that surrounded its publication was very real. Americans kept their eye out. In late 1786, one newspaper reported, “We have search’d . . . the London news-papers, for intelligence respecting Dr. Gordon, and his History––but none can we find––both the History and the Historian appear there to be wholly ‘unnoticed or unknown.’”[11]

Gordon’s History was never really popular in the United States. It was excerpted in newspapers in 1788-9, primarily because it was the first full history of the Revolution, but it was quickly superseded by David Ramsay’s History of the American Revolution, which was published in early 1790. Ramsay’s History was excerpted widely and a look at early national library catalogues shows it to have been much more widely available than Gordon’s. Nevertheless, while Ramsay’s work became the most popular history of the Revolution in the early national period, Gordon’s History retains its importance due to its having been the first full history of the Revolution. And, just as importantly, the reactions it engendered in the 1780s even before it was published suggest just how anticipated a national history was and how crucial a newly shared past was understood to be to the survival of the new republic.

[2]. In 1785, David Ramsay published his History of the Revolution of South-Carolina.

[9]. William Gordon, The History of the Rise, Progress, and Establishment, of the Independence of the United States of America, 4 vols. (London: Charles Dilly, 1788), Preface, in John Adams Library, Boston Public Library.