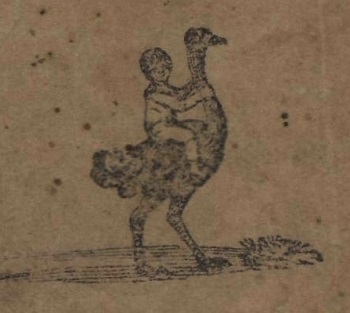 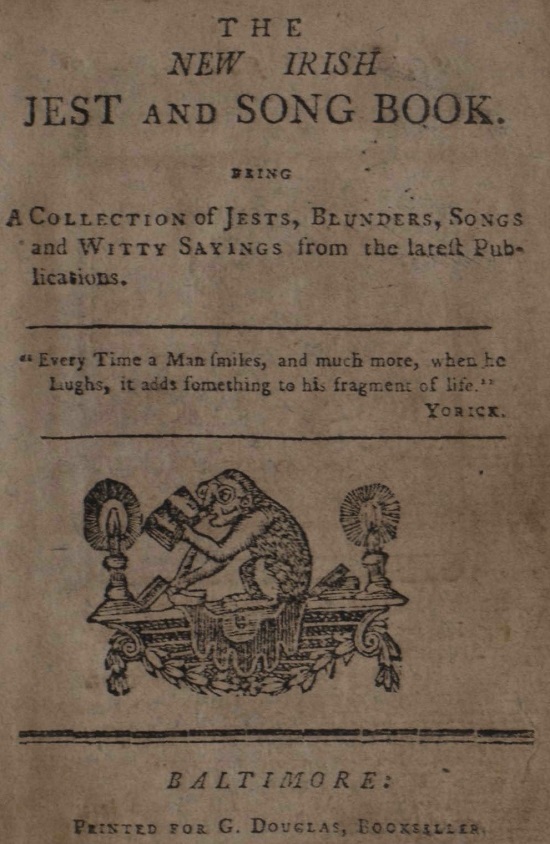 Merriam-Webster defines pawky as “artfully shrewd: canny.” As the subtitle promises, there are myriad anecdotes and songs, and as the author promises in the quote above, they may be funnier when properly delivered as opposed to in print. Lawyers, doctors, and clergymen as well as the aristocracy and politicians are frequently the targets of this humor. Attempting to describe or explain a joke is the surest way to exhaust it of humor. Rather, below please find curated examples “of jests, blunders, songs, and witty sayings.”

“Why not send for a doctor?” said a man to his friend. Because (replied he) “though very ill, I do not yet wish to die.”

A certain field preacher, in explaining to his congregation the nature of hell, told them he had lived there eleven months. “It is a great pity, said one of his hearers, that you did not stay a month longer, for then you would have gained a legal settlement.”

A barrister, not overburdened with abilities, had pleaded in the court of Chancery, the case of some orphans. As the lord chancellor was going out, the counsel entered into some conversation with him, and said he hoped he had been successful in exciting his lordships compassion—“You have indeed. (said the chancellor) I pity you very much.”

It was said of a Bath physician, that he could not prescribe even for himself without a fee, and therefore, when unwell, he took a guinea out of one pocket, and put it into the other.

“Silence! silence! silence in the Court!” exclaimed an Irish Judge at a country Assize, “is it not monstrous that you will not keep silence? this day we have decided a dozen cases, and not heard a word of one of them!” 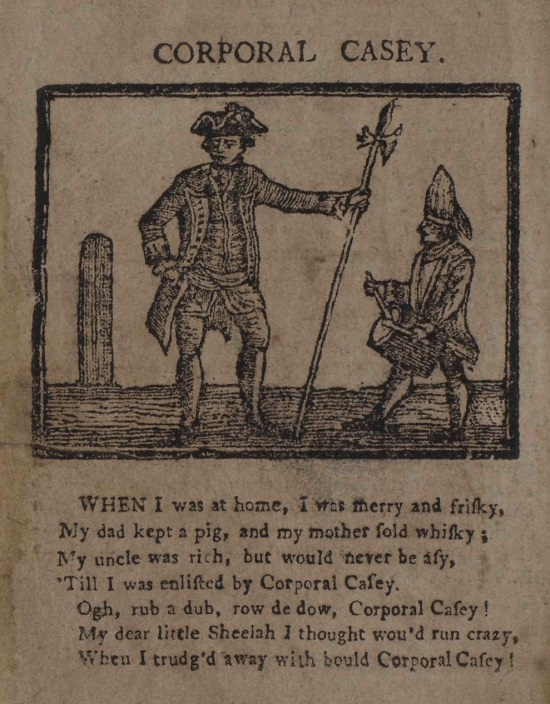 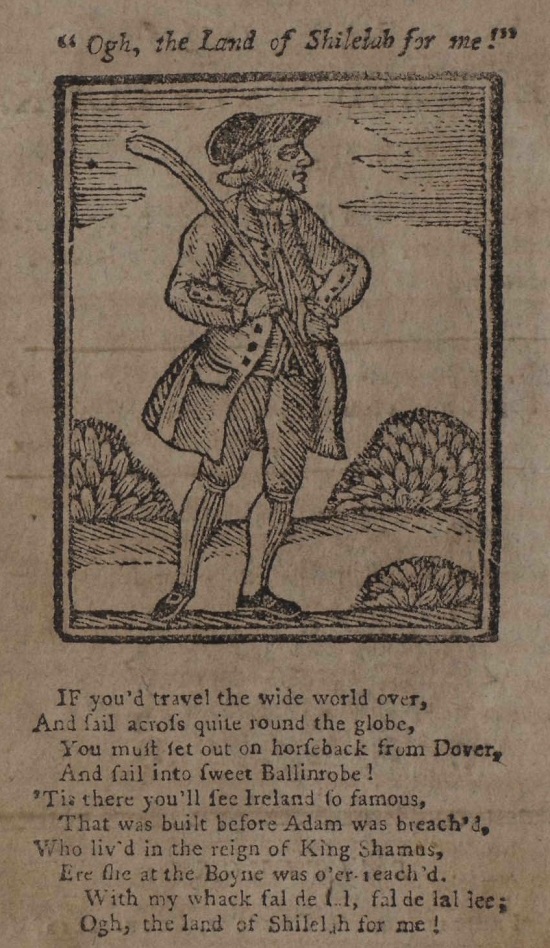 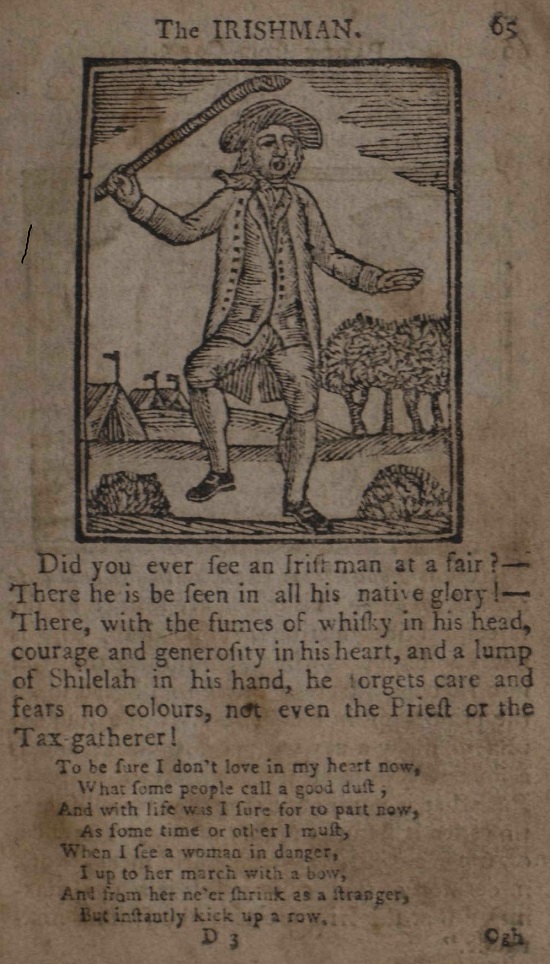 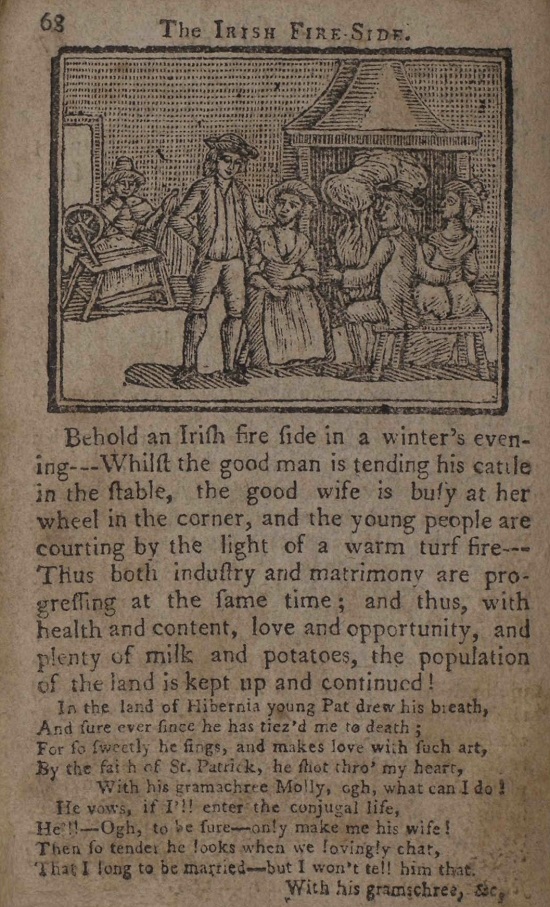 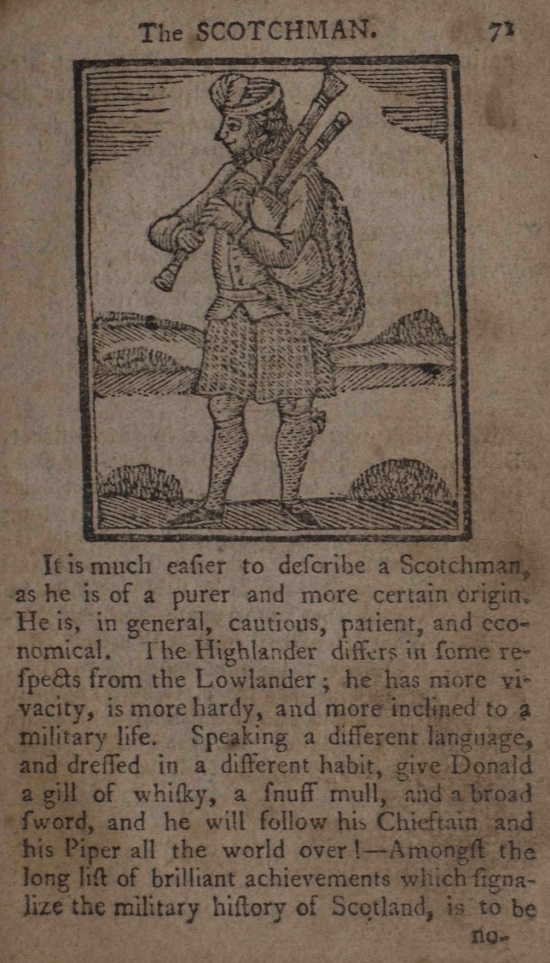 The Brazier, A Pathetic Tale: Embellished with Engravings (1816) 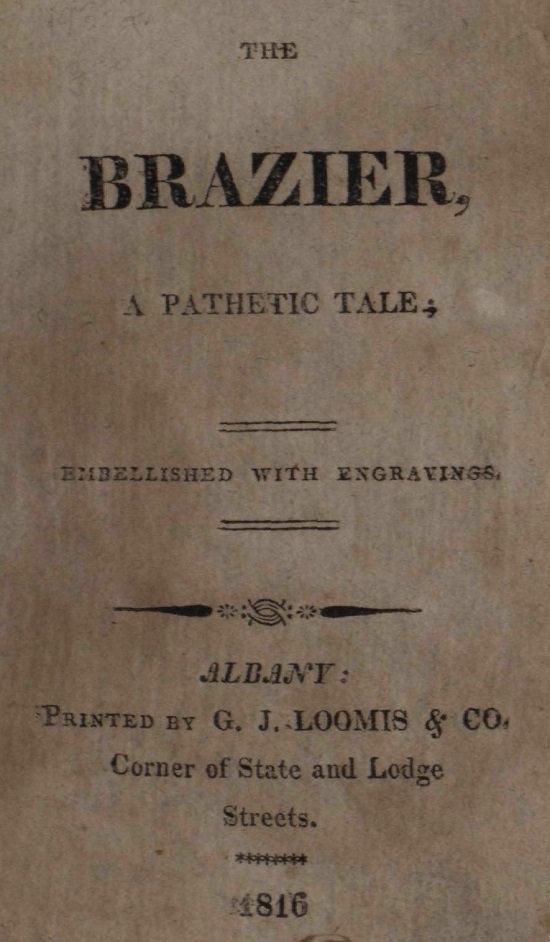 This curious imprint is also unique to this collection. It seems curious because it was printed in Albany, New York, and no author or source is cited. Yet the Citation includes “Social classes – Juvenile Literature” and “France – History – Louis XIV, 1643-1715--Juvenile Literature.” The protagonist in this tale does not immediately appear to be an object of interest or compassion for the children of the new American republic. Her story begins:

The unfortunate James the second, of England, was obliged to abandon his kingdom, and take refuge in France; where, at the palace of St. Germain, Louis XIV afforded him an asylum. A few loyal subjects followed him in his retreat, and settled at St. Germain, among whom was Madame de Varonne, decended (sic) from one of the best families in Ireland, and whose history I am going to recount.

During the life of her husband this Lady lived in ease and affluence; but after his death being left in a foreign country without protection, she had not sufficient interest at court to obtain any part of the pension on which they had before subsisted. She neglected not, however to, present petitions to the ministers, who always answered, they would lay them before the King; and she continued in suspense for more than two years; till at last, on a renewal of her request, she received a denial, in so formal and positive a style, that she could no longer be blind to the fate that attended her.

The stage is set. The Lady sinks into poverty but is determined to commit herself to God’s mercy. Enter Ambrose her faithful footman.

It is necessary you should know something of Ambrose; I will therefore give you a few traits of his character.

Ambrose was forty years of age and had lived with Madame de Varonne twenty. He could neither read nor write, was naturally blunt, apt to find fault, spoke little, and always appeared to look with contempt on his equals, and with a degree of haughtiness on his master. His sullen deportment, and dissatisfied air made his attendance not very agreeable; but his punctuality, good conduct, and perfect fidelity, had always made him esteemed as a most excellent and valuable servant. His good qualities, however, were only known in part, for he possessed the most sublime virtue; under a rough exterior was concealed an elevated and generous soul.

Just how elevated and generous Ambrose is become evident as the tale unfolds. The Lady is reduced to living in a garret. Ambrose refuses to leave her despite her protestations. He gets employments as a metalworker, obtains the services of a girl to wait on Madame, comes each evening to her abode to hand her his wages, and refuses to look to his own needs. Ambrose becomes ill and his visits cease. Madame goes in search of him and finds him on the edge of death in a dreadful attic. She engages the help of a notable physician. At last, Ambrose begins to heal. Finally, a sort of fairy godmother appears to the Madame and promises her she shall have her pension restored. It is, and she and her faithful servant are situated in a fine house and, essentially, live happily ever after. 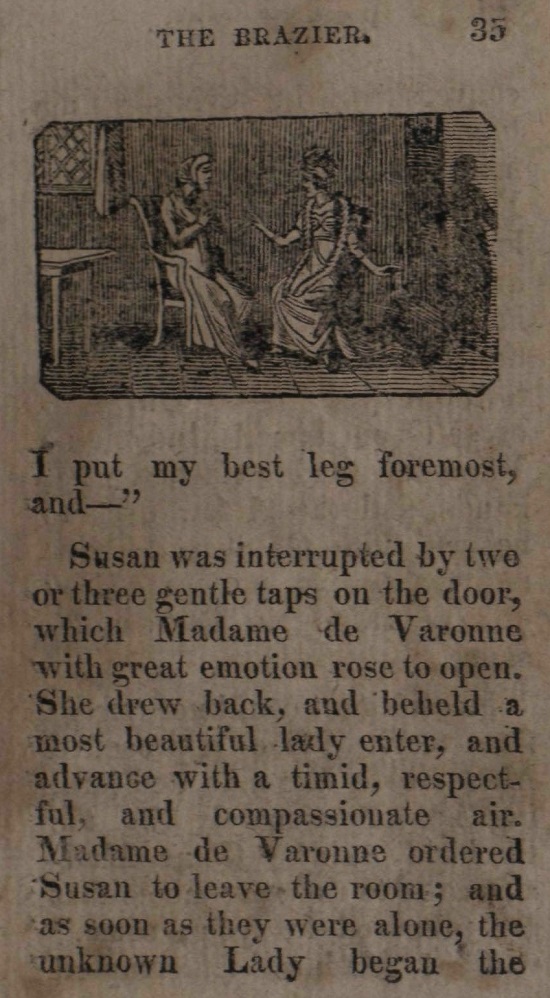 Again, we consider an imprint which is unique. The Citation includes a note stating “Title vignette has caption: Manhood--the autumn of life.”

But winter now is near,

With ice and frozen ground.

The author argues that autumn is manhood made manifest.

Autumn, which resembles manhood, or a state of maturity, comes loaded with the choice fruits of the earth, which are bountifully bestowed by the great Creator of the universe, for the use of man and beast, and for which we ought to be forever thankful.

The trees and forest now change their hue, from a bright and lively green to a golden or yellow colour, and the leaves next descend in numbers from the branches and bestrew the ground: a solemn lesson to mortals, for, as sure as they do, so shall we descend to the earth.

As the author extols the glories of the season, he is careful to provide gentle reproofs to bad behavior. When rejoicing over the excellence of cider “which is a wholesome and palatable liquor” he warns “sometimes it is used too freely.” Again, when describing the playthings of children including marbles and tops he is careful to advise

…they should not transform play, which was designed only for amusement, into any kind of a game, in order to win each other’s play things. It is wrong; for it not only encourages covetousness, but often stirs up anger and strife.

Included in the text is a poem with an interesting perspective on hunting.

When renard, at midnight, steals

down to the farm

And kills the poor chickens

there can be no harm

In chasing a thief of a Fox.

But the innocent hare, and the

‘Twere cruel and wicked to

The partridge with blood never

Nor hare stole the poultry

If folks would but think of the

To creatures who cannot com-

I think they would let the poor

There are a number of illustrations which adorn the imprint. 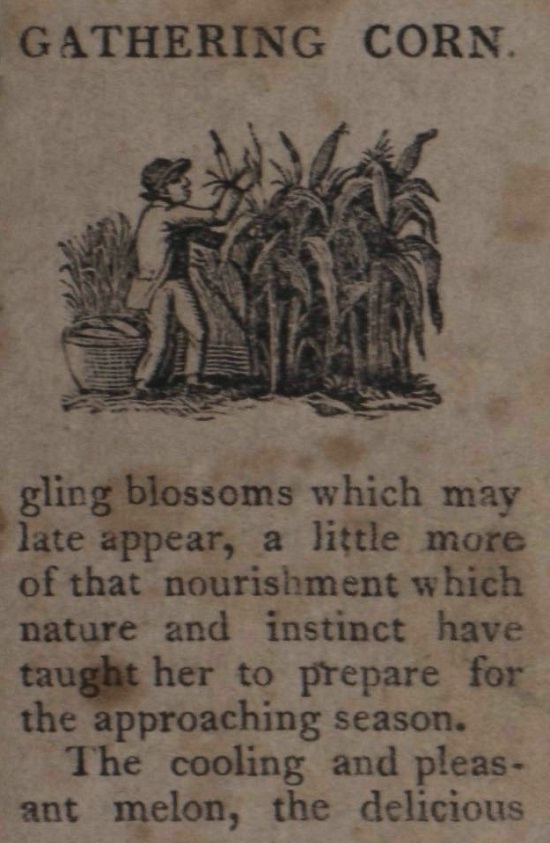 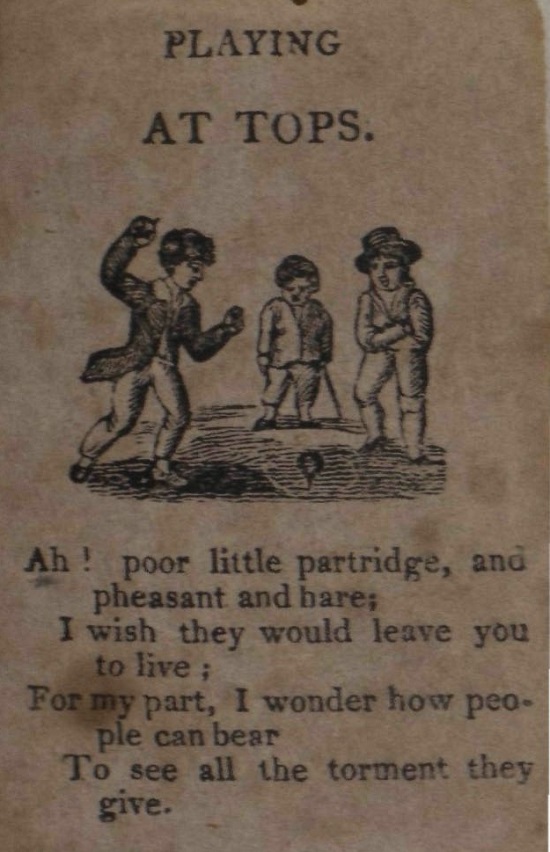