“The Stronghold of Caste and Prejudice”: Highlights from Afro-Americana Imprints, 1535-1922

The June release of Afro-Americana Imprints, 1535-1922: From the Library Company of Philadelphia includes a striking collection of nature illustrations, an optimistic speech on race relations, and a biography of 18th-century scientist Benjamin Banneker. 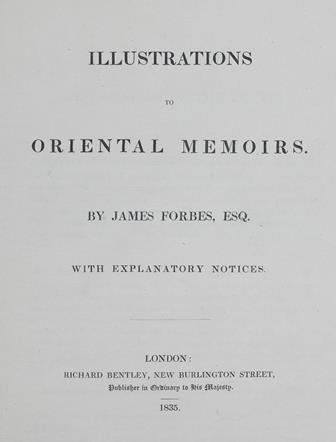 British artist and writer James Forbes traveled to India in 1765 while employed by the British East India Company. After years of extensive travel, Forbes eventually returned to England where he wrote Oriental Memoirs: Selected and Abridged from a Series of Familiar Letters Written during Seventeen Years Residence in India; Including Observations on Parts of Africa and South America, and a Narrative of Occurrences in Four India Voyages. This companion work, Illustrations to Oriental Memoirs, contains many impressive drawings, as seen in these three examples:

The Red, Blue, and White Lotus of Hindostan

These Water Lilies were drawn and coloured from nature: they are particularly described in various parts of the Memoirs, and almost cover the Indian lakes. When gently agitated by the breeze, they give them a beauty and freshness not easily conceived by the inhabitants of a colder climate. 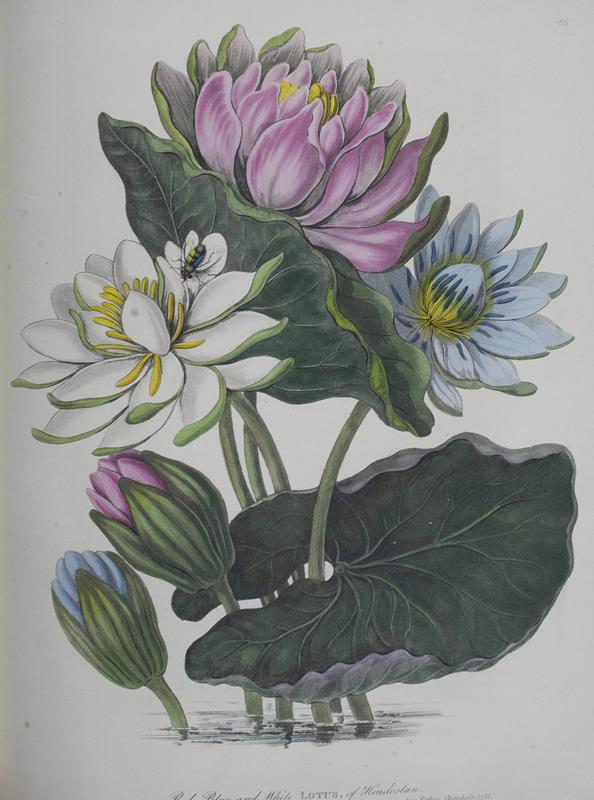 This unfortunate inhabitant of the ocean was drawn of the natural size and colours, from one which alighted on the deck of the ship, in its flight from its watery foes, and pursued by the sea-fowl hovering over the shoal from which it separated. When the oceanic flying fish first emerges from the water, it is of the most beautiful silvery hues, softening the varied shades of purple and blue. 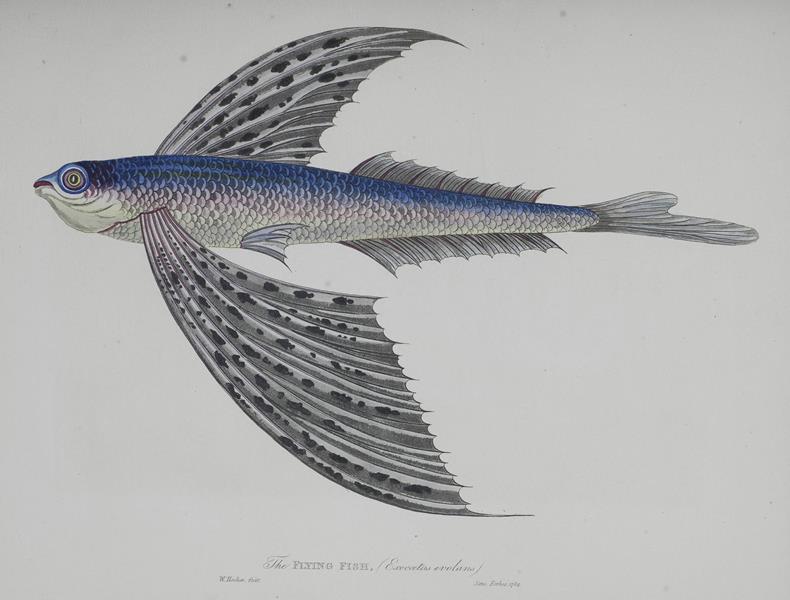 The latter is the usual appellation of this beautiful production of nature, which expands its light transparent sail at pleasure, and with thousands of its comrades scuds before a light breeze, and enlivens the surface of the ocean in the tropical latitudes. 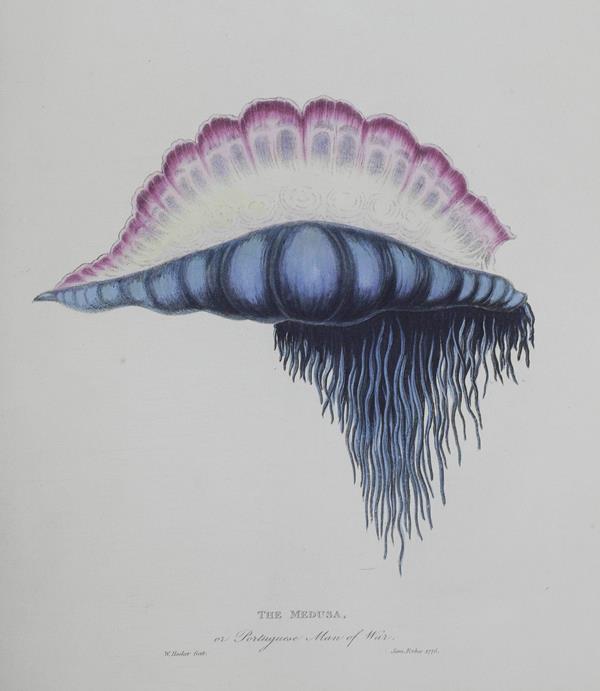 The Negro Problem, As Agitated in This Country (1885) 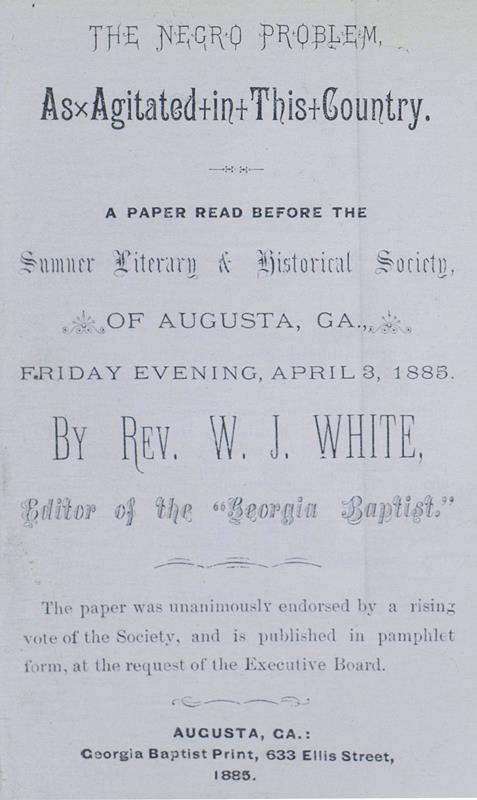 William Jefferson White’s speech before the Sumner Literary & Historical Society of Augusta, Georgia, is impressive for several reasons. White concisely summarizes the history of African enslavement in the American Colonies and United States as well as the African American struggle for personhood, citizenship, and equality. He then turns his attention to future improvement. It is stunning how many of his ideas were prescient at the time, yet remain to some degree unresolved today.

The stronghold of caste and prejudice now confront us. This fortress is to be stormed and her walls leveled to the earth. I do not know that I can give any better name to this fortress than NEGRO PREJUDICE. Mind you, I do not say NEGRO HATRED. Prejudice does not carry with it, of necessity, hatred. Negro prejudice lifts its head in every nook and corner of our land. It is the enemy hardest to be conquered, because it is more deeply seated than all others. Go where you will, North, South, East, West, and to a greater or less extent, this prejudice is found. This, I believe to be the last stigma attaching to us because of our past bondage. The words, Negro and Slave, have for years in this country, been, in the conception of the public mind, so nearly synonymous that to be one, meant the other. To be a negro, was to be a slave; to be a slave, was to be a negro.

White continues hopefully, arguing that after racial prejudice is overcome “…the color of the skin will have nothing whatever to do with our civil political, religious or social status.”

White and colored churches and schools, as such will pass away, and social standing will be fixed by moral, intellectual and financial worth, or family relation. To be white, will be of no social advantage, as at present, and to be black will no longer be a bar to social recognition.

Although White had high expectations for society in general, he expected no less from African Americans:

In business, all avenues of employment should be thrown open to the colored people, to be filled or not, by them upon the score of qualification, and not because of color or previous condition….But after all, the full solution of this problem is in the hands of the colored man himself. He must show his disposition to rise, and them prove his capacity to do so of his own inherent power….Intellectually he must rise to the inventive plane to command full recognition. In the commercial world, he must demonstrate his business capacity by successfully establishing and carrying on business enterprises….Politically, he must exhibit that degree of patriotic manhood that will always bring him to the polls, and at the same time he must rise to that lofty conception of political responsibility, that will forever prevent his being regarded, or used as a mere political tool in the hands of either a party or individuals. 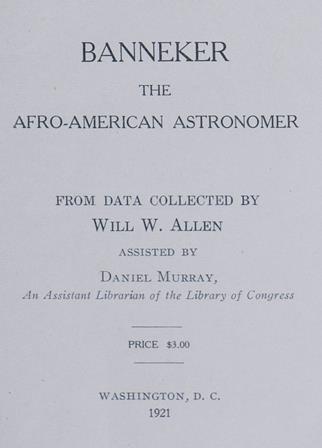 By Will W. Allen

Born in 1731 and largely self-taught, Benjamin Banneker was a free African American who became a scientist, surveyor, almanac author and farmer. He capitalized on his knowledge of astronomy by writing a commercially successful series of almanacs. He sent a copy to Secretary of State Thomas Jefferson who, impressed with the work, responded:

I have taken the liberty of sending your almanac to Monsieur de Condorcet, Secretary of the Academy of Sciences at Paris, and a member of the Philanthropic Society, because I considered it as a document to which your whole color had a right, for their justification against the doubts which have been entertained of them.

A striking aspect of Banneker was his willingness to speak truth to power. In a letter to Jefferson, Banneker compared the plight of the colonists prior to the American Revolution to that of the African Americans held in bondage despite the spirit of the Declaration of Independence. Banneker boldly wrote:

Here, Sir, was a time in which your tender feelings for yourselves engaged you thus to declare; you were then impressed with a proper idea of the just valuation of liberty, and the free possession of those blessings to which you were entitled by nature; but, Sir, how pitiable it is to reflect, that although you were so fully convinced of the benevolence of the Father of mankind, and of his equal and impartial distribution of those rights and privileges which He had conferred upon them, that you should, at the same time, counteract his mercies, in detaining, by fraud and violence, so numerous a part of my brethren, under groaning captivity and oppression; that you should, at the same time, be found guilty of that most criminal act, which you professedly detested in others, with respect to yourselves.