The current release of imprints from the American Antiquarian Society’s American Civil War Collection, 1860-1922, includes strikingly different assessments of the war’s origins as described a half century apart by two very different men. In 1862 the governor of Virginia’s Union sympathetic rump government left no doubt as to where the responsibility for the war lay. By contrast, writing 50 years later a veteran of the Union Army is not nearly so certain as the governor. 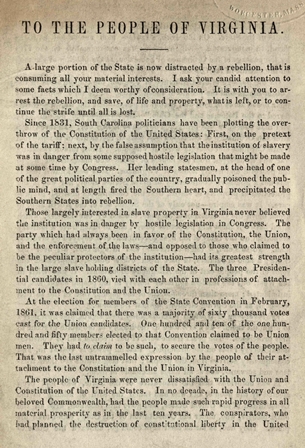 A supporter of Abraham Lincoln, Francis Harrison Pierpont [sometimes Peirpont] was a native Virginian opposed to his state’s secession. When Virginia voted to secede, a number of counties in the northwest refused to go along. They formed an alternative government in Wheeling which they called the “Restored government of Virginia,” sent representatives to the U.S. Congress, and elected Pierpont to be their governor. He was reelected in 1863 and led the successful campaign to establish the new state of West Virginia. In 1862 he wrote and published this letter “To the people of Virginia.”

He opens by stating that “A large portion of the State is now distracted by a rebellion, that is consuming all your material interests.” He challenges his constituents to act to “arrest the rebellion.” He accuses South Carolina of having plotted since 1831 to “overthrow the Constitution of the United States” by one ruse or another. Not specifically naming John C. Calhoun, Pierpont alleges that South Carolina’s “leading statesman… gradually poisoned the public mind, and at length fired the Southern heart, and precipitated the Southern States into rebellion.”

Alleging fraud on the part of the delegates elected to the state convention in February of 1861 who, he claimed, ran as Union supporters only to vote for secession, the governor avers that...

He was just getting warmed up.

Pierpont outlines the history of the Wheeling Convention on June 11, 1861, at which was established the new rump government of Virginia. And then he asks,

What has succession or rebellion brought on the State? Whether farms, houses, or internal improvements, all is one common ruin which lies in the track of the rebel army.

He laments the mourning families of slain soldiers, the “thousands of widows and orphans…houseless and homeless” and the thousands more “reduced to want by their subsistence being taken to feed the rebel army.”

He makes several dire predictions regarding the further destruction of the state and its assets and the possibility of abandoned slaves “suddenly released from bondage and restraint, starving for the necessaries of life…all their savage nature will be aroused, plunder, murder, and every crime will mark their path.” In his conclusion Governor Pierpont promises the vengeance of a just God, the certain punishment for every Virginian who acted in the rebellion’s interest, and that their leaders will “be made to suffer the penalty of their wickedness.” 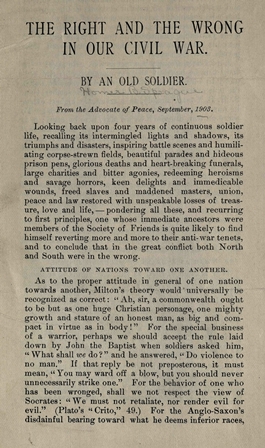 The old soldier, Homer B. Sprague, describes himself as “one whose immediate ancestors were members of the Society of Friends” and as “quite likely to find himself reverting more and more to their anti-war tenets, and to conclude that in the great conflict both North and South were in the wrong.”

Writing this essay at the age of 74, Sprague looks back on his time in the Union Army as “four years of continuous soldier life” as he remembers “its intermingled lights and shadows, its triumphs and disasters….beautiful parades and hideous prison pens, glorious deaths and heart-breaking funerals….redeeming heroisms and savage horrors….freed slaves and maddened masters, union, peace and law restored with unspeakable losses of treasure, love and life…”

Sprague looks to Milton: “Ah, sir, a commonwealth ought to be but as one huge Christian personage, one mighty growth and stature of an honest man, as big and compact in virtue as in body!” and to John the Baptist: “when soldiers asked him, ‘What shall we do?’ and he answered, ‘Do violence to no man.’” He seeks further guidance from Socrates (“We must not retaliate, nor render evil for evil.”), Saint Paul (“God hath made of one blood all nations of men.”), and Jesus Christ “Love your enemies.”).

His musings lead him back and forth as he speculates what each side in the Civil War should have, or might have, done to forestall the conflict or stop it once it began. He reckons that it was never too late for one or both of the combatants to admit error, to back down, but he fails to demonstrate how that might have played out because there seems to be an assumption on his part that if one side acted graciously the other side would  naturally follow suit. He laments that there was no “impartial umpire then. We have one now. The Hague Tribunal ought soon to end both the bloodshed and the blasphemy.” He imagines with this “Supreme Court of the world” that “surely the hasty resort to human slaughter, with its essential savagery and its mocking appeals to Moloch, misnamed God, would soon disappear among people claiming to be above the reptile stage in evolution.”