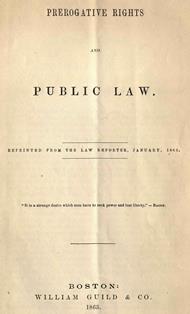 Charles Frederick Blake wrote this work, Prerogative Rights and Public Law, in response to William Whiting’s The War Powers of the President and the Legislative Powers of Congress in Relation to Rebellion, Treason, and Slavery.  Whiting had postulated the U.S. government had full belligerent rights against the inhabitants of seceded states, and without going beyond the Constitution could confiscate their property, emancipate their slaves, and treat them as public enemies. Before countering Whiting’s specific arguments, Blake begins his reply by noting the paradoxes in which both armed rebels fighting for secession and civilians living under secessionist governments found themselves:

The general doctrine, that the government may wield against the rebels sovereign and belligerent rights, admits of no serious doubt. It is equally clear that it is subject to some restrictions. It will not be claimed, for instance, that the government can accept the surrender of a military force, and then subject its members to indictment and trial for treason. It cannot take them as enemies and try them as traitors. And it may well be doubted whether the inhabitants of States whose governments have been usurped by traitors, can be liable criminally for acts done in obedience to the laws imposed upon them by the usurpers.

Blake continued introducing his opposition to Whiting by arguing the federal government is further restricted by the presumption of innocence and the separation of powers as prescribed by the Constitution:

It is a fundamental principle of law that every man is presumed to be innocent until he has been proved guilty; and nothing is more carefully provided for in the constitution than the separation of the legislative and the judicial power. Therefore Congress, in the exercise of its power of legislation, cannot treat the inhabitants of a certain part of the country as guilty of treason; for by its very nature it is incompetent to distinguish between guilt and the innocence of any portion of its constituency. It can indeed learn that the laws of the United States are impeded by combinations of armed men; it can provide laws by which the courts may condemn the guilty; it can furnish means to the Executive for the enforcement of his authority; but it cannot apply the penalties which it creates, nor wield the force which it calls into the field against any class of citizens, and concern them only. Guided by these familiar landmarks, we can now approach the position of Mr. Whiting. 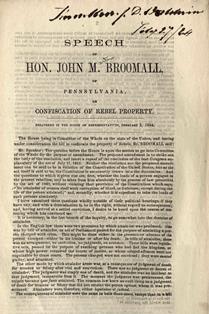 Speech of Hon. John M. Broomall, of Pennsylvania, on Confiscation of Rebel Property (1864)
Delivered in the House of Representatives, February 2, 1864

Representative John M. Broomall, who served in the Union Army prior to his election to the House of Representatives, spoke to another legal paradox. Broomall called the House’s attention to the apparent loophole that allowed the government to take possession of a traitor’s property for only the period of the traitor’s life, after which possession would revert to the offender’s heirs:

The gentleman from Ohio [Mr. Cox] maintains that by the restriction the lands of the offender can only be taken for life as a punishment for the crime of treason…This position is singular. There are other crimes against the United States, besides the crime of treason, running from it down the scale of depravity, to the fraudulent use of postage stamps. A few of these are punished with death, but most of them by fine and imprisonment. To satisfy the fine imposed for some small larceny committed on the high seas, the lands of the offender may be sold from him absolutely; and yet it is gravely urged that for the crime of treason—the highest known to the law—they can only be sold for the life of the offender. The absurdity of this position becomes the more manifest when it is remembered that at the time of the formation of the Constitution there was no punishment known for the crime of treason in any country in the world except that of death.

Broomall noted the government could change the punishment for treason to a lengthy imprisonment, allowing at least a temporary benefit from the forfeited property, but he then returned to the crux of his speech, asking,

Why favor the traitor more than the murderer, the pirate, the forger, the thief? 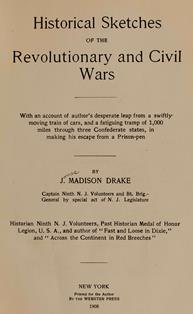 James Madison Drake was a Union soldier who, for his action during the Battle of Port Walthall Junction in Virginia on May 6, 1864, received the Medal of Honor. His citation reads, “Commanded the skirmish line in the advance and held his position all day and during the night.”

Later in life Drake wrote this history of the American Revolution and Civil War. He began with this introduction:

The sketches of the Revolutionary War are founded upon legends I fondly heard when a youth from revolutionary sires and their descendants, as well as from official reports and statements appearing in the newspapers of that period, while those relating to the Civil War furnished by the actors, some of whom are still living, are given that the heroic actions of my comrades may not be effaced by time nor their wondrous deeds deprived of renown.

The modest work is submitted with the fond hope that it may revive proud recollections in the hearts of all true Americans, and inspire them with patriotism and greater love of country, for which its braves sacrificed so much.

What the author has done (in the pages which follow) in chronicling and perpetuating the brilliant history of New Jerseymen he much fears will be but an epitome of what might be recorded, but such as it is he dedicates it to the patriotic people of America.