“You Whine in All the Moods and Tenses”: Highlights from The American Civil War Collection, 1860-1922

The May release of The American Civil War Collection, 1860-1922: From the American Antiquarian Society includes a reply to a Confederate sympathizer’s claims of victimization, a lecture on the effects of the Civil War on national productivity, and a compilation of biographical sketches of Lincoln’s Cabinet officers, now often described as his “team of rivals.” 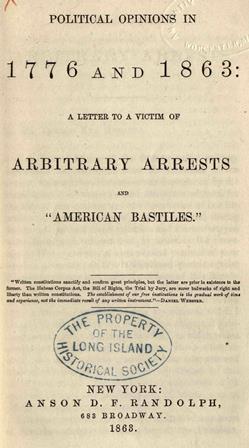 Frank Key Howard, grandson of Francis Scott Key, was an editor of the Baltimore Daily Exchange and a Confederate sympathizer. In 1861, he wrote an editorial criticizing the Lincoln Administration’s suspension of the writ of habeas corpus, declaration of martial law in Baltimore, and arrest and imprisonment without charge of Baltimore’s mayor, police commissions, entire city council, and a sitting U.S. Congressman. In response to his editorial, Howard was himself arrested without warrant and imprisoned for over a year. He was initially confined to Fort McHenry which his famous grandfather had seen withstand a British bombardment during the War of 1812, inspiring him to write The Star Spangled Banner. After his release, Howard wrote Fourteen Months in the American Bastiles based on his experience as a political prisoner.

In this work, an open letter to Frank Key Howard, Sidney Cromwell dissects Howard’s position and offers counterpoints to each of Howard’s arguments. After responding to Howard’s overall legal objections to the Lincoln Administration’s actions, Cromwell turns his attention to Howard’s particular case:

You complain of your sufferings, your lodging, and your fare: you whine in all the moods and tenses, and vex every accessible officer of the Government because you had ‘nothing but the ordinary rations of the soldier, which are of the coarsest kind,’ because ‘the dinners consisted of fat pork and beans, a cup of thin soup and bread, or of boiled beef and potatoes, and bread on alternate days:’ atrocious treatment, indeed, of a man guiltless of any offence whatever except the advocating of certain political opinions—those opinions being, that the cause of the slaveholding rebels, called the South, is a just cause, that the Union is and ought to be dissolved, and that the people of every State have a right to obey or defy the national government at their pleasure….Now do you think the people of this country will weep much because you, who have seen fit to adhere to the public enemy, lived for fourteen months…upon the best fare which the nation can afford to those who are giving up their lives in defence of the country against that public enemy? If so, the best thing you can do is to go across the line, step into the ranks of that enemy, and then perhaps the nation may find means to send you speedily to paradise itself… 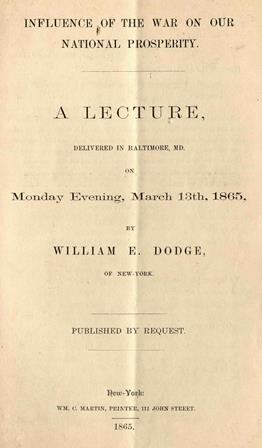 Influence of the War on Our National Prosperity (1865)

New York businessman William Earle Dodge was known as one of the “Merchant Princes” of Wall Street. A founding member of the Young Men’s Christian Association and president of the National Temperance Society from 1865 to 1883, Dodge represented New York’s Eighth Congressional District in the 39th Congress. He viewed slavery as immoral but maintained a laissez faire attitude, preferring to avoid interference with the institution where it existed.

On March 13, 1865, Dodge delivered a lecture on the economic effects of the Civil War on the national economy. Although he prefaced his remarks by saying he was referring only to the Civil War, his remarks resonate 150 years later:

War between two contending nations sometimes brings prosperity to a certain extent, but the work of war is destruction and ruin. When we entered this gigantic struggle, we little knew what it would cost, either of life or of treasure. We were all unused to such a struggle. We knew nothing of the awful proportions to which it would grow; but we have been guided by a kind of gracious Providence, and I love to contemplate the manner in which that Providence has watched over us,—had prepared us to meet this destruction. 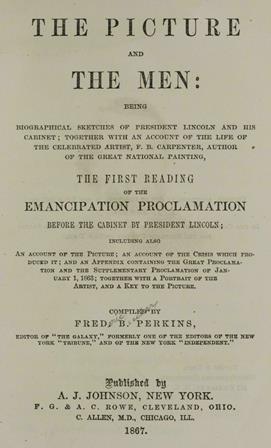 The Picture and the Men: Being Biographical Sketches of President Lincoln and his Cabinet (1867)

Frederic Beecher Perkins served as librarian of the Connecticut Historical Society, and worked at both the Boston Public Library and San Francisco Public Library. In these biographical sketches of President Lincoln and his Cabinet, he includes anecdotes from the early lives of the president and his “team of rivals.”

Describing the young William Henry Seward’s intense thirst for knowledge, Perkins recalls the following account about the future Secretary of State, who...

ran away, not from school, but to it; he was always reading; and when some boys threw stones at him as he was studying while driving the cows home, he was so intent on the book that he merely turned round and walked backward to escape the missiles, still reading away. Coming to a small stream, he missed the bridge, and backed into the water. If an elder brother had not seen him and pulled him out still alive, though unconscious, his career would have ended then and there.