The Back-to-Africa Movement, American Colonization Society, and the Know Somethings

The July release of Afro-Americana Imprints, 1535-1922: From the Library Company of Philadelphia has several items about the American Colonization Society and the movement to return freedman to Africa. Founded in 1816, the American Colonization Society was a coalition between two distinct groups: abolitionist evangelicals and Quakers on one side, and, on the other, slaveholders who saw in the repatriation of freedmen a way to prevent slave rebellions. Beginning in 1821, thousands of freedmen would eventually emigrate from the United States to what would become the Republic of Liberia.

A Sermon, Preached at New-Ark, October 22d, 1823, Before the Synod of New-Jersey, for the Benefit of the African School, under the Care of the Synod. By Samuel Miller, D.D., Professor in the Theological Seminary at Princeton (1823)

Samuel Miller’s sermon captures the sentiments of many abolitionists in the early 19th century. While finding slavery abhorrent, many were unable to view African Americans as their equals. Miller considers African Americans to be morally, intellectually, and spiritually unprepared for immediate emancipation and argues instead for a gradual process, writing,

But the idea of liberating, and turning loose on society, at once, a million and a half of slaves, with all the ignorance and depravity to which their bondage has contributed to reduce them, would surely be the extravagance, or rather the cruelty would be to bring, not merely on the white population, but on the slave themselves, thus suddenly liberated without being prepared for it, an accumulated curse under the name and guise of a blessing.

According to Miller, religious conversion was the most important way to prepare African Americans for their eventual freedom. He continues,

…all hope of essentially meliorating the condition of the Africans, or the descendants of the Africans, in our land, in any other way than by means of the religion of Jesus Christ, is perfectly vain. It is only the power of this blessed religion, that the “oppressed” can really be “made free,” and “every yoke be broken.” If “Christ make any free, they are free indeed. And until He does make them free, their freedom will be only nominal and worthless.”

Like many supporters of the American Colonization Society, Miller felt that returning freedmen to Africa would serve as “the means of introducing civilization and Christianity to the benighted African nations.”

In this publication Thomas Hodgkin attempts to answer the American Colonization Society’s critics who charged that the society was instituted by slaveholders and advocates of slavery. Hodgkin offered a nuanced explanation, writing,

Although it is true, that amongst the founders of this society there were several citizens of the Southern States, some of whom were possessed of slaves, it does not necessarily follow that the design was bad, or that it is to be regarded as strictly the contrivance of slaveholders. The sufferings and degradation of the coloured population of America had, for more than half a century, excited the sympathy and compassion of very many benevolent and virtuous citizens.

Hodgkin also responds to a criticism, levied by his fellow Englishmen, that the society “aims at nothing less than the banishment of the Free People of Colour from the United States,” stating,

…it is [the society’s] aim to remove the Free People of Colour with their own consent. I cannot find, in any of the writing of our opponents, the slightest attempt at proof that the society has, in any instance, violated its principle in this respect. They do not so much as hint at the occurrence of one example of a Coloured individual having been conveyed from America to Africa, under the auspices of the society, against his own wish. 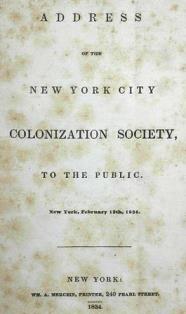 Address of the New York City Colonization Society, to the Public (1834)

The number of managers was unnecessarily large, being forty-five, including the Vice Presidents, who by the old constitution, were, ex-officio, members of the Board. Not more than six or seven of the members usually attended the meetings of the Board to transact the business of the Society. And at one time, one set of managers transacted the business, and at another time, another set. Hence, there was a want of uniformity and consistency in their operations.

The New York City Colonization Society went on to assure the public that their parent society was reorganized with new regulations that “will not only remove the causes of the present embarrassment, but place an effectual safeguard against their recurrence.” 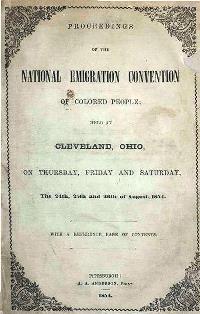 Proceedings of the National Emigration Convention of Colored People (1854)

Many African Americans wished to emigrate on their own terms, without the assistance of the colonization societies. To that end, the Committee on Publication of the National Emigration Convention of Colored People attached several documents to the proceedings of the convention they hoped would be “carefully read and examined.” They expressed their desire that the “great principles herein contained may be disseminated widespread among the people of this country, especially the black and colored inhabitants.”

We earnestly call the especial attention of the reader to the Platform, being the first ever established by the colored people in any Convention in the United States, and necessary as a guide for action; the Constitution of the National Board of Commissioners, the first and only practically useful and comprehensively intelligent organization, unselfish in its motives and designs, ever established in this country among the black inhabitants of the republic; and the Report on the Political Destiny of the Colored Race on this continent, we especially commend to the careful perusal of every black and colored person on the continent – as, without the views therein contained, we must forever be the dupes of, and deluded by the whites, even our most professed anti-Slavery friends, and continually drag out the miserable existence of the merest political sufferance and social degradation and disparagement. 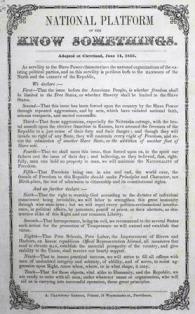 National Platform of the Know Somethings (1855)

Also included in July’s release of Afro-Americana Imprints is the national platform of a little-known political party, the Know Somethings. As a response to the anti-immigrant, anti-Catholic Know Nothing party, the Know Somethings stood for the abolition of slavery, the promotion of temperance and argued that “principles and character, not birth-place, [should be] the test of admission to citizenship and its constitutional rights.” The Know Somethings’ position on religion is particularly interesting in light of the recent Supreme Court case regarding the relationship of religious beliefs and government regulation.

That the right to worship God according to the dictates of individual conscience being inviolable, we will labor to strengthen this great immunity through wise state laws; but we will repel every politico-ecclesiastical interference, in political affairs, by potentate, pontiff or priest, or their abettors, as destructive alike of this right and our common liberty.