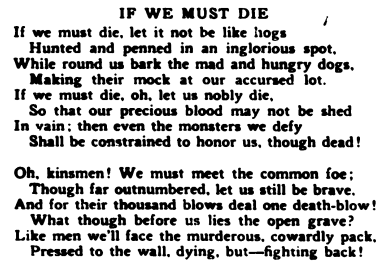 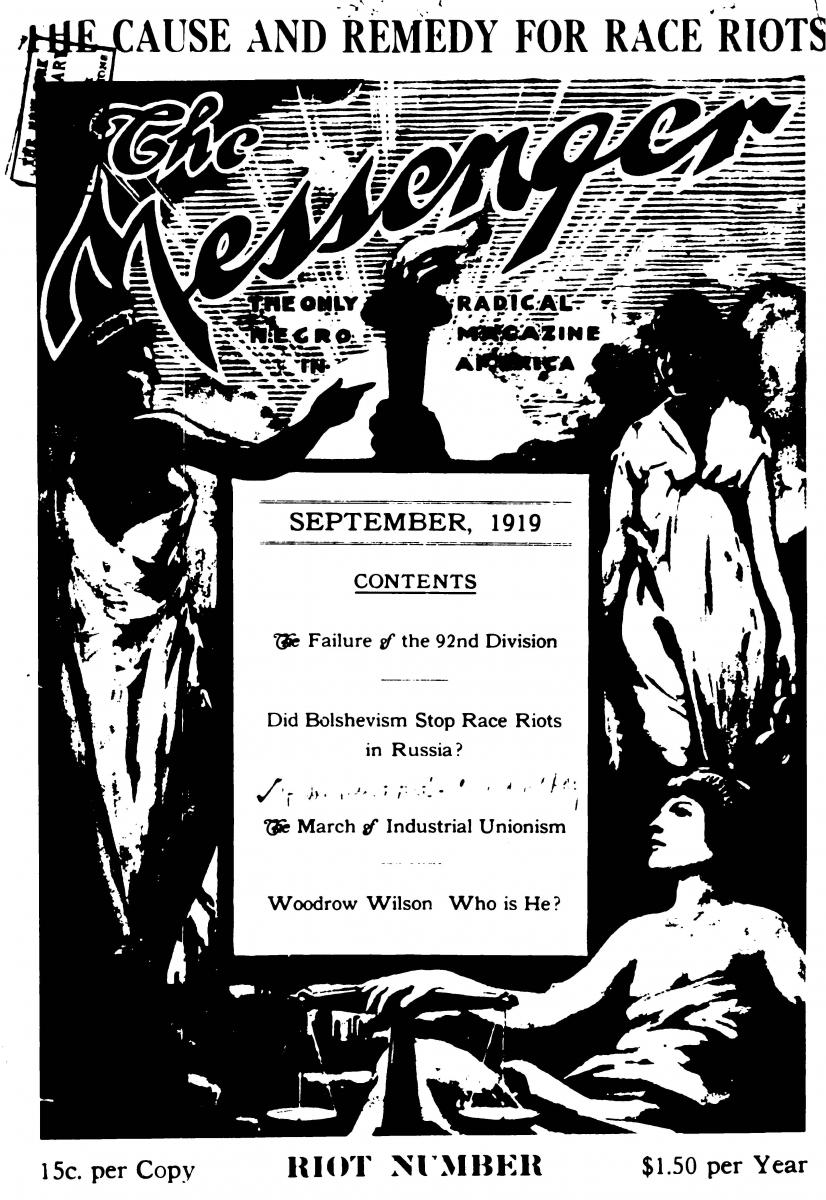 There it accompanies an editorial by William Domingo who asserts that, “The world knows now that the New Negroes are determined to observe the primal law of self-preservation whenever civil laws break down; to assist the authorities to preserve order and prevent themselves and their families from being murdered in cold blood.”

Through his persistent criticism and activism McKay became the subject of an investigation by the precursor of the FBI, so we can also find “If We Must Die” in another journal of American politics, the U.S. Congressional Serial Set, 1817-1994:

It’s no wonder that McKay was viewed as a triple-threat to the status quo in America during those turbulent decades between World War I and World War II. First, he was an educated black man guided by his brother, a teacher, and later by a British mentor who encouraged him to write. McKay also studied at the Tuskegee Institute in Alabama and at Kansas State Agricultural College after he moved to the United States in 1912. But he preferred words to plowshares, and settled in the Harlem neighborhood of New York City in 1914. 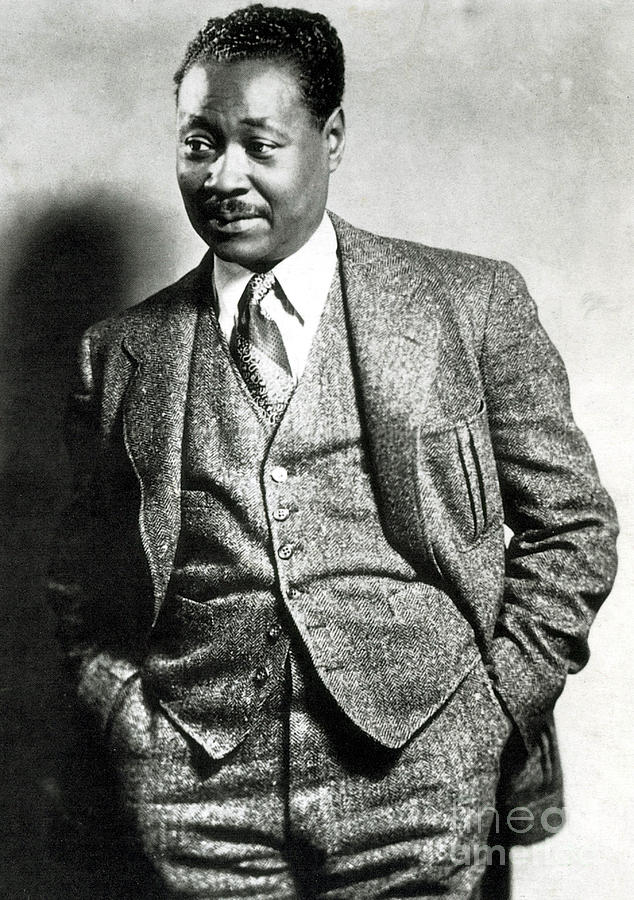 Second, he was unapologetically leftist. Although it was never technically proven that he belonged to the Communist Party, during much of his life he viewed revolution as a necessary means whereby African Americans could gain their civil rights.

Finally, he wasn’t shy about putting his beliefs into words and action. And at that time, for a literate black man inclined to political action and social reform, Harlem was the place to be. The Harlem Renaissance was a social and cultural flowering of African American life from approximately 1918-1930, centered around the Harlem neighborhood in the upper part of Manhattan. McKay fit right in, and in many respects defined that era.

As a writer, McKay was held in high regard both within and beyond the African American community, although some civil rights leaders such as W.E.B. Du Bois were critical of his emphasis on the grittier aspects of the African American life. Here’s McKay in just that mode early in his career writing under the pseudonym “Eli Edwards,” as quoted in The Crisis: A Record of the Darker Races: 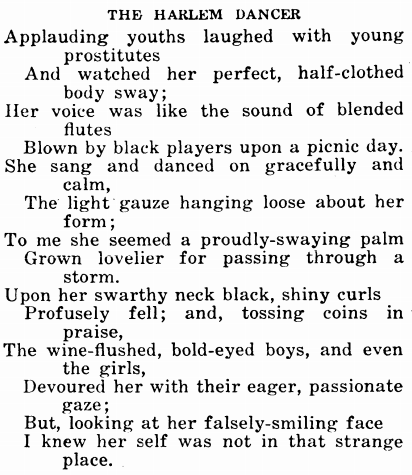 McKay was a colleague of Langston Hughes, with whom his work is often compared. Hughes would himself visit the Soviet Union ten years after McKay’s 1922 pilgrimage to that country, for similar reasons. 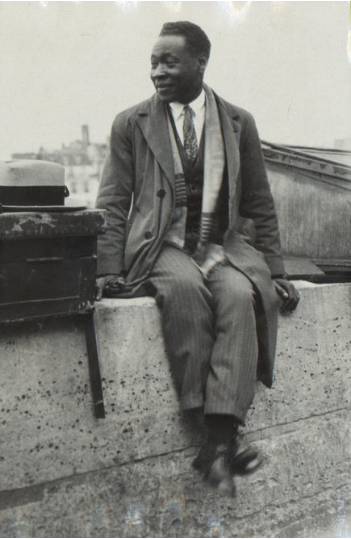 McKay’s most successful book, Home to Harlem (1928), was a paean to the street life and vitality of African American culture in that singular locale. 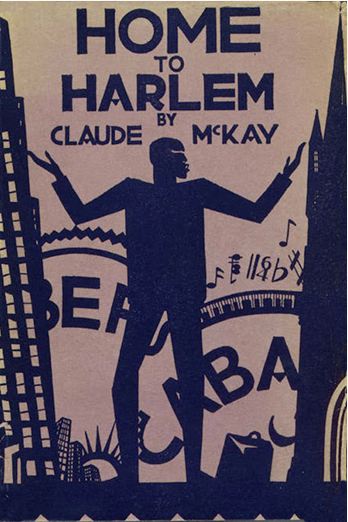 A favorable review from the Washington Evening Star described Home to Harlem in the following words:

The whole effect is that of a moving, shifting mass, brilliantly colored, talkative, melodious in song and laughter, raucous in quick quarrels that smooth easily into friendliness again...

If you don’t like true pictures, maybe you would better move on. If you do like honest artistry, stop here.

As mentioned earlier, McKay was reviewed by Justice Department investigators too; they weren’t nearly so complimentary. In a continuation of the Serial Set report cited above his Bolshevism is on clear display. But notice that while he’s intent on liberating African Americans from the effects of racial prejudice, he also has more than a passing concern for the poor “Cracker” white farmers who suffer nearly as badly under racist policies and beliefs. And he doesn’t mince words in saying so:

Every negro who lays claim to leadership should make a study of Bolshevism and explain its meaning to the colored masses. It is the greatest and most scientific idea afloat in the world to-day that can be easily put into practice by the proletariat to better its material and spiritual life... It might make these United States safe for the negro. When the Cracker slave frees his mind of the nightmare of race equality, when he finds out that his parasite politicians have been fooling him for years, when he takes back the soil from his Bourbon exploiters and is willing to till it alongside of the negro and tries to forget that he is a “nigger,” while the latter ceases to think of him in terms of poor trash...then the artificial hate that breeds lynchings and race riots might suddenly die.

Not only did McKay preach revolution, he witnessed it in action when he travelled to the Soviet Union in November 1922. He had been invited by John Reed to visit Moscow in 1920, but he was not ready for such a high profile political role at that time. By 1922, when Lenin raised racial issues as a national concern of the Soviet Union, McKay decided he needed to be there. 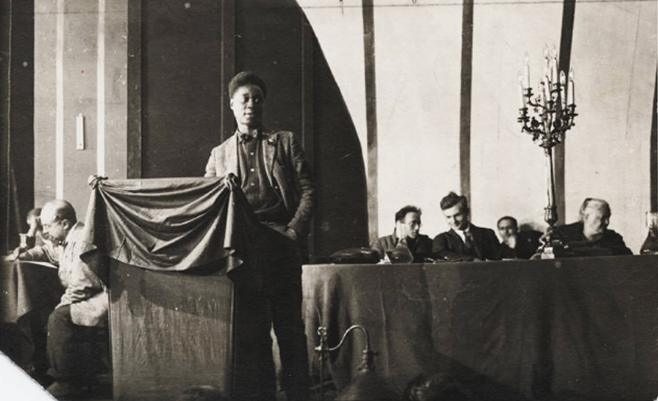 McKay was feted as an honored guest and spoke at the Fourth World Congress of the Third Communist International (Comintern). He would spend seven months in the Soviet Union during which time he met Leon Trotsky and many other notable socialists, travelled extensively, and wrote a book commissioned by the Soviet government. This did not endear him to the U.S. government:

In the second class of nine cases the Attorney General is hereby respectfully requested to investigate the acts of the following persons to determine whether offences against the existence of the government or offenses against federal statutes, have been committed: 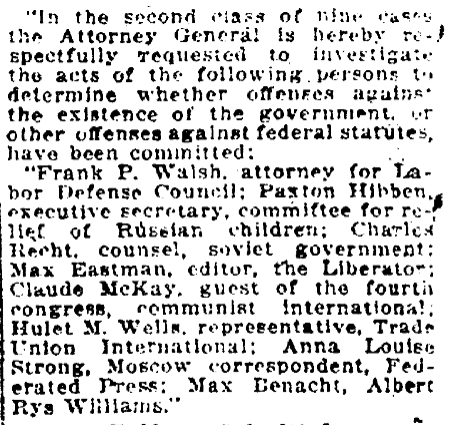 McKay’s political sensibilities were ahead of the curve; it would take American communists six more years to reach consensus on racial matters. In this selection from Joint Publications Research Service (JPRS) Reports, 1957-1994, the racial policy of the Communist Party of the United States is described as progressing in fits and starts:

Throughout his life, McKay’s politics stood in sharp contrast with those of his countryman, Marcus Garvey, founder of the Universal Negro Improvement Association. Garvey’s brand of nationalism called for African Americans to reestablish themselves in Africa, specifically in Liberia, rather than fighting racism in America as McKay chose to do.

McKay was not the only person with misgivings about Garvey’s embrace of extreme segregation. In an editorial from the December 1, 1920, issue of The Messenger, we find the African American community split over the benefits of Garvey’s separatist approach to race relations: 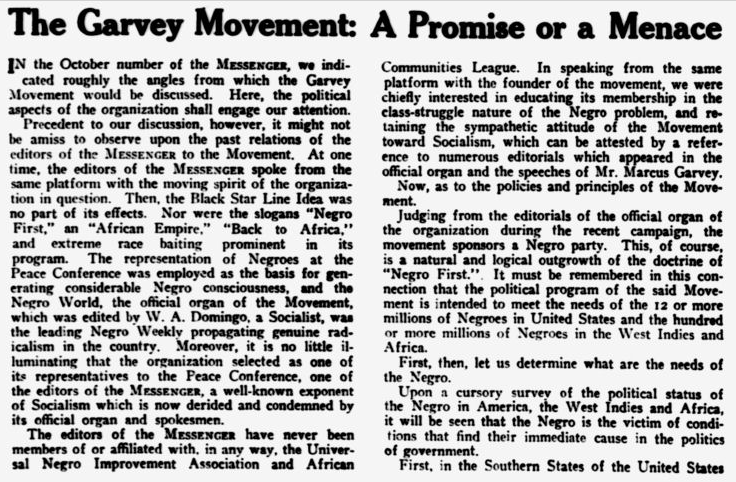 Garvey was sympathetic with socialist ideology but believed that the communists were taking advantage of African American discontent mainly as a means of furthering communism, whereas until late in his life McKay was a firm believer in the benefits of a socialist revolution in America, whatever the motives of its proponents.

In a passage from Foreign Broadcast Information Service (FBIS) Daily Reports, 1941-1996, during his own trip to the Soviet Union Jamaican Prime Minister Michael Manley recalls Garvey’s fraternal feelings for the Soviet people, and McKay’s 1922 visit:

Our recognition of that great event [the Russian Revolution] is expressed in the words of our first national hero, Marcus Garvey, who in 1917 made a statement of profound significance hailing the first socialist revolution and calling on the people of Africa to accomplish the same for their continent as Lenin had accomplished for his motherland.

Six years later, in 1923, our most famous poet Claude McKay arrived in your country. He spent a year here and encountered a most cordial and hospitable attitude on the part of the Soviet people. Luckily, history has preserved for us his impressions of that visit. He wrote: “Never before have I experienced such a genuine sense of sincere liking for any other people, be they white or colored. And I am sure that I will never experience it again. My soul’s response was just as sincere as that mass display of feelings was immediate.”

The Soviets were not alone in using the plight of African Americans to point out the “reactionary” attitudes of white Americans towards racism. The following excerpt from the Chinese political journal Hung-ch’i [Red Flag] shows that the Chinese too had a keen sense of American literary and social history, and were paying close attention to civil rights issues:

The literary works of the American Negroes also ruthlessly exposed incidents in which the reactionary racial exponents freely accused the innocent Negroes of false crimes and used various kinds of legalized torture to put them to death and to massacre the unarmed Negroes. Many Negro authors, such as Langston Hughes in his novels “The Village” and “Father and Son,” and Claude McKay in his poem “Torture,” filled with indignation, thoroughly exposed the various criminal actions of the white racial exponents, who framed, tortured and massacred the innocent Negroes.

In the southern part of the United States, there are various kinds of terrorist organizations which prosecute the Negroes. The most notorious is the Ku Klux Klan. In his book, “The Negroes’ Reconstruction,” Du Bois described the activities of the Ku Klux Klan as, “A group of organized, masked and armed men do what they please after dark in the village. On their way, they whip, shoot, harm and murder women, children and unarmed men, or they may chop off their four limbs. With brutal strength they break into homes where the people are asleep. They use pistols, rifles, knives and ropes to do what they please. 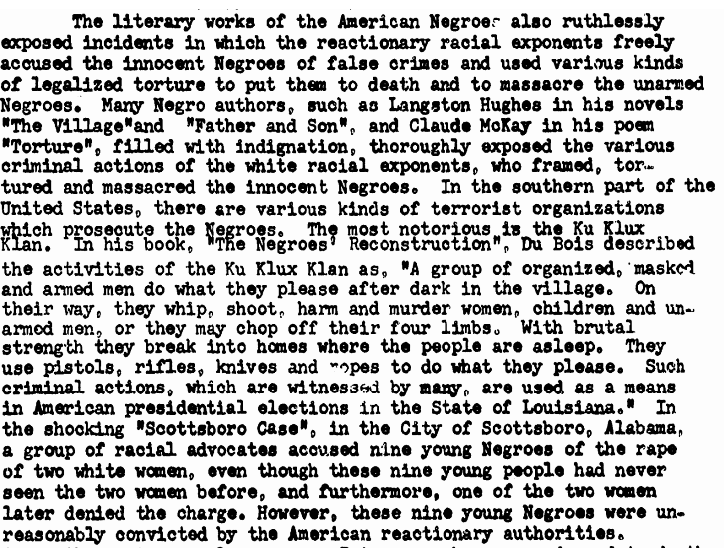 McKay died relatively young in 1948, at age 58. In light of continuing racial tensions in America and as a testament to his talent as a writer, his work remains relevant long after his death. The news item below quotes McKay in tribute to three African Americans slain by highway patrolmen in South Carolina during the Orangeburg Massacre in February 1968.

The Orangeburg Massacre was an incident of racial violence in which three unarmed African American students were killed and twenty-seven others injured at South Carolina State University when Highway Patrol officers opened fire on a crowd protesting segregation. The officers were acquitted of charges of using excessive force. The Orangeburg Massacre predated the better known 1970 Kent State shootings in which four unarmed white students of Kent State University in Ohio were shot while protesting the Vietnam War.

Finally, also in the Washington Evening Star, we have a review of Wayne F. Cooper’s 1973 book The Passion of Claude McKay: Selected Poetry and Prose, 1912-1948 in which Cooper lauds McKay as one of the major architects of the Negro renaissance of the 1920s. Recalling “the old restraints on black writing,” the reviewer notes, “Many a black critic complained acidly that McKay was dragging his race through the mud. But the barriers were broken and stayed broken.” 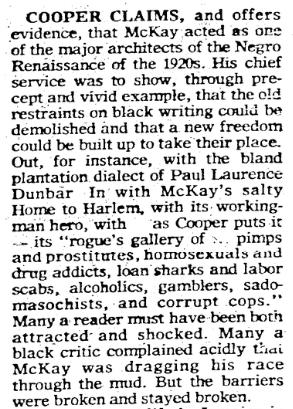 In this brief essay, we’ve focused on McKay’s political activism and social commentary, but we’d be doing him a great injustice if we did not recognize his gift for describing the beauty of the world in addition to his criticism of its rougher edges.

In honor of his stature as a poet, we’ll close with two selections from his verse. The first poem is a veritable hymn in praise of Labor Day, a federal holiday in America since 1894. The second is a slightly abbreviated version of McKay’s “Summer Morn in New Hampshire,” a celebration of life and love. 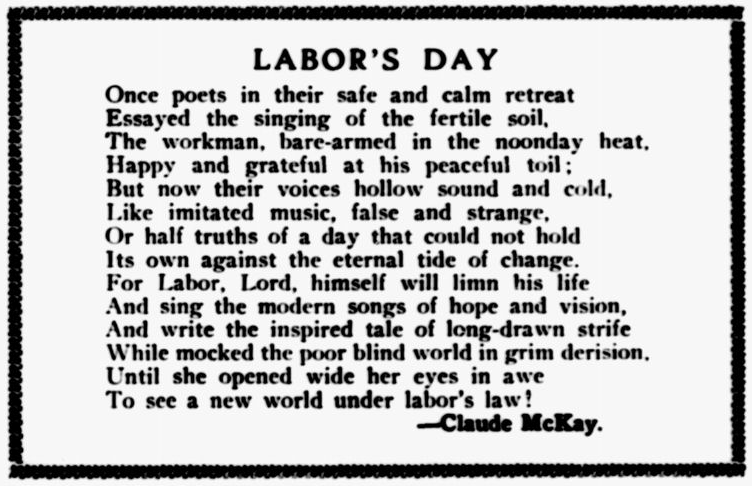 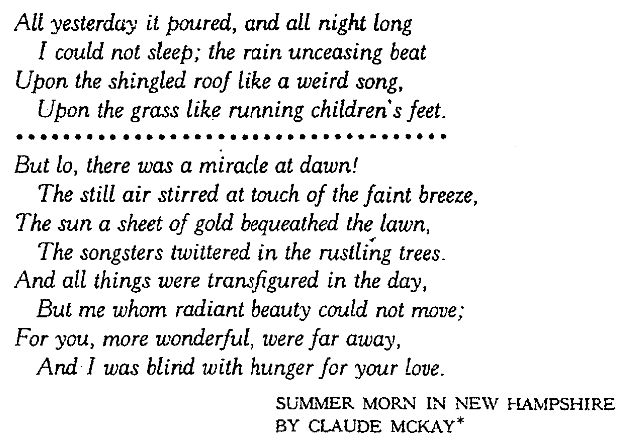