The Father of Brazilian Soccer: Searching for Charles Miller in Latin American Newspapers

As a rising global power, Brazil has received a large share of international news coverage during the past few years. Now with the 2014 FIFA World Cup kicking off this month, the media spotlight has returned to the world’s fifth largest country, a land where soccer is the most popular sport and whose national team has won the most World Cup titles. 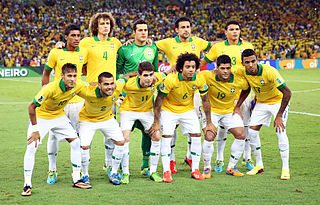 But where does all this football talent come from? How and why did soccer—or futebol as it is known there—become Brazil’s top sport? Although the full story of Brazil’s infatuation with football remains unclear, Miller’s major role in fostering interest is supported by a search of Latin American Newspapers, Series 1 and 2, 1805-1922. 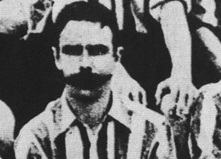 Charles William Miller was born in São Paulo in 1874, son of John Miller, a Scottish railway engineer, and a Brazilian mother of English descent, Carlota Fox. At age ten he was sent to the Banister Court Public School in Southampton, England, to get a better education and where he learned to play cricket and football. A natural at both sports, Miller developed a particular passion for football. He returned to Brazil in 1894, carrying a Football Association rule book, two soccer balls, and lots of excitement. “What have you got there, Charles?” asked his father John when he saw him on the dockside for the first time. “My degree,” Charles replied. “Your son has graduated in football.”

Miller taught soccer to his friends and the game quickly became popular among not only the urban elite but also bands of poor children. Miller helped set up the football team of the São Paulo Athletic Club (SPAC) as well as Brazil’s first football league, Liga Paulista. 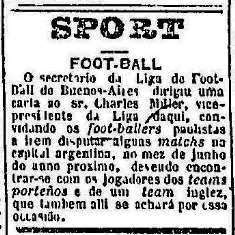 The secretary of the Soccer League of Buenos Aires wrote a letter to Mr. Charles Miller, vice-president of the League from here, inviting the paulistas footballers to play some matches on the argentine capital, in the month of June of next year, meeting porteños players and English players which will be there as well for this occasion.

Don’t want to belittle the competence of Williams, but we cannot forget to distinguish the superiority of Charles Miller, the incomparable footballer, perhaps the best of all that have played the Paulista Championship (natural of São Paulo) and even interstate matches.

And on September 10, the same paper reported: 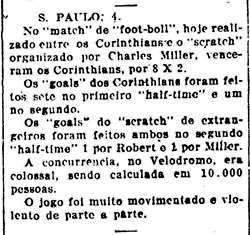 In the soccer match that took place today between Corinthians and the “scratch” organized by Charles Miller, Corinthians won by 8 X2.

Corinthians goals were scored on the first half, and only one on the second.

“Scratch” goals from the foreigners were scored both in the second half of the game, one by Robert and one by Miller. The attendance in the Velodromo was huge, calculated to be 10,000 people.

The game included many passes, and it was a violent match during both half times.

By 1910, less than two decades after Miller’s return to the country of his birth, football had developed into Brazil’s most popular sport.

For more information about Latin American Newspapers, Series I and II, or to request a trial for your institution, please contact readexmarketing@readex.com.