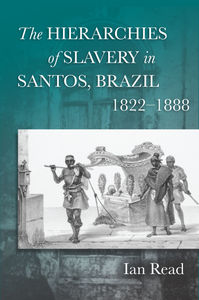 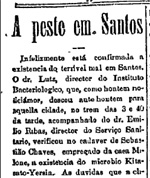 This was Brazil’s first recorded outbreak of plague, but it was only one of a chain of epidemics that had occurred since 1894 when plague had escaped from its natural reservoirs among rodents in the Himalayas. The Yersinias pestis pathogen spread eastward, facilitated by busy colonial networks and the quickening pace of globalization. For the next 50 years it struck various port cities and coastal areas of nearly every continent. When the third bubonic plague pandemic crossed the Atlantic to reach South America in 1899, its victims suffered no differently than elsewhere. In its first stages, the infected developed painful and swollen lymph glands, fever and aches. As bacteria overwhelmed the immune system, fever turned to shock, organ failure and, for about 50 percent of those who contracted the disease, death. Not only did the third pandemic spread plague among humans throughout the world, it also introduced the Yersinias pestis to other species of rodents on multiple continents, where the bacteria persist today in these relatively new natural reservoirs. Bubonic plague has long been a fearsome disease, and is described as such in biblical writings. This was its first appearance in a deeply Catholic country, where many more people understood its propagation divinely rather than pathogenically. Yet why did Santos residents react with nonchalance? First, plague in this locality, or any other for that matter, cannot be understood without the larger epidemiological context. By the end of the nineteenth century, Santos had developed an international reputation as a dirty and dangerous place due to its unshakable pestilence. American mariners called Santos the “cemetery to the world.” For John Masefield, the English poet, “it’s a cruel port is Santos, and a hungry land.” Of biggest blame was yellow fever, a virus that had seen very little place in Brazil before 1849, but developed as fierce epidemics with nearly annual appearances in the 1850s, 1870s and 1890s. So many foreign mariners died, in fact, that even when the city built a large new cemetery in 1854, bones had to be dug up and the holes filled with fresh corpses less than every two years. After decades of attempts to eliminate “effluvia,” drain swamps and initiate sweeping public health reforms, many Santistas saw epidemics as an intractable part of their daily life and town character. The second reason why Santos residents reacted so coolly was that many did not think it would become a serious problem. Literate Brazilians had tracked the disease through newspaper reports from its first Asian outbreaks in 1894 to its movement to the Middle East and Europe in 1899. Early epidemics, such as those in Hong Kong and Bombay, prompted concern because of high death tolls. But these were distant lands, with little connection to South America. Furthermore, few believed it could spread beyond Asia. They were proven wrong, of course, as the disease leapt continents over the next five years. Geographically it broadened in scope, but in virulence it appeared to diminish. Brazilian newspapers reported that after its arrival to Egypt and Portugal bubonic plague did not develop into frightening proportions. These reports also lent confidence to exciting new developments in bacteriology that allowed doctors to identify Yersinias pestis in a microscope. Additionally, the millenniums-old mystery on why swarms of dead rats foretold outbreaks of plague was explained by a communicable germ. In 1895, Alexandre Yersin at the Pasteur Institute in France developed the first anti-plague serum, but Brazilian newspapers of the day spent more time discussing how local health authorities could acquire or manufacture the serum than how trials of Yersin’s serum in Canton and Bombay had largely failed. In sum, it was a combination of fatalism among some, and overconfidence in medicine’s ability to limit the epidemic’s effects among others that allowed the town to largely escape panic when a new deadly disease knocked on its backdoor. Nonchalance was not shared nationally, nor did it diminish a serious public health reaction. Soon after, federal and state governments created institutions that eventually acquired world renown, such as the Butantan and Oswaldo Cruz Institutes. These organizations helped fight plague, which took root and slowly persisted in Brazil, but never became epidemic. Finally, bubonic plague arrived at the end of a five-decade period of unusual epidemiological activity that had profound, yet still unknown, consequences on the country’s society and economy. In the detailed account of the outbreak of plague in Santos, or the larger story of the changing epidemiological environment and its consequences in Brazil, there are new digital history tools at our disposal, including Latin American Newspapers, 1805-1922. In the last decade historians have witnessed a revolution in digitizing and OCR technology. This has allowed millions of pages of old newspapers to be digitized, converted to machine readable text, placed within database programs and made accessible on the Internet. As a result, the proverbial needle in the haystack can be now found by typing “needle” into a search bar. In many respects these tools are still too new to have all their problems solved. Digitized newspaper quality is sometimes subpar, humans still do much better than OCR programs in deciphering low quality text, and the website interfaces that direct searches to information can be cumbersome or slow. Despite these limitations, these new tools give historians much more power in separating the informational wheat from what was previously an overwhelming amount of chaff. For more information on this research, please visit http://eraofepidemics.squarespace.com/

About the Author
Ian Olivo Read, Ph.D., is Assistant Professor of Latin American Studies at Soka University of America, in southern Orange County, California. Read previously taught at Stanford University, University of Puget Sound and the University of California, Berkeley. He has written on the history of the United Fruit Company, elite networks in Brazil and Mexico, and the health and medical treatment of Brazilian slaves. His new book, The Hierarchies of Slavery in Santos, Brazil, 1822-1888, was published by Stanford University Press on January 25, 2012. Linda Lewin, University of California, Berkeley, says Read’s book “offers the most comprehensive view of a discrete, urban Brazilian slave population yet to be produced and is a very important contribution to the history of slavery, not only in Brazil but also in comparative perspective.” The article above first appeared in the April 2011 issue of The Readex Report. Sources Myron J. Echenberg, “Pestis Redux: The Initial Years of the Third Bubonic Plague Pandemic, 1894-1901,” Journal of World History, Vol. 13, No. 2, Fall 2002, 429-449; Myron J. Echenberg, Plague Ports: The Global Urban Impact of Bubon Plague, 1894-1901, New York: New York University Press, 2007; Jornal do Commercio¸ (Rio de Janeiro), 1894-99; O Estado do São Paulo (São Paulo), 1894-99; and Brazilian Review (Rio de Janeiro), 1899.