Historical Newspapers in the Classroom, a Controversial American Master, and a Founding Father’s Political Education: The Readex Report (Nov. 2016)

In this issue: using yesteryear’s advertisements to inspire contemporary classroom research; a compelling profile of a portrait-painting virtuoso; inferring the political intentions of a prominent Founding Father. 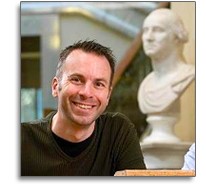 In January 2016 I launched the Adverts 250 Project, a daily blog that features an advertisement published 250 years ago along with analysis and historical context.  This project grew out of my current research, a book tentatively titled Advertising in Early America: Marketing Media and Messages in the Eighteenth Century. Publishing a blog as a supplement to the book offers several advantages, including the ability to share more of my work more frequently and to broader audiences. It also opened up new opportunities for integrating my research into the undergraduate classroom, enriching both my scholarship and my teaching. > Full Story

Born on January 12, 1856, in Florence, Italy, to American parents, John Singer Sargent—one of the most important portrait painters of his time—lived all his life in Europe, including Italy, France, Germany, Switzerland, and Great Britain. He did not touch U.S. soil until 1876 when he was 20. However, his U.S. citizenship and his ancestral roots in New England were sufficient enough for historians to classify him as a prominent American artist. More importantly, Sargent himself considered it an honor to be American; he remained an American citizen all his life, although he chose to live in Great Britain from 1884 until his death in 1925. In 1912 American newspapers reported that he would have received the British Order of Merit had he become a British subject. > Full Story

As an older man writing his life’s story, Benjamin Franklin bemoaned that, in his youth, when he’d “had such a Thirst for Knowledge, more proper Books had not fallen in my Way."[1] The books on his family’s shelves were mostly in “polemic Divinity,” he said, and as we know from how his life played out, Franklin’s inclinations tended more toward physics than metaphysics. To make up for the absence of useful reading in his own home, Franklin borrowed books, read widely, and famously practiced writing based on articles in the news journal, The Spectator. At merely thirteen years old, Franklin entered the printing world himself in his brother’s printshop. > Full Story

Subscribe today to receive the next quarterly issue of The Readex Report in your inbox. Browse previous issues in our archive. If you would like to suggest or contribute an original article, please email The Readex Report editor.