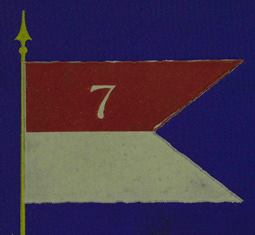 The current release of imprints from The American Civil War Collection, 1860-1922: From the American Antiquarian Society includes a number of histories of Union regiments each written many years after the end of the war by amateur historians. In each instance, the author describes the challenging task in his preface and admits to his perceived shortcomings. We can see that these various accounts deviate from any established norm. And yet, each is similar in its description of the general experience of so many young men, even boys, whose lives were upended by the war and, in many instances, forever changed. 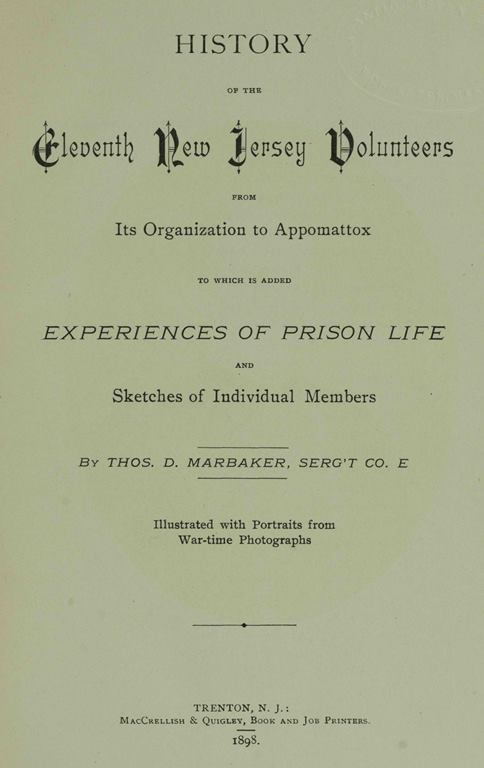 History of the Eleventh New Jersey Volunteers: From its Organization to Appomattox; to which is Added Experiences of Prison life and Sketches of Individual Members (1898)

Thomas D. Marbaker describes his process of determining how best to write the history of the Eleventh New Jersey Volunteers:

When I began the compilation of this work, it was with the intention of making it (principally) a record of persona[l] incidents—those happenings, grave and gay, which gave zest and variety to a soldier’s life and brought out the individual characteristics of the members of the regiment. Upon stating my intention (or rather hopes) to the comrades, it was predicted that there would be such a plethora of material that I would not know what to do with it. Unfortunately the reverse has been the case….It is a strange fact that when comrades get together they can relate incident after incident, but ask them to put their recollections upon paper, then their army life seems to have been a blank…

Marbaker does include personal memories and does not pull his punches:

No one who was with the regiment in its earliest stage, before the officers had reported to their commands, will have forgotten the self-important, tyrannical Sergeant Nolan, of Company F, who seemed for a time to have chief charge of the camp, under Major Halstead. How he strutted around, with his belt strung full of hand-cuffs, and what evident pleasure he felt when an excuse offered to punish some ignorant offender or helplessly drunken soldier! But the old saying, that a “tyrant is generally a coward,” held good in that case, for the “noble” sergeant deserted the regiment on its way to the front, and perhaps it was well (for himself) that he did so.

He further describes the thieveries and cheats that the recruits endured. Liquor was discouraged but smuggled in nevertheless “with the result that some poor slave of appetite would find his way to the guard-house.”

The camp was frequently visited by agents for bullet-proof vests, which articles were at first looked upon with considerable favor. A few of the men purchased, and thought they had secured a protection against the bullets of the enemy. Some of the shrewder ones suggested a practical test, to which an agent, either ignorant of the quality of his goods or strong in his belief of their invulnerability, consented. The vests were taken to the sand-bank, at the eastern end of the camp, and stood against the bank. A few well-directed shots proved their uselessness. They were thoroughly riddled, and the agent, completely crest-fallen, quietly disappeared.

The recruits were ill-prepared for what lay ahead, but constant drilling began to shape them into soldiers. They were young.

Two thirds of those composing the regiment had not reached the age of twenty-one, and many were under seventeen—in fact so many were youths that it was called a regiment of boys—and many people laughed at the idea of such troops doing efficient service. They did not stop to think that the spirit that prompted those boys to leave the love and comfort of home would sustain them through the weariness of the march and the dangers of the battle better than the brawn and muscle of their older comrades. It was a regiment of boys until Fredericksburg and Chancellorsville made it a regiment of men. After the desperate fighting at Chancellorsville there was no more sneering at the youthful personnel of the Eleventh.

Marbaker describes the years of battle, the awful losses and tribulations that were suffered by the brigade. He concludes his history with a chapter entitled Sketches wherein he gives biographical accounts of some of the heroes who fought and served with distinction. Not all who served were combatants.

Chaplain E.C. Cline was born in Warren county, New Jersey. He graduated at Lafayette College in 1857 and at Princeton Theological Seminary in 1862, and was ordained for the army July 6, 1863, entering at once the service of the Christian Commission. From this duty he was called to the Chaplaincy of the Eleventh New Jersey. He was mustered into the regiment September 11th, 1863, and was constantly on duty from that time until the close of the war, when he was mustered out with the regiment, June 6th, 1865.

The position of Chaplain was one of great responsibility. Not only was it his office to preach and to pray—he was the soldier’s counselor. When sickness came his duties found him at the bedside in camp and hospital; on the long and weary march he gave them cheer and sometimes bore their burdens; with tireless hand and sleepless eye he assisted in the care of the wounded and was their support in the hour of death; he wrote letters for the living and looked after the burial of the dead, and communicated the sad news to their friends. 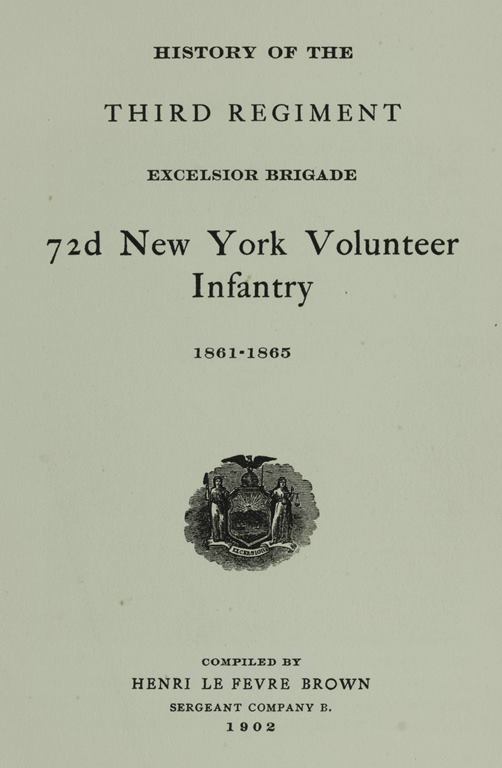 Brown acknowledges the daunting task of doing justice to all in accounting for the endeavors of any regiment or brigade.

There can be no question that many officers and men not mentioned in this history by name, were equally worthy, and perhaps more worthy of notice than those whose names and deeds are here given. In view of the impossibility of doing exact justice to all, the rule has been followed to make honorable mention only of those already named in official records.

He further cites the difficulty of relying on other records to accurately recount a thorough history of any regiment.

All regimental papers have been examined in detail. The personal diary of the compiler has been compared with that of the chaplain for all movements since January 1, 1863, and differences have been reconciled to the satisfaction of both. One record frequently supplied what the other lacked. In cases of doubt on any point, other members of the regiment and of other regiments, have been freely consulted in an honest endeavor to learn and to tell the exact facts.

The author commences with the organization of the brigade in the first chapter.

On May 3rd, 1861, President Lincoln issued his first proclamation calling for volunteers to serve three years.

The Excelsior Brigade was organized under this call as United States Volunteers, at Camp Scott, Staten Island, by Daniel E. Sickles under special authority of the President, dated May 18th, 1861.

In the fall of 1861 when the Government began calling on the loyal states for their quota of troops New York State claimed the Excelsior Brigade, it having been organized within the state.

Brown elucidates the early days of the brigade’s formation.

The companies of the Regiment began to assemble at Camp Scott the latter part of May, and most of the men took their first lessons in camp life, at the same time growling about army rations. They soon settled down to business, however, and then began the never- ending drill, fatigue and guard duty. Although the complaints were deep and lasting regarding drill, no attention was paid to them by those in authority; the drill was kept up, and as the men became hardened the hours were lengthened until it seemed as though it was company drill, battalion drill, dress parade, or inspection all the time. It was hard work for all, but it was this same hard work that made the regiment a unit, and enabled it to perform the various movements and changes with the clock-like precision and steadiness for which it became celebrated.

The daily schedule outlines the demands on the recruits: 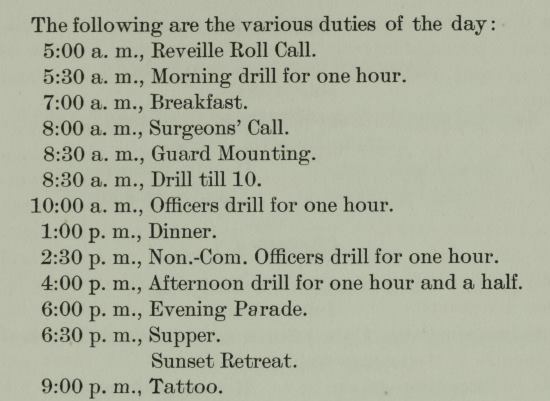 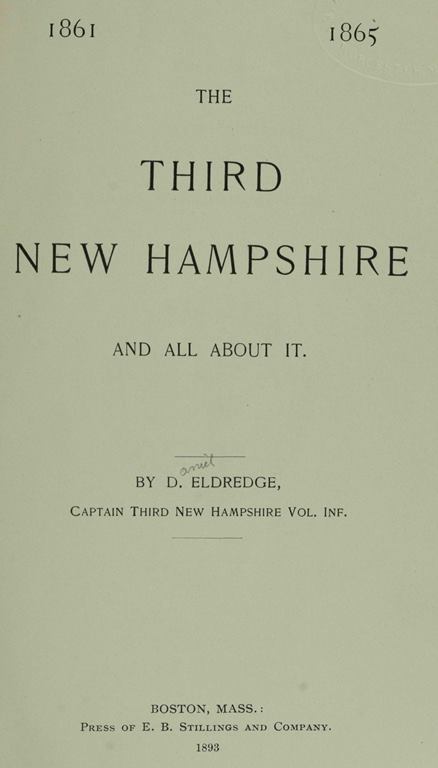 The Third New Hampshire and All About It (1893)

In his preface, Eldredge raises the familiar question: Who can rightfully presume to write the history?

The Third New Hampshire! Who shall write its history? Who shall truthfully depict its battles and bivouacs? Who shall faithfully describe its marches and camps? Who shall relate, in language bold, its experiences and vicissitudes? Who shall correctly state all its changes of station, of numbers? Who will have the courage and assiduity to collect and collate all the multitudinous data? And who will write the book which shall carry to posterity all that need be known of the Third New Hampshire?

Having reluctantly agreed to tackle the account of the Third New Hampshire, the author prepares by reading other such accounts which challenge him with further questions.

A later question arose, as to what style the history should be written in. Several regimental histories were examined, to assist in arriving at a proper conclusion; but the more these were examined, the farther away I was from the desired point. No two pursued the same course. Shall I try to be sarcastic? Shall I try to be humorous? Shall I criticise my superior officers? Shall I caustically arraign every officer who lost a battle? Shall I state the fact if any officer or man was court-martialed? If any behaved unseemly in the face of the enemy, shall it be mentioned? If any officer by stealth and craft raised his rank faster than the regulation speed, shall it be mentioned? Shall the book be embellished with pictures of battles, of forts, of places? Shall the faces of the officers, and none others, be seen in this book?

Not unlike so many similar accounts, this history considers the mundane and the sublime in limning the experiences of so many young men caught up in the great tragedy of civil war. The youth of New Hampshire were not that different than those of Ohio or Indiana, nor, perhaps from those of South Carolina or Georgia. They had not belonged to a standing army. They were not trained to fight. They were often barely men. Rather, many were still boys and likely could not imagine what lay ahead. The value of these arduously wrought accounts of regiments and battalions lies as much in the quotidian experiences and these descriptions of them as it does in tracing the military history of America’s great rebellion.