If At First You Do Not Succeed: Walt Disney Introduces Mickey Mouse (May 15, 1928)

If At First You Do Not Succeed: Walt Disney Introduces Mickey Mouse (May 15, 1928)

0 comments
To say that iconic brands are prevalent in today’s society is a bit of an understatement. Everywhere you look, there’s a sign for a name brand, a store, a large company. It may be hard to imagine a time when this wasn’t the case—when not only was that big name unknown, but it was rejected. Take Disney for example: Can you think of a time when Mickey Mouse wasn’t an icon for family fun? If you’ve grown up in the United States within the last, say, 70 years or so, chances are that you may have seen this mouse a time or two! Looking back at those early years though, Walt Disney didn’t always find success. In fact, in the late 1920s the combination of Mickey Mouse and Disney was a gamble that few were willing to take. 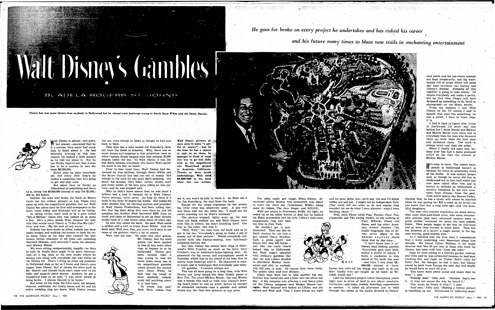 At the time when silent films were coming to an end, and talking pictures were poised to become the newest thing, even Mr. Disney couldn’t successfully peddle Mickey’s debut film: "Plane Crazy." Most theater owners had no interest in this silent, unfamiliar mouse, believing that Felix the Cat, already a hit cartoon, was more than enough to satisfy their theatergoers. Poor Mickey’s introduction to the screen on May 15, 1928 is usually forgotten. Instead, popular history—and even the Walt Disney Company itself—looks ahead to October of that year when "Steamboat Willie," Mickey’s third film, and his first with sound, debuted. Today, Mickey’s first two films are still largely forgotten, even after their re-release with an added soundtrack. For Walt Disney, that third try was the charm. Thanks to Disney’s willingness to take a risk, invest in new technology and simply work hard, Mickey was now on his way to fame. But, still, Walt Disney would struggle for years—in debt and often worried about where the money for his latest, and greatest, venture would come from. Luckily for today’s entertainment industry (and families everywhere), he would persevere, through good times and bad. As he told an interviewer in the mid-1950s: "Everyone can make their dreams come true…. It takes faith and work. A dream—faith in it—hard work."
Tags
Filed under