Among the 100+ works in last month's release of Afro-Americana Imprints, 1535-1922: From the Library Company of Philadelphia are an antebellum account of Caribbean travel written by a New Yorker, slave narratives written before and after the American Civil War, and satirical works on U.S. history by 19th-century English humorists and cartoonists.

As appealing as wintering in the Caribbean may sound, James Smith’s description of his voyage to the Danish colonies illustrates many of the harsh realities of the period. Sailing south of St. Bartholomew’s and Saba, Smith reports, 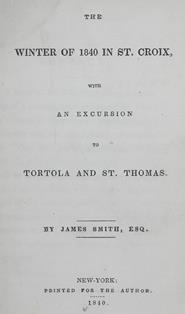 Towards evening…we hove in sight of a brig, which, after viewing attentively, our people considered to be of a very suspicious character. Some apprehensions were entertained that she might be a pirate; and I observed more or less anxiety upon the countenances of the captain and some of our West India passengers. This state of things continued for an hour to two, when, on a nearer view, she was determined to be what the captain called a black bird, or slaver, bound undoubtedly to Porto Rico, with slaves from Africa. We came within a half a mile of this ship, when we distinctly saw her wind sails, and could count between sixty and eighty men on deck, who were supposed to be the fighting men of the crew. It was now after sun-set, and the slaves were undoubtedly shut up in the hold of the vessel. During the day, these slave-ships bring their prisoners on deck, oil their limbs, and make them dance. We were not yet quite relieved from our apprehensions, for we feared that if the slaver wanted water or provisions, she would, without ceremony, and without compensation take them from us. We therefore passed her in great silence, and were glad that she discovered no disposition to intermeddle with us.

James Williams’ early life is a story of betrayal, cruelty, and violence. It begins: 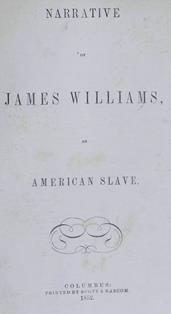 I was born in Powhattan county, Virginia, on the plantation of George Larrimore, Sen., at a place called Mt. Pleasant, on the 16th of May, 1805. My father was the slave of an orphan family whose name I have forgotten, and was under the care of a Mr. Brooks, guardian of the family. He was a native of Africa, and was brought over when a mere child with his mother. My mother was the slave of George Larrimore, Sen. She was nearly white, and is well known to have been the daughter of Mr. Larrimore himself.

Upon the death of George Larrimore, Sr., Williams became the property of his childhood playmate, George Larrimore, Jr., who quickly misled Williams, a house slave. Told the Larrimore family was relocating to Alabama, Williams thought he was sent with his master ahead of the family to help prepare for the move. Instead he was left in Alabama to be the slave driver for the new Larrimore Alabama plantation. Williams wrote:

I stood silent and horror-struck. Could it be that the man whom I had served faithfully from our mutual boyhood, whose slightest wish had been my law, to serve whom I would have laid down my life, while I had confidence in his integrity—could it be that he had so cruelly and wickedly deceived me?

As slave driver, Williams was forced to whip men and women and to track runaway slaves with bloodhounds. Williams wrote of the plight of one re-captured runaway:

He was then whipped and placed in the stocks, where he was kept three days. On the third morning as I passed the stocks, I stopped to look at him. His head hung down over the chain which supported his neck. I spoke, but he did not answer. He was dead in the stocks!

Later, accused of lessening the punishments he is ordered to administer, Williams was himself ordered to be whipped. Facing 250 lashes, he escaped the plantation and fled to the North where he was able to tell his story. The validity of Williams’ narrative was called into question quickly after it was published and remained in doubt for over 170 years. However, in “Re-collecting Jim,” a recent Common-place article examining the veracity of slave narratives in general, Susanna Ashton, Clemson University professor of English, suggests Williams’ tale is largely true.

The Comic History of the United States from a Period Prior to the Discovery of America to Times Long Subsequent to the Present (1870)
By John D. Sherwood

John D. Sherwood’s lighthearted approach to American history includes this amusing description of Washington, D.C., at the onset of the Civil War. It begins with a reference to the Baltimore Riot of 1861 in which members of the Massachusetts militia en route to Washington were attacked by anti-war Democrats and Confederate sympathizers: 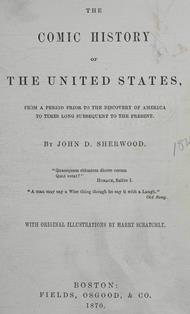 On the 19th of April [the militia] reached Baltimore, and were passing through in the horse-cars, when they were set upon by a bad lot of hards and softs of that city,—as others before and since have frequently been assailed in their transit, by railway and hotel runners. Other regiments soon followed from “the teeming North, through all her unfrozen loins.” Guns were got down from rusted hooks; shoulder-straps straightened; blunderbusses and other busses given and taken; officers beaten up from behind ploughshares to be beaten in first skirmishes into good leaders; and shields from all the free States were clasped around the waist of the capital. Never were there so many gun-holders, nor so few office-seekers, at Washington in the month of April. 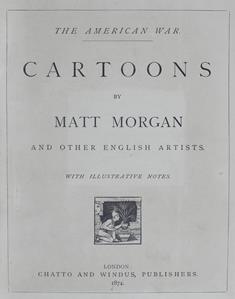 Matt Morgan’s illustrated account of the Civil War offers a European perspective of the conflict and surrounding issues. One such issue, referred to as King Cotton, was the exportation of cotton by the South to Europe. The benefits to the Confederacy of cotton exports were twofold: it would not only ruin the textile industry of New England, but would also force Great Britain and France, whose industrial economy depended on cotton textiles, to support the Confederate States. That dependency is satirized by the image of a “Manchester millionaire” appealing “to the complacent darkey grinning upon his throne of ‘Carolina Sea,’ with the pathetic words, ‘Am not I a Man and a Brother?’”

Autobiography of James L. Smith including, also, Reminiscences of Slave Life, Recollections of the War, Education of Freedmen, Causes of the Exodus, etc. (1881)
By James Lindsay Smith

James Lindsay Smith’s thrilling autobiography includes a dramatic description of a near-death experience during his escape from slavery. Traveling on his own and in the middle of the night, Smith tells what happened when he “came to the portion of the road that had been cut through a very high hill, called the ‘deep cut,’ which was in a curve…”: 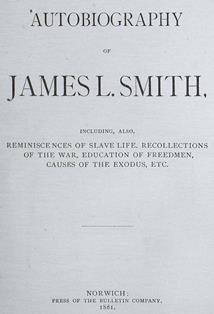 …when I had got about mid-way of this curve I heard a rumbling sound that seemed to me like thunder; it was very dark, and I was afraid that we were to have a storm; but this rumbling kept on and did not cease as thunder does, until at last my hair on my head began to rise; I thought the world was coming to the end. I flew around and asked myself, “what is it?” At last it came so near to me it seemed as if I could feel the earth shake from under me, till at last the engine came around the curve. I got sight of the fire and smoke; said I, “it’s the devil, it’s the devil!” It was the first engine I had ever seen or heard of; I did not know there was anything of the kind in the world, and being in the night, made it seem a great deal worse than it was; I thought my last days had come; I shook from head to foot as the monster came rushing on towards me. The bank was very steep near where I was standing; a voice says to me, “fly up the bank;” I made a desperate effort, and by the aid of the bushes and trees which I grasped, I reached the top of the bank, where there was a fence; I rolled over the fence and fell to the ground, and the last words I remember saying were, that “the devil is about to burn me up, farewell! farewell!”