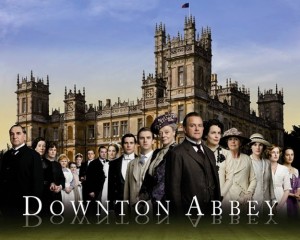 Downton Abbey, a drama that recently ended its second season on PBS about the English aristocracy and their servants during the Edwardian era, has become a cult hit in the United States. A great deal of its appeal is nostalgia for an elegant way of life unfamiliar to most of us. And there is likely not a woman alive who has not wished for a lady’s maid (of a nicer sort) than the dour and scheming O’Brien, lady’s maid to Lady Grantham (Cora Crawley). Ladies’ maids were part seamstress, masseuse, hairdresser, beautician and secretary. Unlike the rest of the servants, they reported directly to the lady of the house rather than to the housekeeper or butler, which set them apart from the others. As Downton Abbey makes abundantly clear, a strict hierarchy ruled "below stairs" too. The butler, housekeeper and ladies' maids were at the top. Because of the close nature of the relationship between the lady of the house and her maid, maids were carefully selected. According to The Lady’s Maid: Her Duties and How to Perform Them, a manual published in 1870,

As the office itself demands great neatness, skill and taste, as well as discretion and cleverness, they choose servants of a better education than ordinary; so that by mistresses and maids this is considered the highest kind of female service.1

Ladies’ maids often had special privileges, such as private sitting rooms, and held rank and authority over the other servants. They were literate, generally well-spoken, could often speak a foreign language and were expected to show a nicety of manners not often expected of the "lower servants." Generally only the wealthiest households in America could afford a lady’s maid. The Duluth News Tribune stated that "in this country a lady’s maid is almost entirely an indulgence limited to the rich…Here the compensation of a good lady’s maid varies from $30 to $60 a month. In Europe it may be half that.2 The News Tribune also noted that a servant class was built into the structure of European life. For example, in Europe, where upper class ladies often travelled with their maids, many hotels set aside certain (cheaper) rooms for the maids. It was rare in America to find such accommodations; the lady’s maid would be expected to be lodged as a regular guest. Some Americans openly disapproved of the very concept of a lady’s maid, calling the practice, as the Cincinnati Daily Enquirer said, "a feeble and ridiculous custom."3 The Enquirer went on to describe the duties of a lady’s maid: "When the lady finally leaves her couch, the maid must proceed to dress her—think of that, our young American women, who would be ashamed to be dressed by another woman!" Ultimately, the Enquirer declared the custom was "a mere affection of foreign habits—a bit of snobbishness."4 Fundamentally, it was un-American. 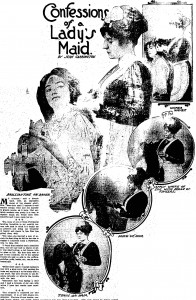 Despite that sentiment, the lady’s maid often became a status symbol in the U.S. America’s wealthiest families adopted the European tradition of ladies’ maids, including the Rockefellers, the Vanderbilts, and the Astors, all of whom, as avidly reported in The Parson’s Weekly Blade, chose women who had lived among the families of European noblemen.5 Due to the highly personal nature of the relationship between the lady of the house and her maid, ladies’ maids were often hired on personal referral. Few want ads can be found for ladies’ maids in the newspapers of the time, but because they were such rare and curious commodities, numerous articles were published about them. No doubt, like today, readers enjoyed fantasizing about the lifestyles of the rich and famous. The lady’s maid was expected to bring her mistress breakfast in bed, help her dress and undress (as many as five times a day), maintain and select her mistress’s wardrobe and jewelry, and style her hair. A skilled lady’s maid was much valued. Such a woman often served as a beautician and stylist. She could give a plain woman confidence as well as the much-desired sophistication and glamour to launch herself successfully into high society. The skills of one’s lady’s maid could mean the difference between triumph and failure. The Daily Inter Ocean amusingly described the transformation of one unpromising debutante by an accomplished lady’s maid. After the "make-over"

not one of all the flock of debutantes could hold a candle to the ugly duckling, chic and distinguished in her carefully chosen gown, her straight brown hair fluffed and curled…the thin neck surrounded by a string of pearls so beautiful that in admiring them and calculating their value people forgot to notice that they covered bones. It was not in that girl to be a brilliant success but she was rescued from oblivion…All owing to the maid.6

Ladies’ maids also sometimes shared their style and beauty tips in the newspapers. The Baltimore American even ran a two-part series called "Confessions of a Lady’s Maid," in which a maid shared her special techniques for beautifying her mistress and improving her figure.7 High society ladies often wore make-up, although many proclaimed they did not. The effect was to look natural, and their figures were often improved by the addition of padding and corsetry. A position as a lady’s maid was not an easy one, subject as she was to the will and caprice of her mistress at all hours of the day and night. No wonder then that some ladies’ maids took advantage of their years of training in service and exposure to the fashions of high society to set themselves up as modistes and hairdressers catering to women of wealth. Ironically, as a lady’s maid interviewed by The Trenton Evening Times said:

Then the positions of maid and mistress are reversed and it is often Mme So and So who drives up in her brougham and requests an audience of her ex-bonne to plead longer time on the milliner’s bill that has grown out of all proportion to her income.8