Within the March 2014 release of Joint Publications Research Service Reports are more than 100 items indexed to the subject term “Cybernetics.” Most of these reports were published during the decade between 1966 and 1976. They reflect the rapidly increasing interest in, and development of, information technology, bionics, and systems analysis. Examples of this expanding capacity, and the challenges and opportunities presented by this new technology, are highlighted this month.

ACADEMICIAN GLUSHKOV FORETELLS FUTURE OF CYBERNETICS
Written in language easily understood by the layman, this 1968 monograph explores the potential of the digital frontier. Almost 50 years later, it is interesting to look back at this early stage in the development of cybernetics and to assess the predictions of a prominent Soviet scholar. The author, V. Glushkov, is described as a “Lenin Prize Winner and Vice-President of the Ukrainian Academy of Sciences.” 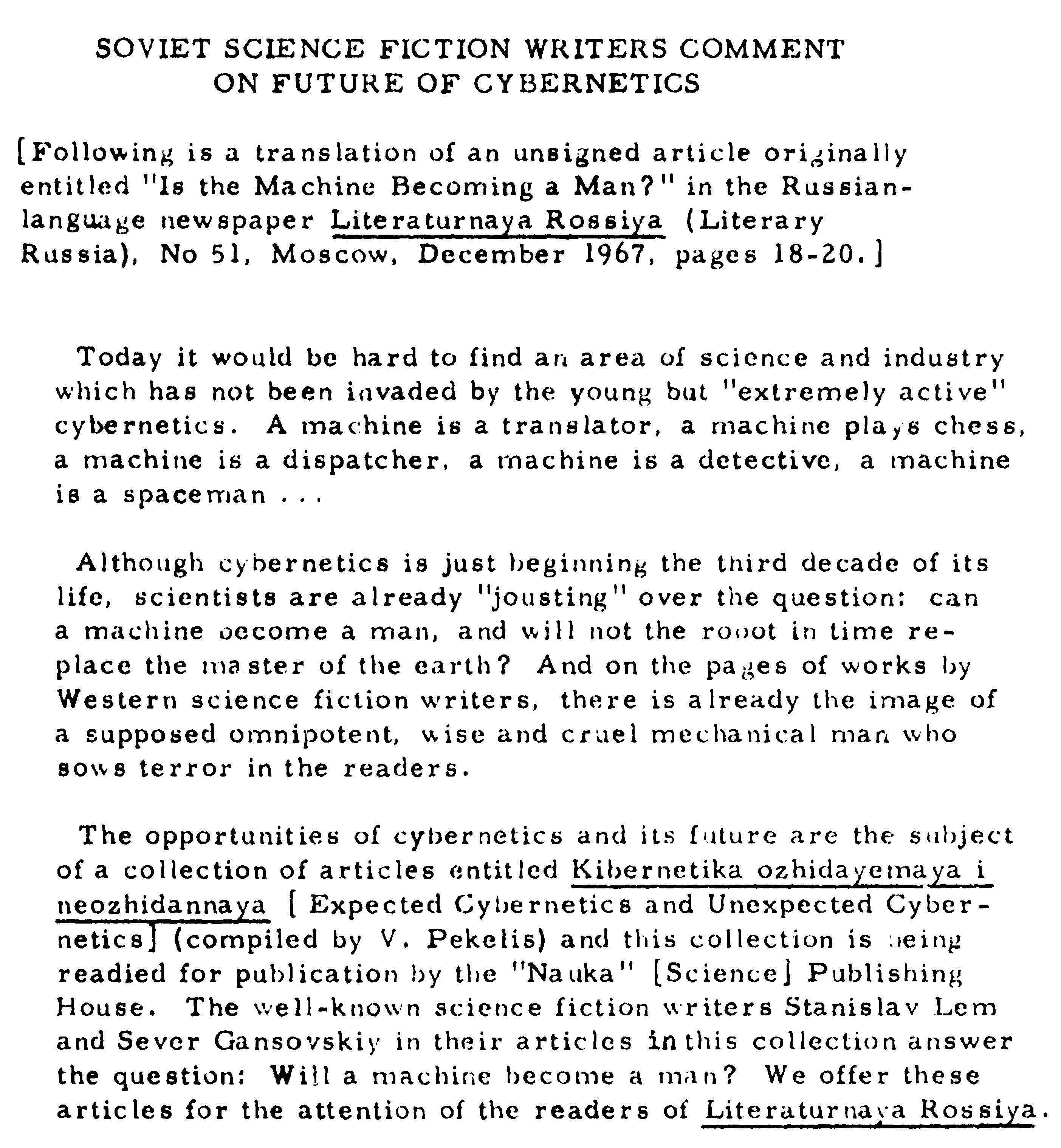 BASIC TRENDS IN THE USE OF CYBERNETICS AND COMPUTERS IN MEDICINE IN CERTAIN COUNTRIES
The author states that “Cybernetics and computers have been actively introduced into the fields of cytobiology, genetics and medical genetics. Computers are helping scientists to investigate not only biological functions but also discover the material basis of the phenomena of heredity, the nature of the genotype and discover the influence of various factors including social conditions on changes in the hereditary cells...”

CYBERNETICS AND LAW
“In the establishment of Communism as a highly organized social-economic formation,” the author asserts, “law pays an important role.” His monograph details the enhancement of this role by the use of cybernetics. He concludes that “The scientific studies conducted in the field of cybernetics permit us to express with certainty that the active and broad utilization of the achievements of cybernetics in legal science and the activity of the judicial organs will favor an elevation of the role of laws and the strengthening of social order in our country.”

CYBERNETICS IN BIOLOGY AND SOCIAL RESEARCH
This report contains articles that explore the role of cybernetics in two areas: The Systems Approach in Social Research and The Problem of “Progress” in Organic Nature. While both of these reports are written in support of and adherence to Marxism, the application of cybernetics to these different disciplines resonates with other political systems.

SOVIET SCIENCE FICTION WRITERS COMMENT ON FUTURE OF CYBERNETICS
“Will a Machine Become a Man?”—that’s the question two prominent Russian science fiction writers examine in this 1967 article. The introduction posits, “A machine is a translator, a machine plays chess, a machine is a dispatcher, a machine is a detective, a machine is a spaceman...,” leading these writers to ask: will robots evolve in time to replace humans?

For more information about JPRS Reports, or to request a trial for your institution, please contact readexmarketing@readex.com.