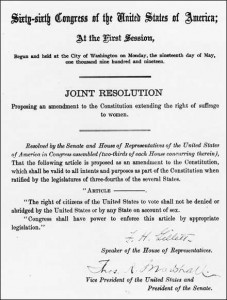 In her recent NewYork Times column titled "My Favorite August," Gail Collins wrote about women getting the right to vote in August 1920.  The previous year—on May 19, 1919—both Houses of the 66th Congress had approved House Joint Resolution 1, proposing the 19th amendment to the 48 states. The Joint Resolution was only two sentences long:

"The right of citizens of the United States to vote shall not be denied or abridged by the United States or by any State on account of sex. "Congress shall have power to enforce this article by appropriate legislation."

The following summer, on August 18, Tennessee became the 36th state to ratify what many referred to as the "Susan B. Anthony federal suffrage amendment."

Click to read full article from August 18, 1920 issue of the Bellingham (Washington) Herald

The history of the 19th Amendment can be found at this page on the National Archives website.  Also available on the same site is an exhibit on the U.S. Constitution, the Bill of Rights, and all the subsequent amendments.