Running amuck is one of the terrors of the East, but is far less common than it formally was….The word amuck is a corruption of amoak, Javanese, to kill, and the thing is simply a miscellaneous, indiscriminate killing. The natives of those Eastern lands become, from long continued, excessive use of opium, ferociously frantic, and their frenzy is often intensified by religious fanaticism. Then, absolutely mad, they rush into the streets—frequently nude—cursing, biting, and stabbing…whomever they encounter.[1]

Although the inspired description of the act of running amuck, as described in this 1880 article, is dubious, its definition and derivation are on firmer footing. The article, continuing its flair for the dramatic, concludes:

Nothing is as formidable as an amuck-runner, and it is not strange that he is mercilessly slain….A European or American who has seen an amuck is very apt to remember it.[2]

The phrase “running amuck” appears in the Early American Newspapers subset of America's Historical Newspapers as early as 1825 in a Daily National Journal article[3] and by the turn of the century it had become ubiquitous. Also pervasive in 19th-century America was alcohol, and much like “excessive use of opium” was seen as a cause of running amuck in the East, so too was alcohol viewed in America.

In 1881 The Daily Picayune reported:

Running Amuck. Whisky transformed a white man, whose name could not be ascertained, from a human being to a demon of destruction, at 6 o’clock yesterday evening, at the corner of Royal and Canal streets. The man had improvised a lance out of a bamboo cane by splitting up one end of it and tying a table knife in the end of it. With this dangerous weapon he walked about and people gave him plenty of elbow room.[4] 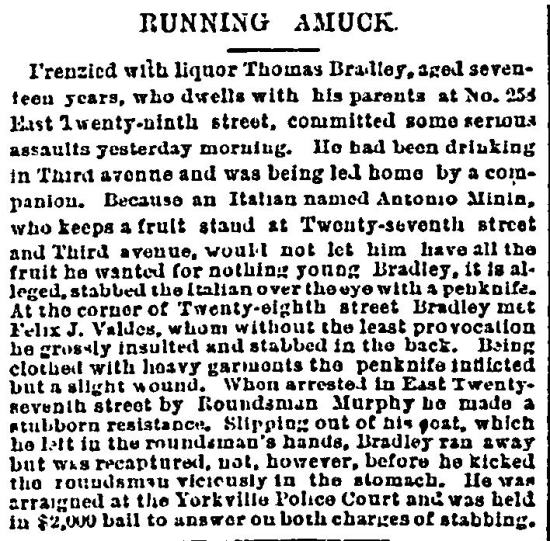 Running Amuck. Frenzied with liquor Thomas Bradley, aged seventeen years, who dwells with his parents…committed some serious assaults yesterday morning. He had been drinking…and was being led home by a companion. Because an Italian named Antonio Minin, who keeps a fruit stand…would not let him have all the fruit he wanted for nothing young Bradley, it is alleged, stabbed the Italian over the eye with a penknife. At the corner of Twenty-eighth street Bradley met Felix J. Valdes, whom without the least provocation he grossly insulted and stabbed in the back.[5]

However, running amuck in America was by no means limited to describing only those who had over imbibed. In 1881 The Indianapolis Sentinel published: 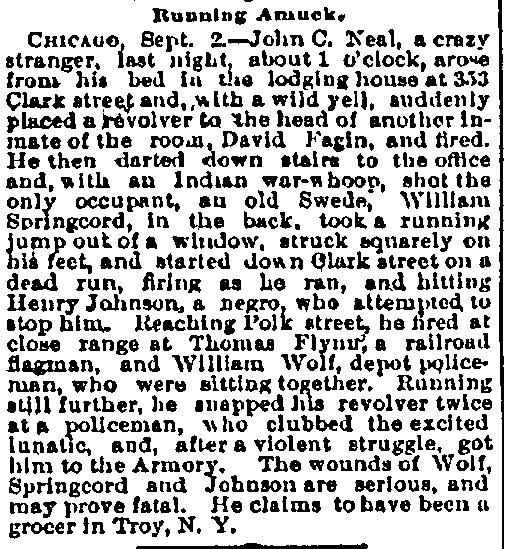 Running Amuck. Chicago, Sept. 2. — John C. Neal, a crazy stranger, last night, about 1 o’clock, arose from his bed in the lodging house at 353 Clark street and, with a wild yell, suddenly placed a revolver to the head of another inmate of the room, David Fagin, and fired. He then darted down stairs to the office and…shot the only occupant…in the back, took a running jump out of a window, struck squarely on his feet, and started down Clark street on a dead run, firing as he ran, and hitting Henry Johnson…who attempted to stop him.[6]

Nor was the expression restricted to reports of murders or assaults. In 1882, under the headline “Running Amuck: A Smallpox Patient Escapes from the Pest-House,” readers of the Jackson Weekly Citizen were exposed to Patrick Ryan’s exploits: 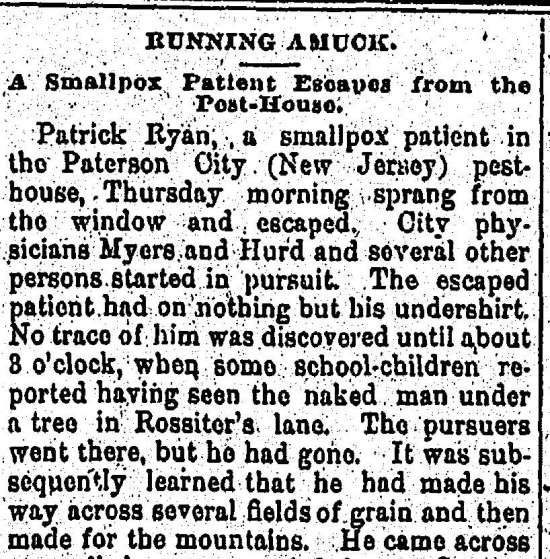 Patrick Ryan, a smallpox patient in the Paterson City (New Jersey) pest-house, Thursday morning sprang from the window and escaped. City physicians Myers and Hurd and several other persons started in pursuit. The escaped patient had on nothing but his undershirt. No trace of him was discovered until about 8 o’clock, when some school-children reported having seen the naked man under a tree in Rossiter’s lane.[7]

The phrase was further broadened to include animals. In 1885 The Philadelphia Inquirer printed an article titled “Running Amuck: The Feats of a Wild Steer on Girard Avenue.”

Last evening about seven o’clock, while a drove of cattle was being driven to the slaughter house…a Western steer got separated from the rest of the herd, and cantered down Charlotta street with gleaming eyes and tossing head, the pedestrians giving him plenty of room, and closing in behind him with hue and cry. Arriving at Girard avenue the canter became a wild gallop, and turning to the right the animal dashed down Girard avenue, people scattering to the right and left…[8]

After the steer gored a woman and caused further mayhem, a police officer commandeered a wagon “and was driven alongside the steer, who was foaming at the mouth, and with his wicked eyes and cruel-looking horns presented anything but an inviting sight.”[9] 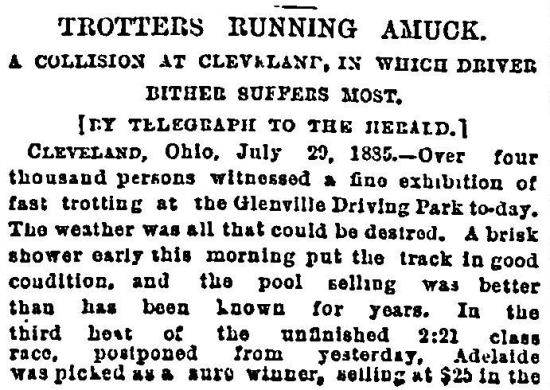 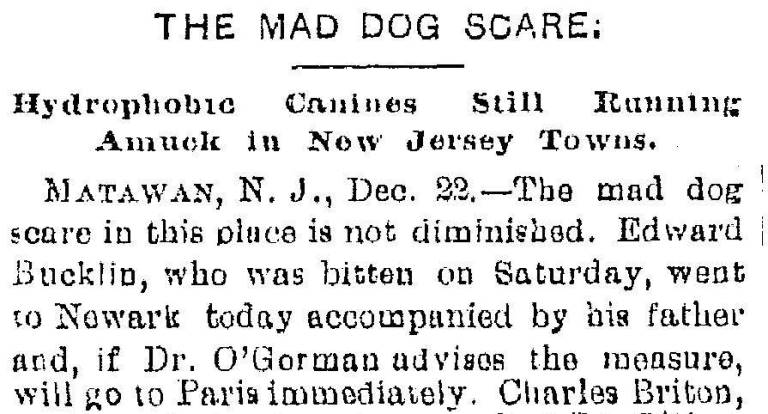 And mules: “Bitten By A Mad Mule: Running Amuck Through the Streets.” According to this 1886 article from the Kalamazoo Gazette:

The infuriated beast, broke loose from its stable and attacked its owner, biting him on the head, and seizing his hand with its teeth dragged the man 200 yards until the hand was nearly severed from the arm. The mule then charged through the streets attacking every person and every object it met. All the inhabitants took to flight and for half an hour the brute remained master of Avignon.[12]

Even a camel: “New York, Jan. 11. – A flat-footed, long-legged, hump-backed, long-necked camel ran amuck in Broadway just after 9 o’clock Tuesday night and had a lively little time of it.”[13]

Running amuck was even used to describe inanimate objects. In 1885 The New York Herald published “Speeding to Destruction: An Ice Yacht Running Amuck on the Hudson without Guidance.”

The pilot of the ice yacht, the Frost, had stepped away from his craft to inspect a crack in the ice when:

suddenly a tremendous flaw struck the Frost…and she dashed with lightning speed on short tacks of 200 feet toward the crack, her rudder still crossways, the wind shrieking in her cordage and her rudder scraping along over the ice. On one of the tacks another heavy flaw struck her, when she whirled about as quickly as a weather vane struck by a tornado, and charged head on into the Hudson River Railroad track.[14]

And, nearly a year later, from The Daily Picayune: “Running Amuck: A British Steamer, Going to Sea in the Fog. Crashes Into Several Vessels.”[15] 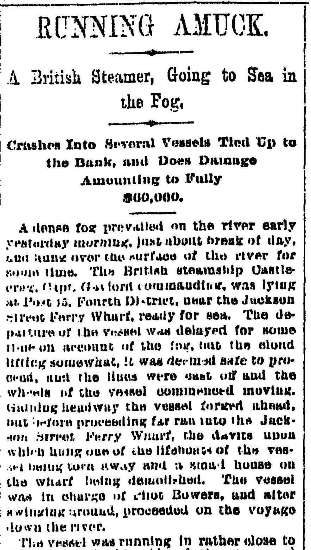 Unsurprisingly, “running amuck” became part of the political vernacular, whether describing, as in 1909, an administration in danger of running amuck:

Mr. Roosevelt made a promise early in his career as President, either directly or through some of his cabinet officers, that the government under his administration would not run amuck.[16]

Or, in the following year, one safely avoiding it. A Charlotte Daily Observer article titled, “The Administration Not ‘Running Amuck,’” reported:

The spirit of the law must be respected, and the trusts that deliberately and cruelly crush competitors and rob the consumers must be brought to book. But to prosecute corporations that are possibly technical violators of an extreme and vague statute is to ‘run amuck,’ and the Taft administration is too sober and sensible to contemplate such destructive campaigning.[17]

Even academics could be characterized as amuck-runners. For some, as reported in The Anaconda Standard in 1911, it was “Science Running Amuck”:

It’s getting so nowadays a scientist doesn’t care what kind of traditions he’s upsetting so long as he can be proving a lot of people wrong in what they’ve believed. Having been at this ruthless campaign for several years, they managed to get a pretty goodly proportion of everything reduced to scientific basis…[18]

And for others, the concern was over “History Writers Running Amuck.”[19] 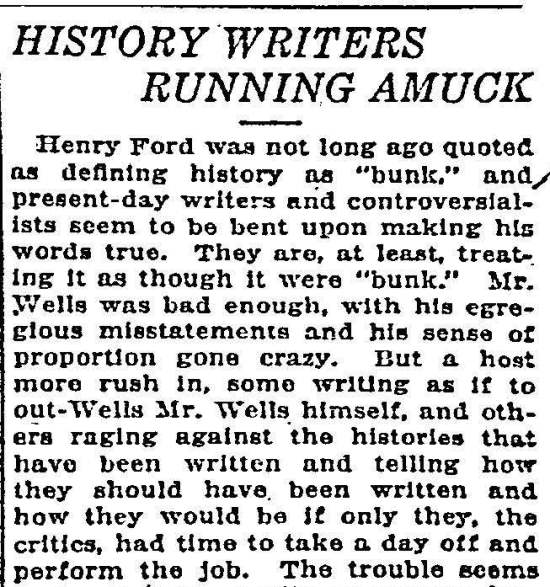 Perhaps most intriguing is when running amuck itself runs amuck. In 1881 The Cincinnati Commercial published this story:

David A Vlat, a carpenter…endangered the lives of several persons yesterday afternoon and came within an ace of losing his own. He had been drinking freely, and his actions…led a dog to bark at him. Vlat pulled a self-cocking revolver and killed the animal on the first shot. With the revolver still in his hand, he went out Ninth street to the canal, where he fired at some boys who were playing on the banks of that stream. Following the canal to Court he took across to Broadway, and there meeting another group, he selected David Walsh as a target and blazed away. Walsh hurled a convenient brick at the man, hitting him on the side, and the attention of the shooter being distracted for the time being, Edward Brown jumped in, grasped the weapon, the hammer falling harmlessly on the flesh between his thumb and forefinger. The new large crowd closed in on Vlat and had knocked him down and were wreaking vengeance when Officer McFarland appeared and effected a rescue, but not without difficulty, as the men were bent on immediate punishment.[20]

Or, as reported in 1883 in the New York Herald under the headline, “Running Amuck with a Carver: How a Man Who Thirsted for Gore Was More than Satisfied”: 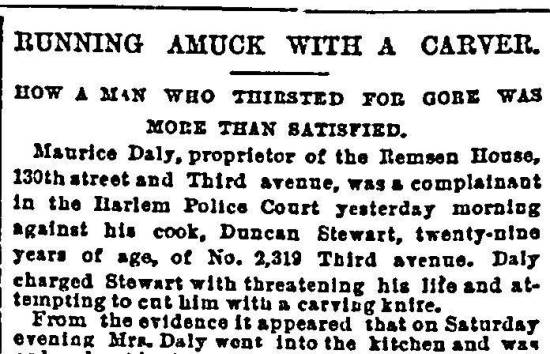 Finally Stewart seized a carving knife, about eight inches long and sharp as a razor, and rushed at Daly. The latter fled upstairs and took refuge in the parlor, locking the door. Failing to find Daly, Steward entered the dining room and attacked a boarder named George Daniels, who was eating supper. Daniels, who is a small man…jumped to his feet and faced his assailant, who is almost a giant in size. Stewart made a desperate lunge at Daniels with the knife. The latter dexterously warded off the blow and struck out straight from the shoulder, hitting Stewart a terrible blow between the eyes. That somewhat staggered the bloodthirsty cook, and before he could recover Daniels struck him two or three times more, knocking him down. Daniels than applied his feet to Stewart’s head, and when the policeman…entered…the cook lay doubled up in a corner and Daniels was sitting at the table finishing his repast as though nothing had happened.[21]

And, finally, some timeless advice from the Miami District Daily News:[22]

For more information about Early American Newspapers, or to request a trial for your institution, please contact readexmarketing@readex.com