Six Highlights from the First Release of Early American Imprints, Supplements from the American Antiquarian Society, 1652-1819

Six Highlights from the First Release of Early American Imprints, Supplements from the American Antiquarian Society, 1652-1819

The initial release of a major new enrichment to the Evans and Shaw-Shoemaker collections has just occurred. Rare items from the American Antiquarian Society, available for the first time in Readex digital editions of Early American Imprints, are highlighted below. 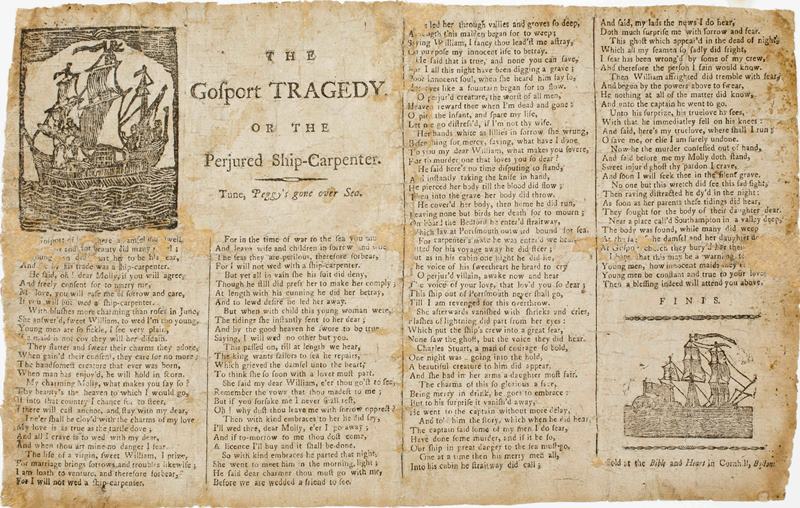 The Gosport Tragedy, or The Perjured Ship Carpenter, is a murder ballad set to the tune of Peggy's Gone Over Sea. The folk song tells of a young woman lured by her lover into the forest where she is killed and buried in a shallow grave. In this version of the story the woman, Molly, is murdered by a ship’s carpenter, William, who had promised to marry her after she became pregnant. When William returns to sea, he is haunted by Molly’s ghost and confesses to the murder before going mad.

In other versions the woman is named Polly and the song is titled Pretty Polly. Some have suggested the ballad is the musical basis for Ballad of Hollis Brown by Bob Dylan who, in his early career, played the song under the title Pretty Polly. Woody Guthrie also used the tune for Pastures of Plenty. 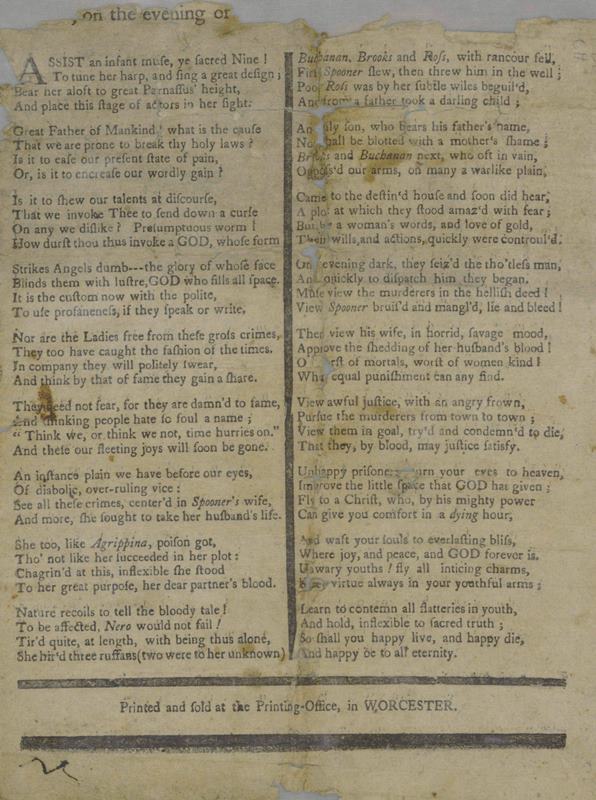 Joshua Spooner was the victim of a murder conspiracy involving his wife and her lover. Though this was neither the first nor last of such conspiracies, this particular mariticide is notable because Joshua’s wife, Bathsheba Ruggles Spooner, would become the first woman to be executed in the United States by Americans rather than the British.

Born in 1746, Bathsheba Ruggles was the daughter of Brigadier General Timothy Ruggles who served in the French and Indian War and later as chief justice of the Court of Common Pleas in Worcester, Massachusetts. A proud Loyalist, Ruggles threatened to raise an army to protect his and other Loyalist farms and, in 1774 after joining forces with the British Army in Boston, he was banished from Massachusetts.

Unhappy in marriage and suffering a confessed aversion to her husband, Bathsheba began an affair with Ezra Ross, a soldier in the Continental Army. After Spooner became pregnant she conspired with Ross and two servants before eventually including two British soldiers in her murder plot. Joshua was beaten to death by one of the soldiers on March 1, 1778, and on July 2nd of the same year Bathsheba, her lover, and the two soldiers, Buchanan and Brooks, were executed.

An instance plain we have before our eyes,
Of diabolic, over-ruling vice:
See all these crimes, center’d in Spooner’s wife,
And more, she sought to take her husband’s life.

She too, like Agrippina, poison got,
Tho’ not like her succeed in her plot:
Chagrin’d at this, inflexible she stood
To her great purpose, her dear partner’s blood.

Nature recoils to tell the bloody tale!
To be affected, Nero would not fail!
Tir’d quite, at length, with being thus alone,
She hir’d three ruffians (two were to her unknown).

Buchanan, Brooks and Ross, with rancour fell,
First Spooner slew, then threw him in the well,
Poor Ross was by her subtle wiles beguil’d,
And from a father took a darling child;

In an interesting twist of fate, Bathsheba Spooner’s death warrant was signed by John Avery, Jr., the leader of the Massachusetts Executive Council, a member of the innermost circle of the Sons of Liberty which had opposed Timothy Ruggles, and Joshua Spooner’s stepbrother. 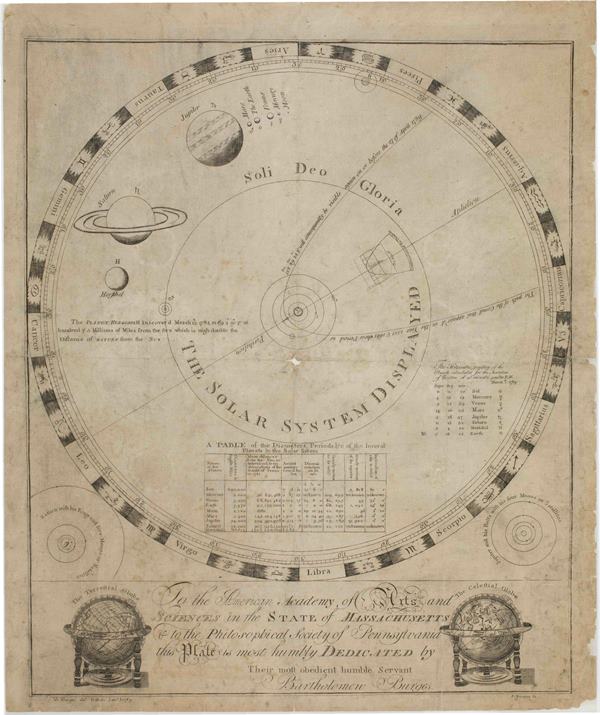 Bartholomew Burges dedicated this intricate and surprisingly accurate map of the known solar system to the Academy of Arts and Sciences in the State of Massachusetts and to the Philosophical Society of Pennsylvania. Although this map was created 48 years prior to the discovery of Neptune and only eight years after the official discovery of Uranus, labeled here after its discoverer William Herschel, it includes Saturn’s rings and five of its moons as well as four of Jupiter’s moons. Even more amazing is the accuracy of the table showing the various planets’ distances from the sun. 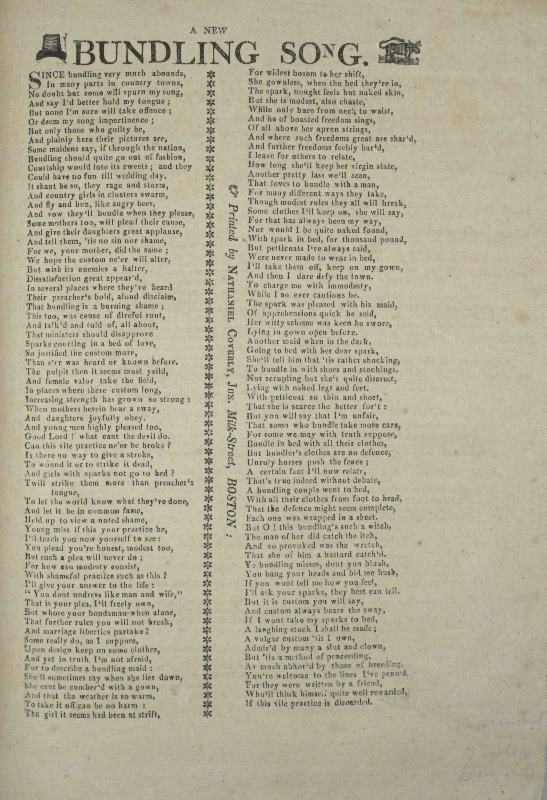 The custom of bundling was common in colonial America. In the winter parents of young single people would allow the boy to visit the girl’s home where they would both be wrapped separately in blankets and allowed to share a bed, thus permitting intimacy but preventing impregnation. This somewhat ribald poem seems quick to impugn some young women. 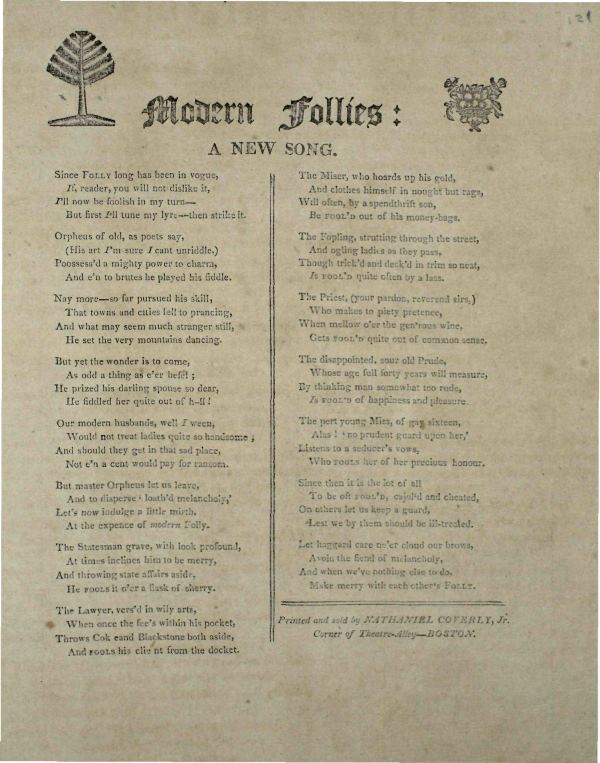 The poet begins by describing Orpheus fiddling his wife out of Hell and asserts that modern husbands wouldn’t lift a finger to rescue their wives from perdition. In comic verse he lampoons statesman, lawyers, pert young maidens, and sour old prudes.

The Happy Child: Being a Narrative of the Holy Life and Peaceable Death of a Remarkable Pious Child of Hertfordshire, England (1810) 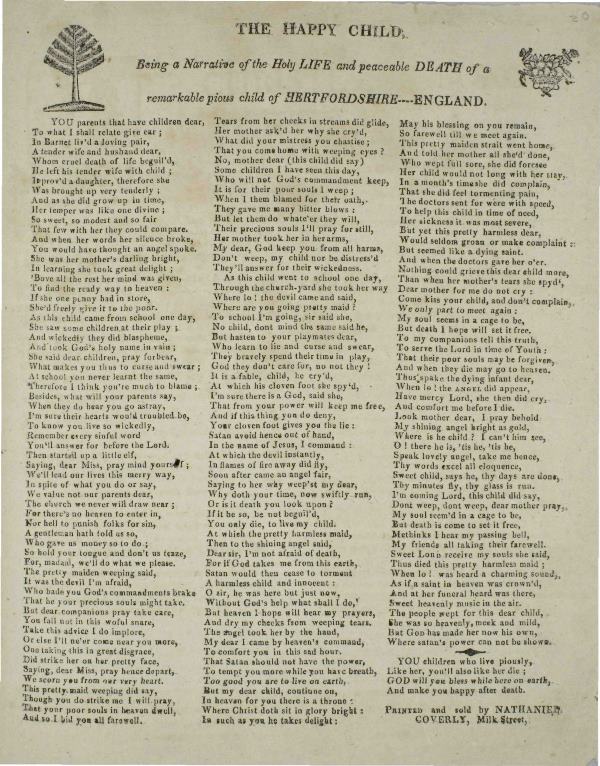 This poet tells the story of a widow and her daughter. The daughter is confronted by Satan and urged to skip school to play with her little friends who “lie and curse and swear.” But she is not fooled. When the child falls and dies, she goes to heaven where the Devil cannot touch her. He advises other children to live as piously as she so they too can escape the predations of Old Nick.