A Sports Legend and His Dream: Bobby Jones, the Augusta National Golf Club and the Birth of the Masters

A Sports Legend and His Dream: Bobby Jones, the Augusta National Golf Club and the Birth of the Masters

Bobby Jones entered the Roaring Twenties still the teenage prodigy who had first come to the public's attention when he qualified for the U.S. Amateur Championship at the age of 14. By the end of the 1920s, Jones was firmly established as a major star. The only golfer considered one of the true icons of the Golden Age of Sports, Bobby Jones stood alongside Babe Ruth, Red Grange, Jack Dempsey and Bill Tilden as giants in the public eye.

Jones’ road to success was not as quick, or easy, as his precocious abilities might have made it appear. It took several years, a few near-misses, and evolving maturity before Bobby broke through. Although winning the amateur championships brought enough glory and achievement to earn him a place in golf's pantheon, Bobby took his fame a major step further by regularly beating the top professionals of the day. He won three British and four U.S. Opens against strong fields that included such legends as Walter Hagen and Gene Sarazen—the only two U.S. golfers of that period whose triumphs earned them a mention alongside Jones. Beating professionals at their own game elevated Jones beyond golf and made him one of the most popular sports stars in the United States. Such was the public affection for Bobby Jones that he remains the only individual athlete to be honored with two New York City ticker-tape parades. The second ticker-tape parade, in 1930, celebrated Jones’ unprecedented Grand Slam.

By winning both the Open and Amateur Championships of Great Britain and the United States, and thus triumphing both at home and overseas against fields made up of the finest players in the world, Bobby’s accomplishment was unparalleled. 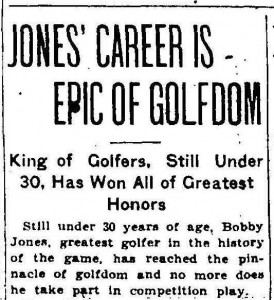 After his Grand Slam, Jones was eager to escape the pressures of both celebrity and championship-caliber golf.

For a one-dimensional athlete, retirement from his or her chosen sport can be a challenge greater than any faced on the fields of competition. Jones, however, was a well-educated, intelligent soul interested in much more than the game of golf. Not only had he earned undergraduate degrees from Georgia Tech (B.S., Mechanical Engineering) and Harvard College (B.A., English Literature), but after just one year of law school at Emory he passed the Georgia bar exam. Jones looked forward to embracing the rewards of a well-rounded life. Determined to remain part of the golf world, Jones sought to establish a club with members from across the nation. It was to be situated in a climate warm enough for winter play. Members were to be successful men who took their golf seriously and had the financial standing necessary to form the type of club that Bobby envisioned. On July 15, 1931, The Augusta Chronicle devoted most of its front page to coverage of the announcement that Jones and his associates were founding the Augusta National Golf Club. Nearly six of its eight columns were necessary to display four articles on Jones and his new club. 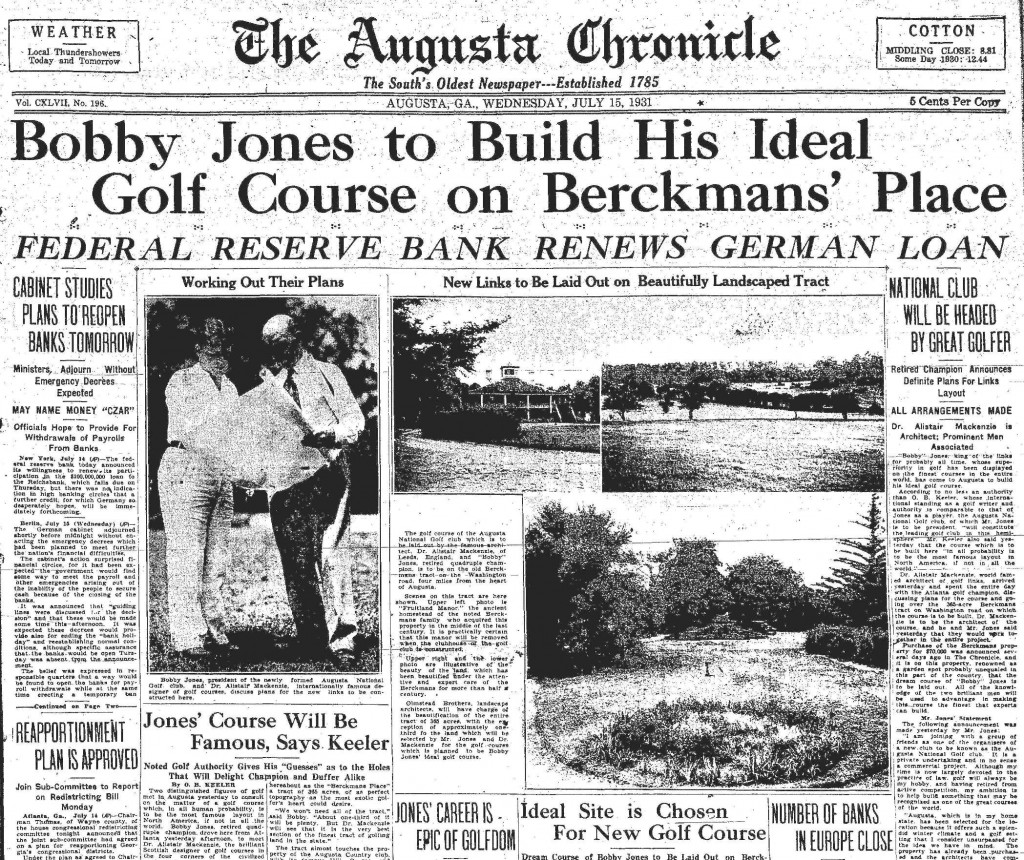 Among the specific details in the Chronicle’s reporting were items such as: 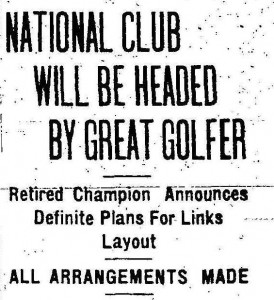 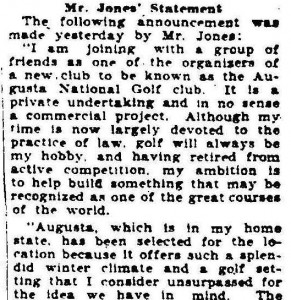 The site Jones chose was a former nursery with enough land to build several courses: 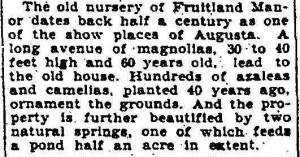 Jones discussed his intentions for the club:

O.B. Keeler, famed golf writer and long-time chronicler of Jones’ career, made a prediction that at the time might have seemed more fantasy than fact, but now seems remarkably accurate: 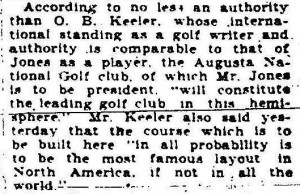 Even with Jones’ involvement, building a new golf course in the early years of the Great Depression was no small challenge. Few private clubs would open during the 1930s, and many established clubs closed, falling victim to the tough economic times. Not until the Works Progress Administration began building public courses later in the ‘30s would course construction resume with any regularity. By encouraging a national membership, Jones and his backers had access to enough capital to make this confident statement:

Jones intended to use his experiences playing the world's great golf courses to lay out the new course, but realized he needed a professional golf course architect to ensure the greatest success. He chose Alister MacKenzie, a Scottish physician-turned-course designer as his architectural partner: 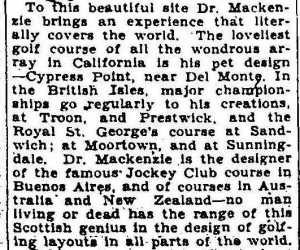 With sufficient financing, excellent topography and natural features, as well as the best design instincts of both Jones and MacKenzie, the course was ready for its debut in January 1933. The Chronicle’s coverage is replete with interesting details: 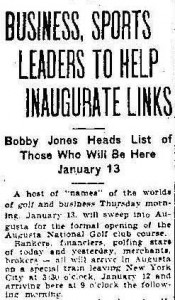 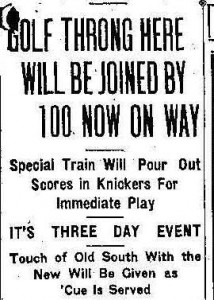 The reporting hints at the affluence of the visiting golfers:

In addition to the obvious attractions of warm southern weather and Jones' hospitality, the course itself was to be the star of the gathering:

The Masters, world famous as one of golf's major championships, has been played since 1934. Conceived by Jones, the annual event was intended to bring the top professional and amateur players together in the spring when the Augusta National course would be at its best. Originally called the "Augusta National Invitational Tournament,” the hometown Chronicle began referring to it as the "Masters' Invitation Tournament." By 1939 this was shortened to the Masters, a name known today by even the most casual sports fans. At first the Masters’ primary draw was less the prospect of seeing out-of-town competitors than watching the great Bobby Jones in action once again. Jones had entered no important tournaments since his post-Grand Slam retirement in 1930, but was still in the public eye thanks to a series of instructional films made in Hollywood as well as golf equipment endorsements which he had accepted after retiring from amateur competition. While Jones intended the tournament to be a gathering of old friends and top-level players, his other aspirations were publicity and recognition for his new club and the resulting prestige that would come from hosting such an event. Though he was firmly retired there was much speculation about how Bobby would do in his dual roles of host and competitive golfer.  Speaking to reporters on the eve of play, Bobby said, "I hope to step four fast rounds," but sportswriters knew that his putting was not thought to be tournament-ready.

The first Masters was a rudimentary affair compared to today's professional production with its worldwide live media coverage and sold-out crowds proudly holding one of the toughest tickets in all sports. Prize money in the heart of the Depression was far more modest than today's seven-figure purses and first-place checks. The first playing featured a total purse of $5,000, $1,500 of which went to winner Horton Smith. The March 26 edition of the Chronicle featured extensive coverage: 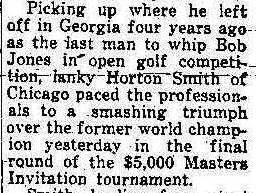 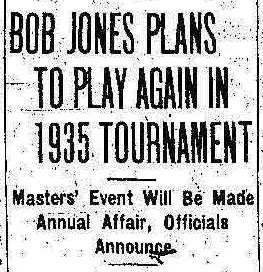 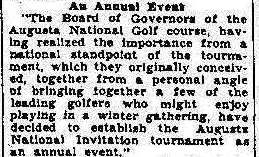 The following year would see changes to the course, something that would become a regular occurrence at the Augusta National through the decades. Although the course remains basically the same as the original design by Jones and MacKenzie, it has continued to evolve. In 1935 the tournament drew extra attention when winner Gene Sarazen holed his second shot at the par-five 15th for a headline-making double-eagle during his triumphant final round. Bobby Jones would remain an integral part of both Augusta National Golf Club and the Masters tournament through the remaining years of his life. Even today he is still listed as the Club’s President-in-Perpetuity. 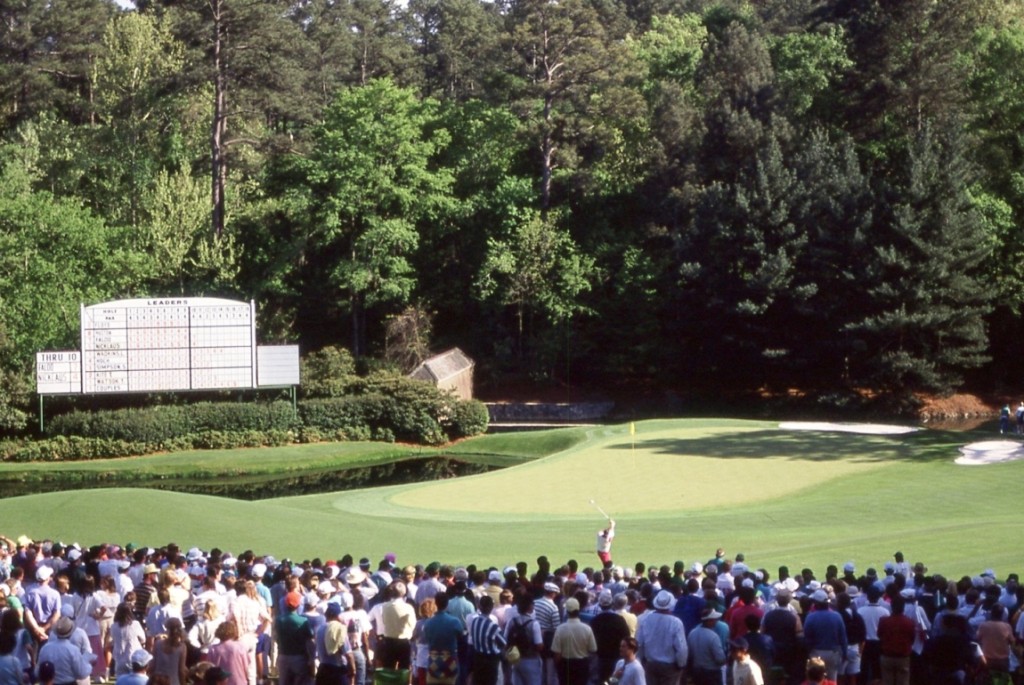 This view of the 1990 Masters shows the gallery watching play on the 12th tee with the 11th green in the background. (Copyright: Larry Petrillo)

Forty years after Jones’ death, the Masters retains its unique position in championship golf—the first men's major of the year. For many northern golfers the Masters is proof that spring is on its way. It remains the only major championship played at the same course each year, a course that thanks to extensive television coverage is as well known to many golfers as their own home course, despite the club’s exclusive nature during the other 51 weeks of the year. Today, the lasting popularity of Augusta National Golf Club, and the continued success of the Masters, is a fitting legacy for Bobby Jones, a legendary champion and stellar sportsman. [Editor's note: The articles and black-and-white images above are found in America's Historical Newspapers. To learn more, please contact readexmarketing@readex.com.]
Tags
Filed under