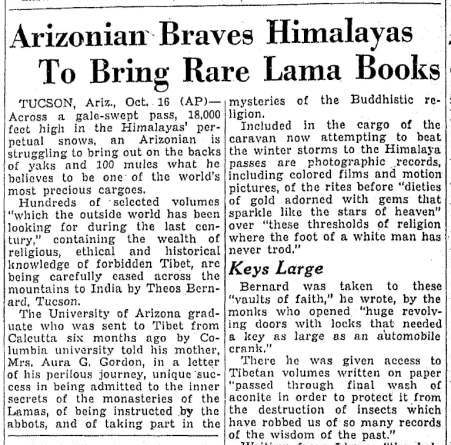 How can you not read on after that dramatic opening? We know what his cargo is from the headline—“Arizonian Braves Himalayas to Bring Rare Lama Books”—but how did he get this treasure? Where did the 100 mules come from? And where is he headed?

Quotations within the news story come from a letter to his mother, Mrs. Aura G. Gordon.

“Hundreds of selected volumes ‘which the outside world has been looking for during the last century,’ containing the wealth of religious, ethical and historical knowledge of forbidden Tibet, are being carefully eased across the mountains to India, by Theos Bernard, Tucson.”

Moving along in the article we get this news:

“Included in the cargo of the caravan now attempting to beat the winter storms to the Himalaya passes are photographic records, including colored films and motion pictures of the rites before ‘dieties [sic] of gold adorned with gems that sparkle like the stars of heaven’ over ‘these thresholds of religion where the foot of a white man has never trod.’

“Bernard was taken to these ‘vaults of faith,’ he wrote, by the monks who opened ‘huge revolving doors with locks that needed a key as large as an automobile crank.’ There he was given access to Tibetan volumes written on paper ‘passed through final wash of aconite in order to protect it from the destruction of insects which have robbed us of so many records of the wisdom of the past.’”

And later in the article:

“’I have been several times to the Potala and have visited every one of its hidden shrines of entombed religious wealth. It has been my unprecedented experience of being able to take part in a ceremony held before the tomb of the late Dalai Lama which is over 60 feet in height and covered with solid gold and studded with priceless gems.’”

His return to the U.S. is also covered by the papers. Here’s a headline to be savored from the distance of 75 years.

This North America News Alliance (NANA) article was written by Ira Wolfert, who would win a Pulitzer Prize during World War II for his reporting about the naval battle of Guadalcanal. His story of Bernard is in quite a different vein. He writes less breathlessly about Bernard and his exploits than in the first article above.

“As a lama he was enabled to penetrate the sacred mysteries of this remote and largely unknown country which is the last theocracy or totally church-ruled nation, on earth. He has brought back with him, in addition to 10,000 photographs and many valuable manuscripts, a knowledge of the socalled [sic] tantric principle by means of which Buddhist monks and hermits perform feats which are generally regarded as incredible to the Western world.”

Those feats included stopping breathing, going without sleep, slowing his heartbeat and halting the “flow of blood from a severed vein by sheer power of the will.” Wolfert describes him as “a tall, trim, pink-cheeked young man with wavy brown hair and blue eyes and an affable smile.”

Bernard tells Wolfert, “He became interested in Buddhism...because he was restless ‘about what the world and life and everything was all about, what it meant and so forth. I knew I couldn’t find out if I remained a lawyer in Tucson.’”

Bernard writes about his adventures and NANA syndicates his articles to newspapers across the country. This one talks about life in Lhasa.

On 20 February 1938, the Seattle Sunday Times publishes a full page about Tibet with many photographs taken by Bernard. This article starts:

“The land of the lost horizon lies high up on the world’s frost-bound roof-tree, remote and mysterious behind the eternal barrier of the towering Himalayas.

“Here, in Tibet, is the forbidden realm that James Hilton chose as the setting for his fascinating tale, ‘Lost Horizon.’ And while that tale was fiction, the reality is hardly less strange.

“In Tibet’s lofty mountain passes, on its limitless windy plains, in its quaint, isolated towns, there is a strange sense of remoteness from ordinary life; a feeling of wonder and of terror, of unseen powers that lie hidden, of a culture and a knowledge incredibly ancient, brooding and hiding thru time and letting the outer world go its unheeded way…

“Foreigners are forbidden to enter Tibet. The natives regard all strangers as intruders: a few explorers who have gone in have come out with tales of how they were robbed, attacked, beaten, refused food, and left to starve in the desert.

“But a young American – a smiling chap from Arizona named Theos Bernard – recently went into Tibet and made himself welcome there.” 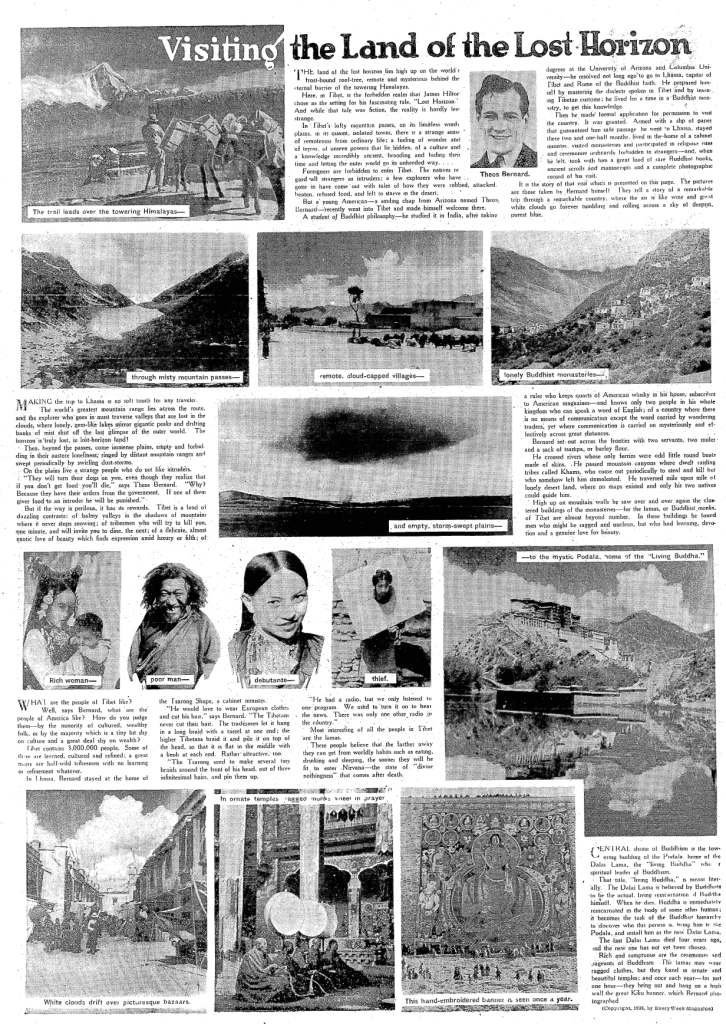 Bernard lectures across the country. In 1939, he publishes an account of his travels and what he has learned under the title Penthouse of the Gods. The Augusta Chronicle gave it a mostly positive review, praising the photographs of Tibet especially. This quote from it wouldn’t become a back page blurb, though:

“Mr. Bernard, who holds a doctor’s degree from Columbia University, has collected some of the most interesting material ever presented in a book. However, he allowed his ego to become entirely too evident in the conversion of this material to the printed page.”

In 1943, he’s teaching yoga to Polish-born opera star Ganna Walska. The tone of newspaper coverage seems to have changed from wonder at his exploits to a more skeptical attitude about his claims. The article concludes with the news that he’d been sued by the husband of a former student. He later marries Walska. When they divorce, he seeks maintenance and support from his wealthy wife. He wins both. 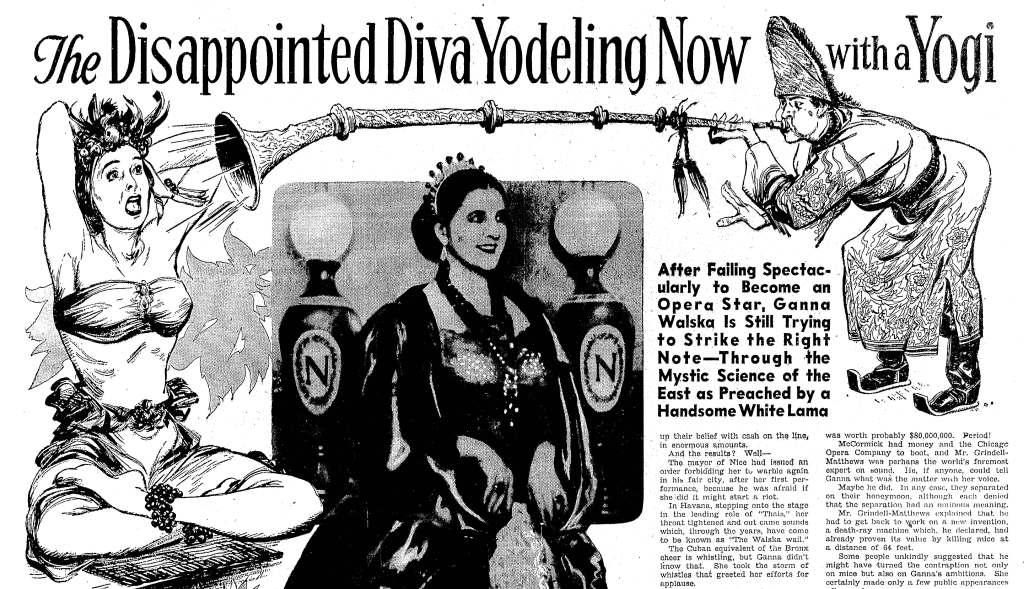 Three years later another article in the same paper disparages his connection with Walska:

“Dr. Bernard was different. He was younger. Furthermore, while he claims to be the only white Lama, the intimate of the secrets of Yoga, and to have been hailed by Tibetan monks as the Guru Rimpoche come back to earth, he said he wasn’t able to support himself.” 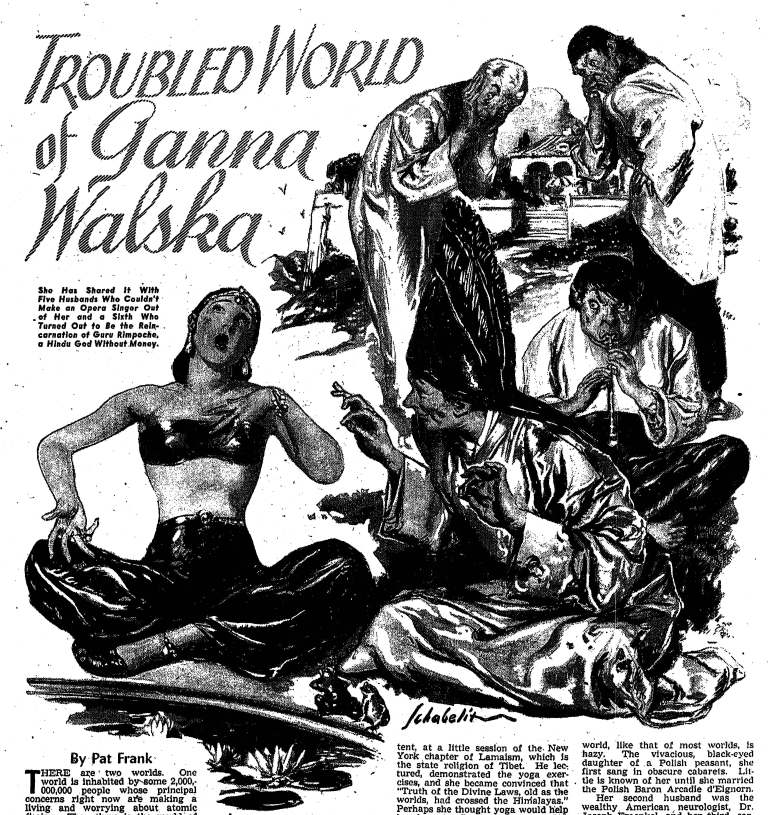 In the fall of 1947, Bernard returns to India with another wife. On a trek to a monastery, he is set upon by bandits and presumably perishes.

Let’s remember this is not an episode of “Young Indiana Jones.” He’s a real person. A new biography by Paul G. Hackett, published in 2012 by Columbia University Press, documents Mr. Bernard’s life in Tibet through photographs and other rare materials. Hackett tells us that the books Bernard brought back ended up at Yale and the University of California, Berkeley. Bernard’s biographer also tells us something not found in these newspaper articles: Bernard was the nephew of Pierre Bernard, who styled himself “Oom the Omnipotent” and ran a high society ashram outside New York City in the 1920s. Oom shows up first in America’s Historical Newspapers after being arrested in 1910 for persuading a young girl to come to New York with him. Theos’ ‘aw-shucks,’ seemingly disingenuous quote about why he was interested in Buddhism in the Wolfert article above must be revisited in light of this knowledge.

Theos’ first wife is named by NANA reporter Ira Wolfert in 1937 as “Dr. Viola Bernard, of the Jersey City Medical center, who is interested in psychiatry” and described as “young and pretty.” Her online biography at the Adoption History Project, hosted by the University of Oregon, gives us much more detail than Wolfert’s article provides: “Viola Bernard was a pioneering social psychiatrist whose vision of mental health presumed fundamental links between the lives of communities and the lives of individuals.” After detailing her professional accomplishments, the Adoption History Project University of Oregon article says, “Known by close friends and family as ‘Vi,’ Bernard was by all accounts a very forceful personality: at once charismatic, opinionated, loyal, intimidating, admirable, and absolutely determined to achieve her goals.” It doesn’t mention Theos Barnard. Yet her accomplishments might cast Bernard in a different light, their marriage helping to emphasize his academic and serious side.

Similarly, Ganna Walska spent years turning the property they bought in California, which Bernard hoped to use to house Tibetan monks, into a showcase garden called Lotusland, which since her death in 1984 has been open to the public. She had a depth to her that the 1940s articles shown above didn’t see.

Several of Theos Bernard’s books are still in print. An exhibition of Tibetan art collected by Bernard at the Blanton Museum of Art in Austin, Texas, closed last month. In addition to Hackett’s biography of Bernard, another by Douglas Veenhof was published in 2011 by Crown Publishing. There is also a biography about Oom the Omnipotent, who ends up a respected citizen of Nyack, NY.

Praised by his alma mater, subject of multiple biographies, his collections forming the basis of two academic libraries, Theos Bernard is far more complex than either the 1930s articles lionizing him or the 1940s articles dismissing him. How should we view him today? Were Bernard and his Uncle Oom charlatans? Were they on the leading edge of the counterculture? Were they serious students of Eastern mysticism or were they out for a buck? Were they both? Had Theos Bernard lived past 1947 would we view him differently, or merely more completely? Had he survived, living in California, into the 1960s, would he have become a respected writer about Buddhism and Tibet like Alan Watts and others? Had he lived, his autobiography would have made fascinating reading.