The “Unhallowed, Demoralizing and Blighting Influences” of Slavery 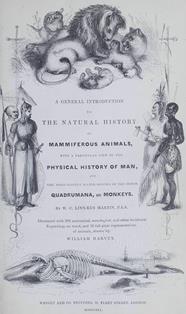 The December release of Afro-Americana Imprints, 1535-1922: From the Library Company of Philadelphia includes documents on an arresting array of subjects. Highlighted here are imprints about natural history, a religious justification of slavery, judicial opinions in the Dred Scott case, and a critique of a work of Reconstruction-era fiction.

A General Introduction to the Natural History of Mammiferous Animals, with a Particular View of the Physical History of Man, and the More Closely Allied Genera of the Order Quadrumana, or Monkeys (1841)
By William Charles Linnaeus Martin

This voluminous work ranges over many topics and includes this brief foray into phrenology. 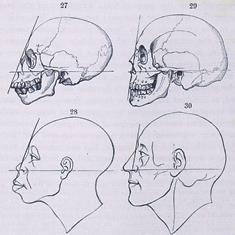 n, in the development of the cerebral hemispheres, and, consequently, in the proportionate expansion of the cranium to the face, exceeds every other mammal: not only so, but, which is more important, in the amplitude of its frontal portion, corresponding to the magnitude of the anterior lobes of the brain.…[As] animals differ much from each other in the proportions…between the cranium and the face, and, indeed, as different races of the human family also present certain degrees of variation, physiologists have attempted several methods by which to arrive at an exact knowledge of the respective proportion of the two parts, justly regarding it as a point of interest and importance. Among these methods…is the employment of the facial angle. The mode of ascertaining this angle is, by drawing a line from the most prominent part of the forehead to the edge of the upper incisors, and then by marking a basilar line from the external aperture of the ears to the lower edge of the aperture of the nostrils, so as to bisect the previous line: the angle, thus formed, is termed the facial angle, which Camper states to be fifty-eight degrees in the young Orang, seventy in the young Negro, and eighty degrees in the European; the acuteness of the facial angle being supposed to be in proportion to the inferiority of the subject, in the scale of mental development, and vice versa.

Frederick Ross was born in Virginia, educated in Pennsylvania, and employed as a Presbyterian pastor in Tennessee. Although Ross emancipated his slaves when he entered the ministry, he maintained “that slavery is part of the government ordained in certain conditions of fallen mankind.” Ross argued the purpose of his book was “to maintain harmony among Christians, and to secure the integrity of the union of this great people.” He continued: 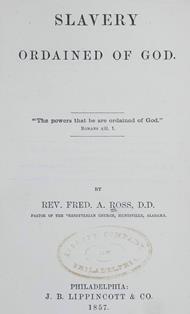 This harmony and union can be preserved only by the view presented in this volume,—i.e. that slavery is of God, and to continue for the good of the slave, the good of the master, the good of the whole American family, until another and better destiny may be unfolded. The one great idea, which I submit… is expressed in the speech…delivered in the General Assembly of the Presbyterian Church…I therein say: “Let us then, North and South, bring our minds to comprehend two ideas, and submit to their irresistible power. Let the Northern philanthropist learn from the Bible that the relation of master and slave is not sin per se. Let him learn that God says nowhere it is sin. Let him learn that sin is the transgression of the law; and where there is no law there is no sin, and that the Golden Rule may exist in the relations of slavery. Let him learn that slavery is simply an evil in certain circumstances. Let him learn that equality is only the highest form of social life; that subjection to authority, even slavery, may, in given conditions, be for a time better than freedom to the slave of any complexion. Let him learn that slavery, like all evils, has its corresponding and greater good; that the Southern slave, though degraded compared with his master, is elevated and ennobled compared with his brethren in Africa.”

Under Dred Scott v. Sandford the U.S. Supreme Court held African Americans were not American citizens and had no standing to sue in federal court. The court also held that the federal government had no authority to regulate slavery in the territories. Attached to these opinions is a report of the Joint Committee of the Senate and Assembly of New York appointed to “protect the constitutional rights of her citizens against the serious and alarming doctrines of the Supreme Court.” The committee was deeply critical of the court’s findings, reporting: 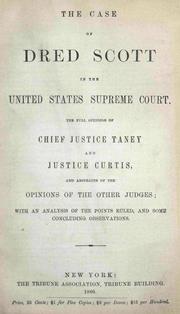 They could not fail to see that the sovereignty of our State, the constitutional rights of her citizens, the protection of her free labor, her great commercial, manufacturing and agricultural interests, her extensive educational system, and the morals of her citizens, were all assailed and put in jeopardy by the unconstitutional, sectional and Pro-Slavery doctrines announced by the majority of the Judges of the Supreme Court of the United States in the decision of the case mentioned; for those doctrines will bring slavery within our borders, against our will, with all its unhallowed, demoralizing and blighting influences.

Albion Winegar Tourgée, author of A Fool's Errand, by One of the Fools, was a Union soldier, prisoner of war, writer, politician, diplomat, and lawyer. He argued for Homer Plessy in Plessy v. Ferguson and has been credited with introducing the phrase “color-blind justice.” In A Fool’s Errand, Tourgée illustrated the numerous problems facing the South during Reconstruction.

William Lawrence Royall, author of this reply to Tourgée's work, was also a lawyer and soldier, in his case, of the Confederate Army. Royall worked as a journalist after the Civil War and “founded a daily newspaper…in a vain endeavor, along with the rest of the ‘rebel element’ there, to save my native State from the infamous brand of repudiation, which the Republicans and the scalawag native white population were seeking to put upon her.”

Royall prefaced his critique of A Fool’s Errand, in part, as follows: 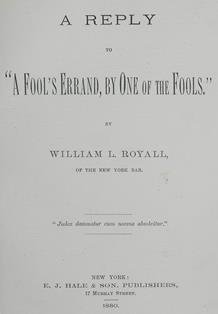 In the following pages I have endeavored to write the truth, and I have written it without regard to the matter of whom it may hurt. I have said some hard things, and I have not attempted to soften their native ruggedness by sugar coatings.

I look upon the book to which I have attempted a reply as a willful, deliberate and malicious libel upon a noble and generous people, amongst whom I was born and raised, and in full sympathy with whom I hope to live and die. I look upon its author as one of the most contemptible fellows of those who have libeled that people, and not at all less contemptible because highly endowed with intellect; but rather more so, because, with all the disposition towards groveling malice which a weaker man could have, he has yet far greater powers to injure, and he has deliberately used those powers to their full extent.

I have made no mealy-mouthed defence of the people of the South. It is not on bended knee and with cringing accent that, self-appointed advocate though I be, I have brought their cause before the world. I have attempted to speak for a race of whom the males are men, as I believe those men would have their race spoken for.