Franklin had a great opportunity to show his own interests during James’s long incarceration. Also while James was jailed, Franklin printed excerpts from “Cato’s Letters,” a periodical series by John Trenchard and Thomas Gordon that discussed personal liberty, civic duty, and political freedom. Franklin offered Thomas Gordon’s bold statement about freedom of conscience as a most “sacred privilege,” a privilege “essential to free government” from his Cato’s Letter of February 4, 1721. In this letter, Gordon aligned free speech with freedom of conscience. Benjamin Franklin evidently concurred. In his own Silence Dogood No. 8, published in the New-England Courant, July 9, 1722, he provided most of Gordon’s letter-essay, quoting the powerful opening, which essentially articulated the principles of freedom of speech, freedom of conscience, and freedom of the press: “Without Freedom of Thought, there can be no such Thing as Wisdom; and no such Thing as publick Liberty, without Freedom of Speech.” 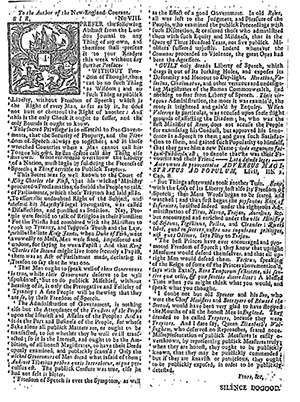 Franklin was fascinated by the writing of early modern liberals.[3] He wanted to use the New-England Courant to provide evidence of the more liberal early modern values in England, compared to New England. He used his Silence Dogood series to quote from Daniel Defoe’s Essay on Projects (establishing economic rationale for assisting widows and their families) and Sir William Petty’s series of pamphlets on “Political Arithmetick,” the study of populations, land use, and imperial productivity.[4] He became preoccupied with ideas about British freedoms and how early modern liberal values might be used to support British imperialism.

Young Benjamin Franklin was preoccupied with the British empire and ideas of Britons’ rights. We know this from his earliest work on James Franklin’s newspaper and then from what he published in his own Philadelphia newspaper, the Pennsylvania Gazette. His reading and printing activities provide evidence of Franklin’s concern, even as a young man, about issues in political subjectivity, imperial economic and population expansion, and the relationship between land mass and optimum population for production. All of these topics—and more—had been pursued by Petty, Defoe, Trenchard, Gordon, and many other early modern liberal writers Franklin admired. By looking into what Franklin read and what he printed, we gain a sense that from a very early age, Franklin was interested in early modern liberalism and in the connections among imperial goals, economic means, and land acquisition. From his earliest reading and writing, we know he had clear views about liberty, property, and freedom of expression. 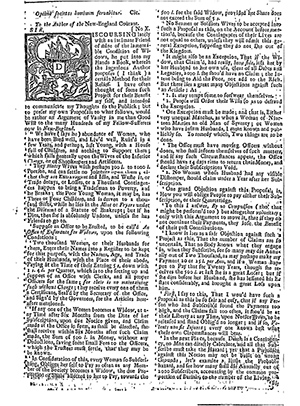 When he moved to Philadelphia and joined the printers’ world there, he began to circulate among learned men who were attracted to Franklin’s worldliness and his skills. As he had done in Boston, he developed friendships that would assist his project of self-learning. He joined the inner circle of leading Philadelphia Quakers, and he became close friends with the Proprietors’ agent, James Logan, who was in most ways the person who represented the key authority in Pennsylvania, the Proprietary governors (William Penn and his relatives). Logan’s immense library (over 3,000 volumes, a huge number of books at the time) was open to Franklin to peruse and borrow from; it contained some of the best reading in politics, natural philosophy, economics, history, and the classics.[5] Assisted by Logan, Franklin developed connections to build a political career, and he used his printshop to foster liberal attitudes and economic and civic pride in Philadelphia, which was becoming the most important seaport in the northern colonies. Franklin’s Pennsylvania Gazette regularly offered articles on the economic wellbeing of Britain’s North American colonies; scientific experiments being performed in Britain, Europe, and Philadelphia (including Franklin’s own experiments); imports and exports of British colonies; and political problems in England caused by Parliament. The newspaper would become an important vehicle for information-sharing during the war for empire in North America, and its articles were often reprinted in newspapers in other towns, due to Franklin’s vast network of connections among printers. Franklin readily understood the importance of having an informed citizenry, and he used his newspaper as a means for information on matters of economic, political, and cultural importance. In addition to articles, Franklin experimented with political cartoons and illustrative woodcuts. 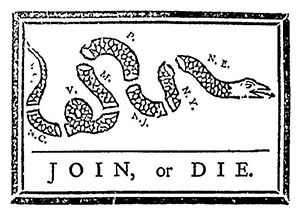 Franklin was also interested in extending printing networks throughout the Atlantic world. In this he was a pioneer, as Benedict Anderson once acknowledged.[6] He attempted to find a common readership and to develop common bonds among all Britain’s colonies with a new publication, the General Magazine, and Historical Chronicle, for all the British Plantations in America (vol. 1, January 1741). In the opening article, Franklin offered an “Account of the Export of Provisions from Philadelphia,” which listed the valuable goods entered for export between December 25, 1739, and December 25, 1740. His initial remarks about the “Fertility” of Pennsylvania led to an argument that an ability to provision an army would “give Great Britain a considerable Advantage over its Enemies in an American War, and will no doubt be an additional Inducement to our Mother Country to continue us its Protection.” 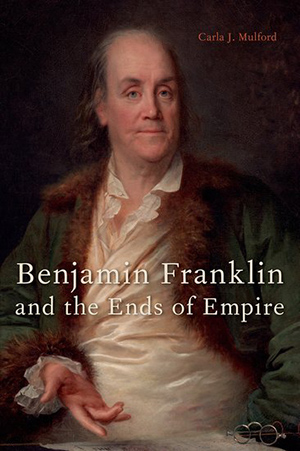 Unless we actually go back to the books and news media that Franklin himself read and back to copies of the newspapers he printed, we could with ease subscribe to the received opinion that Franklin was a pro-British Empire man until the middle 1770s. Reviewing the papers, broadsides, and pamphlets Franklin read and wrote enables us to see just how much of Franklin’s work comprised news reports on economic and imperial matters. By returning to Franklin’s newspapers and by thinking about Franklin in light of what he read and printed, I was able to begin to thinking about Franklin as an imperial theorist. My reading brought me to conceive of Franklin’s view of early modern liberalism in a new light: However much Franklin enjoyed thinking of the colonies as part of one “great” Britain, he recognized much earlier than most of his generation that the colonies had the population and productive capacity to go it alone—as a self-determining political entity—if necessary.

Most historians consider that Franklin was interested in becoming an imperial politician until the time in the early 1770s when he sent some stolen letters to representatives in Massachusetts, letters that revealed what many conceived to be the duplicity of the Massachusetts governors. For passing along personal letters that had been stolen—Franklin always refused to name who procured for him the letters—Franklin was taken to court and denounced in the cockpit by Alexander Wedderburn, a lawyer in the King’s court, in 1774. This denunciation is what has led many historians to assume Franklin had wished to remain an empire man until the 1770s. Yet back in the late 1740s and early 1750s, about twenty-five years before most historians have recognized, Franklin was thinking through what would happen to the colonies if a break from Britain occurred. We see this in his Albany Plan of Union and his letters to William Shirley of the 1750s, but we also see signs of such radical theorizing in his Pennsylvania Gazette and the General Magazine of the 1730s and 40s. Carefully reading Franklin’s readings and writings enabled me to see that Franklin was perhaps always delving into political theory about individual rights and the relationship among laboring peoples, their political rights, and the rights of sovereign and independent states, as I have attempted to reveal in my book, Benjamin Franklin and the Ends of Empire.

[2] James continued to run afoul of the authorities, who managed finally to shut the paper down in 1727. That year, James left Boston for Providence, R.I., and set up shop there with his wife, Ann.

[5] Logan’s friendship for Franklin was instrumentally important to Franklin’s life. Logan became Philadelphia’s mayor, a chief justice of the supreme court of Pennsylvania, and acting governor.

[6] Anderson called Franklin a “creole pioneer” for the range of printing efforts he engaged in across the Atlantic world. See Imagined Communities: Reflections on the Origin and Spread of Nationalism, new ed. (1983; London: Verso, 2006), 63.

Carla Mulford is Professor of English at the Pennsylvania State University and the founding president of the Society for Early Americanists. She is the author of Benjamin Franklin and the Ends of Empire (Oxford University Press, 2015) and over fifteen articles and book chapters on Franklin published between 1992 and the present. She edited The Cambridge Companion to Benjamin Franklin, published in 2009, and she is currently co-editing a collection of essays for Cambridge University Press called American Literature and the New Puritan Studies. Furthering her work on Franklin, she is now completing a monograph under the working title, Benjamin Franklin’s Electrical Diplomacy. She has served on the editorial boards of numerous journals, including American Literature, Early American Literature, and Early American Studies, and her research on Franklin has benefitted from fellowships offered by the National Endowment for the Humanities, the American Council of Learned Societies, and the Andrew W. Mellon Foundation.