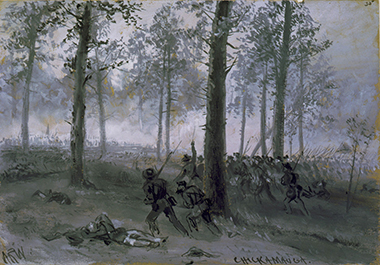 As with most battles, traditional accounts of Chickamauga generally mention the turn in the weather without delving too deeply into any wider context.  Drums and trumpets remain the focus. A half-century ago, Chickamauga historian Glenn Tucker did more than most authors when he suggested in a single footnote that almanacs from 1863 indicated that a wider Midwestern cold system was to blame.[2] Hoping to learn more about the Chickamauga cold snap for a book on Civil War weather, I not only consulted familiar soldier sources and Smithsonian weather records, but also delved deeply into the Readex Early American Newspapers series.  What I discovered in the newspapers was both startling and significant: a nearly forgotten yet devastating late summer cold weather system that not only chilled Chickamauga but damaged agriculture across the divided union. 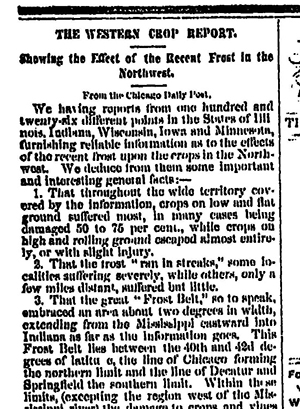 On August 30, the first of two extreme systems brought cold weather and killing frosts from Canada across the Midwest.  It destroyed a reported average of one-third of Midwestern buckwheat, corn, sorghum, and tobacco.  In Minnesota, ice 1/8-inch thick lay over fields and meadows.  The cold reached south into Kentucky, eastward into Ohio, and as far west as Kansas.  Some areas were harder hit than others.  The Chicago Daily Post’s editors contacted 126 correspondents across the Old Northwest.  Using that data, the editors described a “Frost Belt” that ran from the Mississippi River into Indiana.  Within that belt, frost killed half of all crops still in the field. North of the belt, about a quarter of the total crop was ruined.  The Department of Agriculture ultimately estimated that the August 30 frost destroyed 40 percent of crops in Indiana and 30 percent in Illinois, Michigan, and Minnesota.[3] 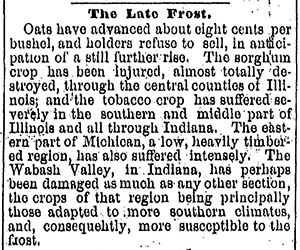 And it was a mere precursor of what was to follow.  The second, wider front barreled across the North toward Chickamauga in mid-September.  It brought dramatic temperature drops and black frost.  Sometimes called killing frosts, black frosts occur when the atmosphere lacks sufficient moisture to produce icy frost on surfaces.  Instead, the water inside leaves and stems freezes, killing the plant while darkening it.[4]. One can track the progress of the cold front and the black frost using newspaper accounts. In Wisconsin, frost wrecked what was left of the state corn crop.  In the Illinois “Frost Belt,” the new weather event finished off anything that survived August.  Near Louisville, heavy frost according to one report destroyed the three-quarters of the tobacco crop still in the field.  Prices soared overnight.  Corn and potatoes suffered widespread regional losses.  A Kentucky farmer described the event as unprecedented. Similar damage followed in Middle Tennessee, where a correspondent wrote that everything still in the field was ruined by the frost.  And at Chickamauga, soldiers’ teeth chattered in bleak darkness amid the pitiful screams of the wounded.[5] 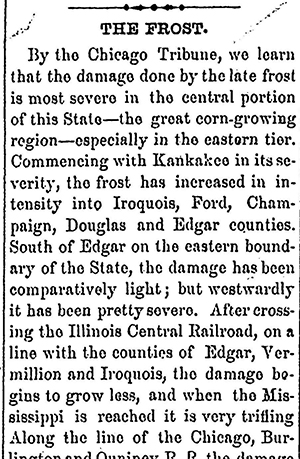 In the north, the effects of late summer drought and the twin late summer frosts became painfully evident in October when the new Department of Agriculture released a detailed report.  It soon reappeared with added commentary in the newspapers. Fall harvests of buckwheat, corn, and potatoes were worse that 1862 yields across the board.  Northern crop production in 1863 nonetheless remained robust enough to feed the populace and the army while allowing the exportation of millions of bushels of grain to foreign markets.  Only corn threatened to come up short on the coming winter.  The sheer magnitude of northern agriculture, editors concluded, still could absorb the worst of nature.[6] That was not true in the Confederacy, where two years of worse weather had crippled farming.  The mid-September cold and frost wave simply finished off an agricultural season already marred by heavy spring rains, blistering summer drought, and the friction of war—all carefully reported in southern papers.  Confederates began going hungry as autumn began.  Soldiers would soon suffer again as well, and not only from hunger.  The coldest days of the war still beckoned in early 1864. 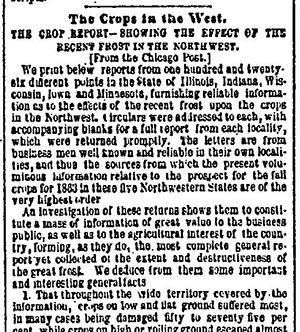