During the recent bicentennial of the War of 1812, historians revisited America’s second war of independence in a spate of books that detailed the conflict on land, at sea, through cause and effect, and various other angles. One fact remains—the War of 1812, which lasted for two-and-a-half years, is as controversial and misunderstood today as it was in 1814. Often called “Mr Madison’s war” and even “Mr Jefferson’s war,” the War of 1812 remains fertile ground for historical research and analysis. In one 1983 work on the evolution of American newspapers in the years leading up to the War of 1812, Donald R. Avery concluded the war was the pivotal event in the shift of newspaper coverage from foreign to domestic news. This brief study demonstrates—through use of the digital Early American Newspapers database—the validity of Avery’s thesis by examining coverage of one American war hero, during and after the War of 1812. 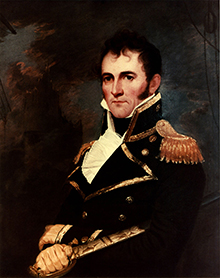 David Porter, Jr., was an American Navy officer who entered the Navy in 1798 and saw action in the Quasi-War with France and the Barbary Wars. When war was declared in 1812, Porter was promoted to captain in command of the USS Essex, a forty-six gun frigate. Porter has been the subject of military biographies but it is only through the eyes of contemporary newspaper coverage that his heroic and often exciting exploits can be best understood.

Captain Porter and the Essex were briefly noted in 1805 as part of the American naval squadron but beginning in September 1812 Porter’s forays against British ships were legendary in print.  In early July 1812 the Essex captured a British troopship in the Atlantic and over the next month added seven more prizes. On August 13 Porter took HMS Alert, a British sloop. Three New York newspapers reported Essex’s conquest including New York City’s The Statesman (September 17)—it took months for news from international waters (or anywhere for that matter) to reach the United States. 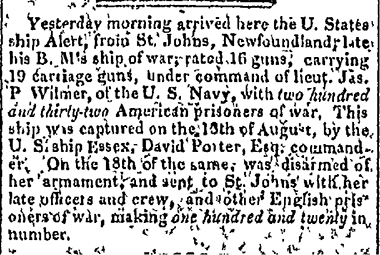 Coverage of the war was haphazard at best and usually reported only after official government reports arrived in the Capitol. Often news arrived in the form of letters to home by officers and enlisted men alike and found its way into the press. One enterprising New York editor (William L. Stone of Herkimer, NY) would meet the nightly stage seeking the latest war news. The public grew impatient for war reports and it was common for one newspaper to simply print copy from other papers verbatim. The Essex captured HMS Castor, a forty-four gun frigate off Jamaica after a two-hour battle resulting in 150 British casualties, again widely reported in the American press, including the Constitutionalist and Weekly Magazine (Exeter, NH) and The Washingtonian (Windsor, VT) in early 1813. 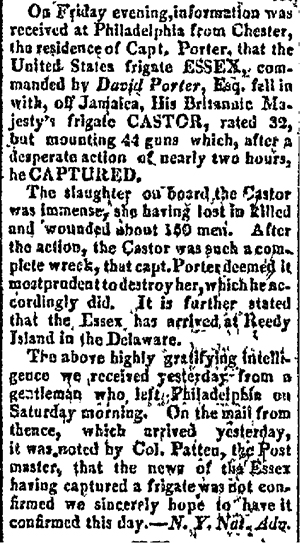 For over a year Porter and the Essex wreaked havoc on British shipping. In February 1813 the Essex rounded Cape Horn, the first American warship to sail into the Pacific. By March the Essex had captured a dozen British whalers and drew the attention of the entire British Navy. News of the Essex had captured the attention of the American nation at war. By December a letter from Porter to the Secretary of the Navy dated July 2 was printed and reprinted in dozens of papers across the eastern sea board from The War (NY) to Raleigh’s (NC) The Star to the Danbury Gazette (CT). 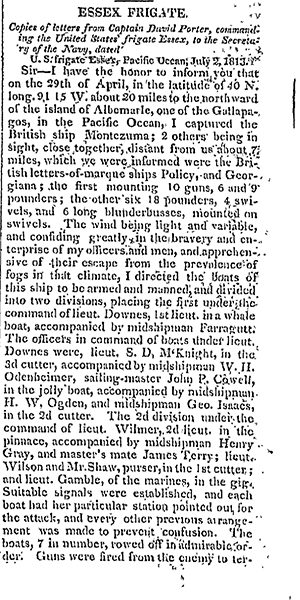 But the pivotal event of Porter’s career during the war was ironically a defeat at Valparaiso, Chile. Porter’s exploits in the Pacific drew the attention of the British Navy which set out to find and defeat the Essex. Leading the expedition were the British frigate Phoebe under the command of Captain James Hillyer. Two sloops joined the Phoebe and in late March 1814 encountered the Americans at Valparaiso, considered a neutral port. Fearing the arrival of additional British ships, Porter made a run for open seas on March 28, but ran into a squall. The Essex suffered damage to her topmast which left the ship at the mercy of British guns. In two and a half hours the Essex was devastated—over half of the crew of 250 were killed—and the Essex struck colors, surrendering the ship to the British. As a result Porter and his captured crew were later paroled to New York. Yet the loss of the Essex under Porter was hailed as a heroic event and reported in well over sixty newspapers in the United States.

The events were initially reported in the American press in early July 1814 (over three months after the battle) in various newspapers including the American and Commercial Daily Advertiser, Virginia Patriot, Merrimack Intelligencer, Federal Republican, Daily National Intelligencer, the Boston Spectator, and many more across the nation. Most papers simply printed Porter’s July 18th letter to the Secretary of the Navy. Between early July and the end of August a total of 65 newspapers carried some form of news on the battle of Valparaiso and Porter’s actions. Although Valparaiso was not the end of his navy career, Porter saw no further action during the war. He served in various administrative positions and later commanded American naval forces in the West Indies. After a dispute with the American Navy Porter briefly headed the Mexican navy and ended his career in the American diplomatic corps. He died in Turkey in March 1843. Again his career and naval exploits were celebrated in obituaries in the American press from April 20 to later September 1843, including the Richmond Whig, Baltimore Sun, Charleston Courier, and the Boston Courier, among nearly 30 newspapers reporting his death. Newspapers cited his courage, skills, patriotism, and “imperishable honor.” 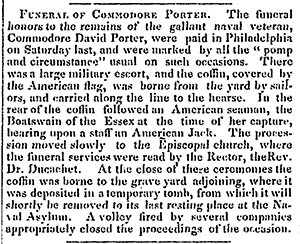 Later Porter’s birth date (February 1) was listed in various newspaper listings of “this day in history.”  Finally Porter was mentioned frequently in death notices for Admiral David Farragut in 1870—Farragut had been under Porter’s command on the Essex at Valparaiso.

Without access to Early American Newspapers, historians and other researchers would face a challenge few would attempt; however, online content permits me to conclude Avery’s premise of the shift to domestic coverage is well borne out through this case study on coverage of the life and times of Naval Captain David Porter.  Newspapers at the time of the War of 1812 were mostly weeklies, generally four pages in length and laden with advertisements and notices—significant news appeared on the first page.  War news did not dominate newspaper headlines during the war but it certainly was an important aspect of the genre.

Boyd Childress is a retired reference librarian from Auburn University.