The consumer behavior of 18th-century Americans has been well-documented in regard to tastes in clothing and furniture, the social acts of dining and tea drinking, and pursuits such as book buying. Benjamin Franklin, for example, records how he purchased a copy of The Pilgrim's Progress as a young man, then later sold it to buy Burton's Historical Collections from one of Boston's numerous booksellers. Yet in comparison to the study of early Americans' literary purchases, few efforts have attempted to understand how Americans acquired cartographic products, or what choices the market offered. My research has focused on determining the composition of the map trade, the vendors involved and the availability of their products, including maps, charts, atlases and globes.

Trade with England and Western Europe supplied many of the manufactured goods that populated the colonial American economy. Among those goods were prints, books and maps that appeared in prodigious numbers in American marketplaces. Several types of sources record the inventory and sale of maps, charts, atlases and globes. Account books and correspondence between merchants and their customers can be fruitful, albeit labor-intensive, avenues of inquiry in manuscript repositories. The printed catalogues of booksellers, only a handful of which include cartographic products, also offer a narrow window on the market. Far more numerous than those research staples—and now far more accessible—are early American newspapers. Advertisements and notices from newspapers provide indispensable documentation of the map trade, and America's Historical Newspapers, part of the Readex Archive of Americana, greatly facilitates the task of locating that evidence.

Unlike books, cartographic works were more often described than titled in advertisements. References to "maps of the Four Quarters" (the continents) or simply "maps" occur with far greater frequency than even an ambiguous title such as "correct map of Connecticut." By enabling full-text searching of advertisements, America's Historical Newspapers yields remarkable results when looking for products as elusive as anonymous maps and charts among the remarkably long listings of goods offered for sale by early American merchants.

Philadelphia merchant Joseph Beddome, for example, advertised numerous types of fabric, caps, cutlery, candlesticks, walking canes and unidentified maps. Those maps that can be identified show that the American map trade primarily consisted of more-or-less contemporary English products. Maps prepared by American colonists, but engraved and printed in London, represent a modest but important segment of the cartographic market, as do American-made maps. The sale of French, Dutch and German maps and atlases, and antiquarian works of various origins, also occurred, but these account for a minor portion of the trade.

Newspapers often afford the only documentation of the many "vendues" or auctions run by booksellers and merchants. The earliest known American auction in which maps were sold occurred in 1714, when Boston merchant Stephen Labbe advertised a sale of general merchandise at the Crown Coffee House, including "maps and prints in gilt frames."

Philadelphia publisher and bookseller Robert Bell ran auctions in towns stretching from Boston to Charleston, South Carolina. In 1768, he announced a book auction in New York City that featured "a very valuable and large collection of modern maps, plans, charts, &c." Most of the items are listed generically: maps of North America, plans of the River St. Lawrence, charts of South America. Lewis Evans' A General Map of the Middle British Colonies in America (Philadelphia, 1755) and Thomas Jefferys' An Authentic Plan of the Town and Harbour of Cap-Francois in the Isle of St. Domingo (London, 1760) can, however, be ascertained from the advertisement.

Beyond helping to determine the scope of the map supply in early America, advertisements also reveal the diversity of the map trade. A close connection between applied mathematics and cartography frequently led the makers of mathematical instruments, such as compasses and quadrants, to trade in maps and charts. In 1771, William Williams advertised a list of goods available at his shop on Boston's Long Wharf. Along with surveying instruments and perspective glasses (i.e., "spy" glasses), Williams sold "Quarter Waggoners," a contemporary name for an atlas of sea charts properly titled The English Pilot, Fourth Book, Describing the West-India Navigation. 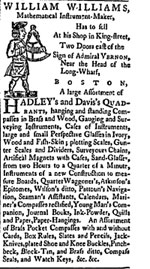 Ship chandlers also supplied the needs of mariners, including charts. Others with occupations seemingly unrelated to maps or mapmaking became cartographic vendors—at least temporarily. In 18th-century America, maps, charts, atlases and globes could be purchased from a variety of merchandisers, ranging from apothecaries and bakers to pewterers and tavern keepers.

The history of the American map trade is closely linked with the development of the 18th-century American book trade. Early in the century, general merchants often retailed both books and maps before more specialized booksellers became ensconced, a situation particularly true for locations in the middle colonies and the South. Individuals involved in the print trades, such as printers, engravers and binders, often carried an assortment of books, and occasionally maps. Without question, booksellers placed the greatest number of advertisements listing maps. Those newspaper notices furnish much of the raw data with which to reconstitute the cartographic marketplace in early America.