Every Leaf a Panacea? Health and Wellness in 19th-Century American Pamphlets 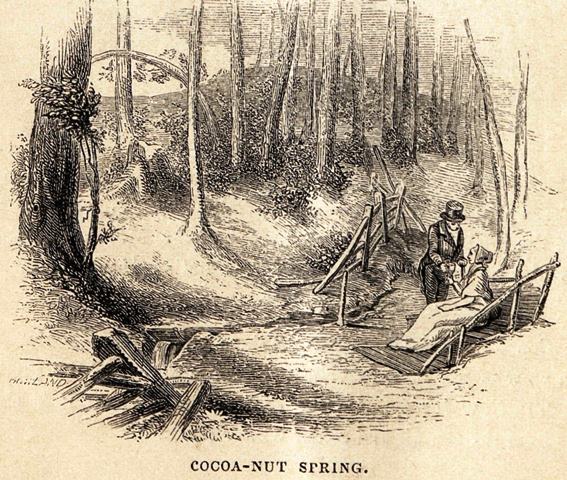 The latest recent release of American Pamphlets, Series 1, 1820-1922, includes many publications concerning health and treatments for a host of physical and mental complaints. Some of these pamphlets are almost 200 years old and yet they seem almost current in their concerns and causes, if not in their use of language, to contemporary American life. Cautions to Young Persons Concerning Health, in a Public Lecture Delivered at the Close of the Medical Course in the Chapel at Cambridge,  November 20, 1804; Containing the General Doctrine of Dyspepsia and Chronic Diseases; Shewing the Evil Tendency of the use of Tobacco upon Young Persons; More Especially the Pernicious Effects of Smoking Cigars. With Observations on the Use of Ardent and Vinous Spirits. By Benjamin Waterhouse, M.D., Professor of the Theory and Practice of Physic, and Lecturer on Natural History in the University of Cambridge, New England (1822)

The lengthy title above nearly says it all. The professor was somewhat more terse; the title on his first page is simply “A public lecture on the pernicious effects of smoking cigars.” He quotes a wise ancient who said, “God sends acute diseases, but chronic disorders we create ourselves.” Included in Dr. Waterhouse's assignments to chronic diseases are depraved appetite, gout, apoplexy, palsy, and “the long and gloomy train of nervous disorders.” The lecture takes a wide inventory of human behavior and illness. The author believes that dyspepsia is the essence of self-imposed illness and opens the floodgates to a host of other complaints. While some of the medical terms and certainties seem quaint two centuries later, it is striking how modern some of the advice for healthier living is today. It may be worth noting that Dr. Waterhouse lived to age 92. 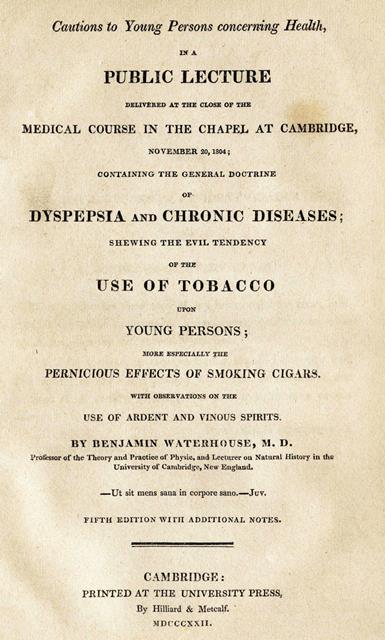 This pamphlet consists largely of enthusiastic testimonies to the efficacy of Mr. and Mrs. Chapman's therapy. They claim that Mr. Chapman suffered a severe stammer for 28 years before developing the technique that cured him and with which he has since cured many others. The Chapman’s have kept their methods a secret, and patients are enjoined from any revelations. 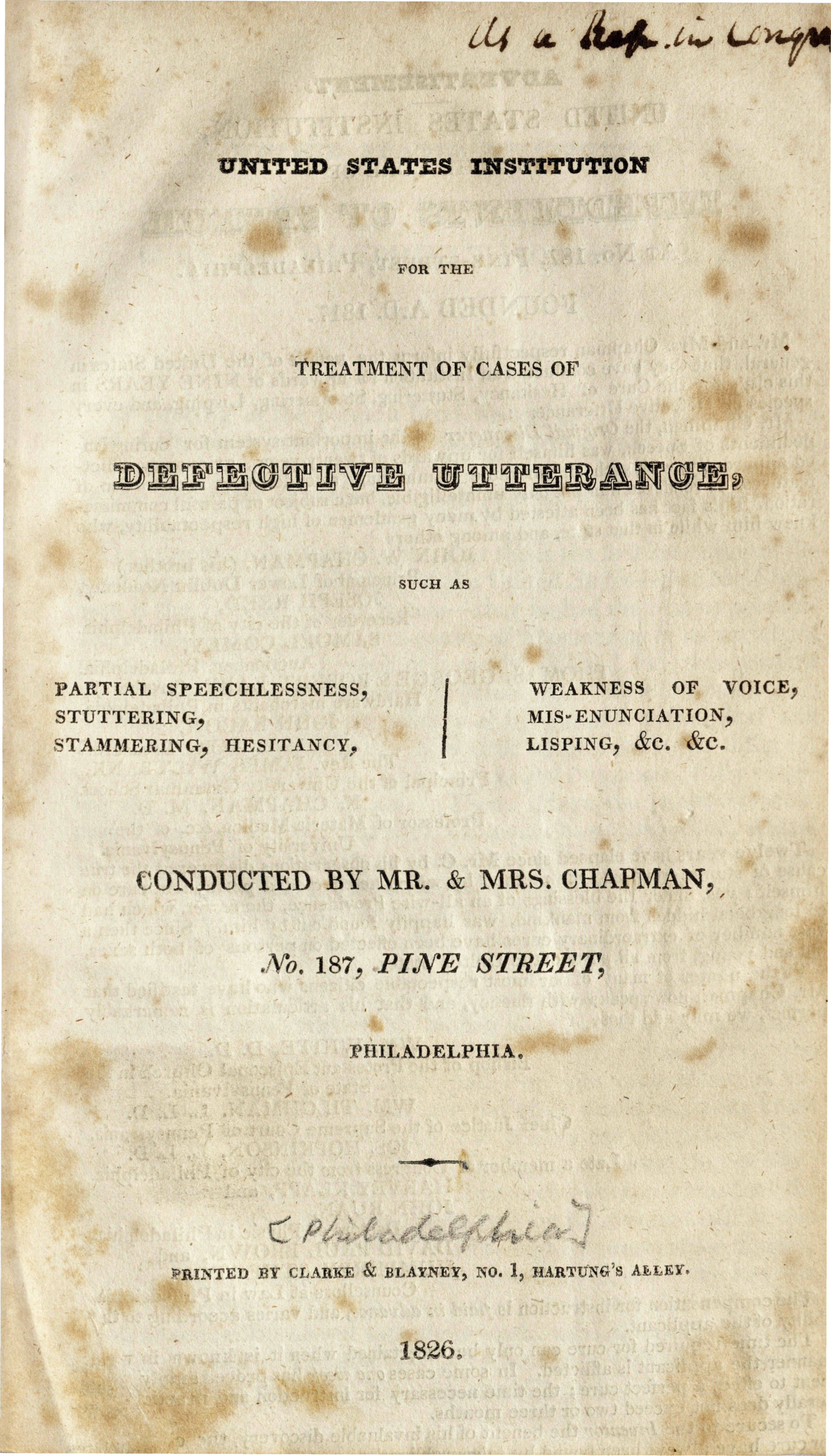 An Address, Delivered before the Greene County Medical Society, May 5, 1830 Together with Resolutions Adopted by the Society by E. Pierce, M.D., President of the Society (1855)

Dr. Pierce expresses his dismay concerning the revision of a law enacted by the New York State legislature concerning the “prescription” of herbal remedies for human illnesses by unlicensed practitioners. He is clearly incensed that while the amended act maintains substantial fines and possible jail time, the amendment goes on to exempt any “roots, barks or herbs, the growth or produce of the United States.” He wonders if this country is “so highly favoured by Heaven that every leaf is a panacea and every root a catholicon?” While sometimes scathing in his remarks, the doctor is absolutely serious in his antipathy to the laws' revisions. As with tobacco use, the issue of unregulated dispensation of herbal remedies is still a lively issue in the 21st century. 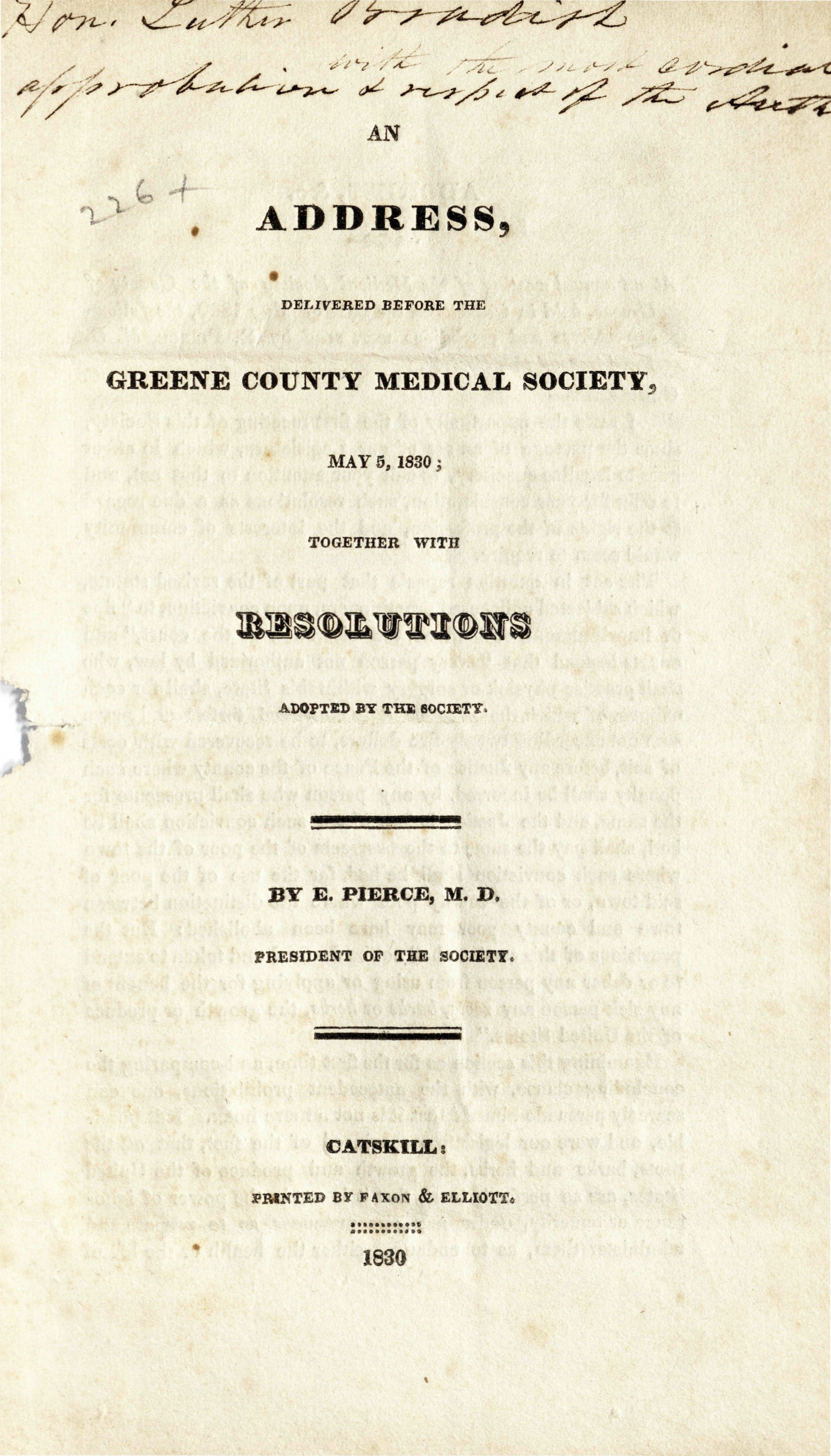 Medical Science and Common Sense. A Lecture Introductory to the Session 1858-59 of the St. Louis Medical College by M.L. Linton, M.D., Professor of the Theory and Practice of Medicine (1859)

In this lecture Dr. Linton dissects various forms of medical treatment that fall outside of mainstream belief and practice. He promotes common sense and asserts that as much as 90% of human ailments will resolve themselves without intervention. He excoriates hydropaths, electro-paths and other practitioners of alternative therapies, but saves his greatest disdain for homeopaths “because [it] is the dominant medical delusion of the day, I notice it on the present occasion - not on account of its merits. It is a tissue of absurdity and contradiction from beginning to end.” Those are fighting words and he isn't done. 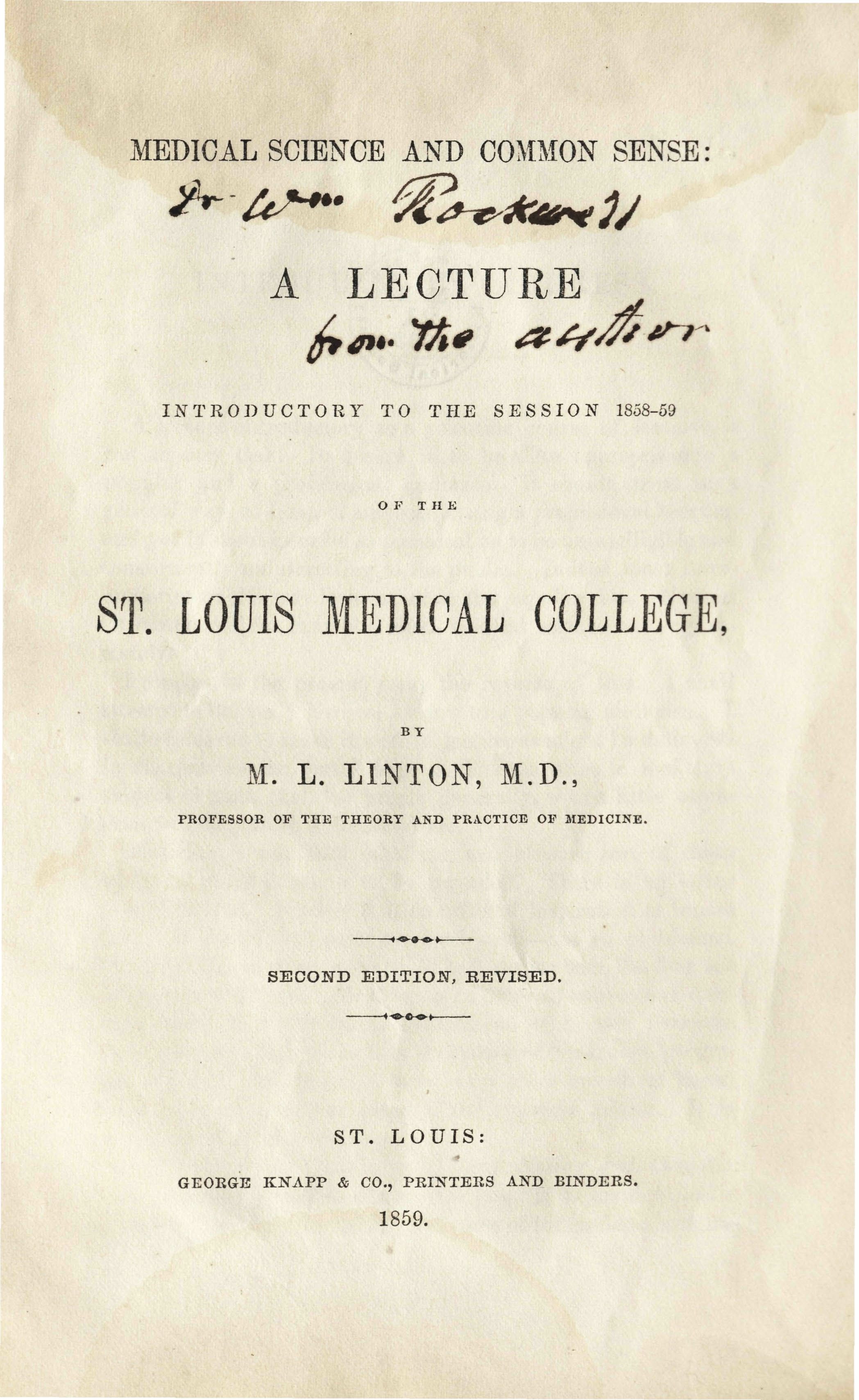 Extracts from Sir E. Lytton Bulwer's Confessions and Observations of a Water Patient in a Letter to the New Monthly Magazine to which is Appended a Description of the Orange Mountain Water Cure (1851)

And, just for fun, we include an account of seeking a water cure as experienced by a prominent English Victorian aristocrat. Bulwer-Lytton’s name lives on for many because of the eponymous Bulwer-Lytton Fiction Contest in which entrants vie to submit the most awful openings for unwritten novels. This because he once began one of his novels with “It was a dark and stormy night...” Water cures were very popular in the mid-nineteenth century. It was held that by bathing in and imbibing certain waters many of the patient's complaints would be mitigated. The cures usually were resort-like and offered pleasant vistas, charming nature walks, and special diets. Perhaps our contemporary equivalents are spas. 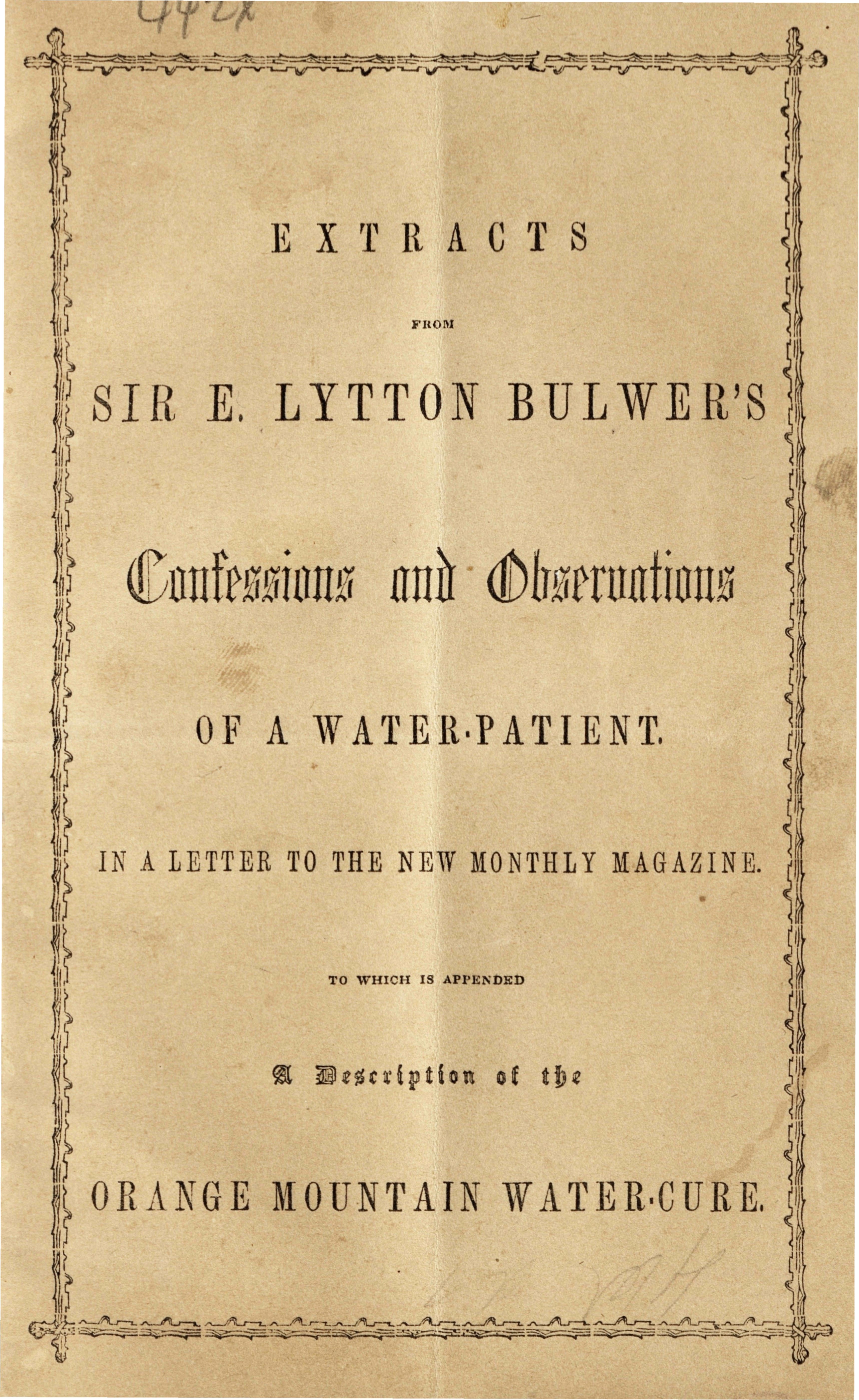 For more information about American Pamphlets, Series 1, 1820-1922: From the New-York Historical Society, or to request a trial for your institution, please contact readexmarketing@readex.com.