Here there be monsters, OR The Gloucester Serpent!

“Report of a committee of the Linnæan Society of New England relative to a large marine animal, supposed to be a serpent, seen near Cape Ann, Massachusetts, in August, 1817.” From Early American Imprints, Series II.

Upon opening your copy of The Salem Gazette on New Year’s Day, 1818, your continued patronage would have been solicited with a page in verse which included the following:

Of the Sea Serpent much is said, That lately here a visit made, But still avoided our caresses, Occasioning full many guesses, As on what errand he appear’d, And to the southward why he steer’d While naturalists their noddles vex, Trying to ascertain its sex.

For indeed, in August 1817 an unusual marine creature took up residence in the nearby harbor at Gloucester, Massachusetts. Over the course of several years, the serpent would range from the coast of Maine to Long Island Sound, leaving both credulity and derision in its wake.

An early notice of this particular apparition is found in the Newburyport Herald, Commercial and Country Gazette on August 19, 1817: 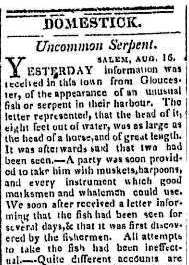 Yesterday information was received in this town from Gloucester, of the appearance of an unusual fish or serpent in their harbour. The letter represented, that the head of it, eight feet out of water, was as large as the head of a horse, and of great length. It was afterwards said that two had been seen.—A party was soon provided to take him with muskets, harpoons, and every instrument which good marksmen and whalemen could use. We soon after received a letter informing that the fish had been seen for several days, & that it was first discovered by the fishermen. All attempts to take the fish had been ineffectual...

Since the beast could not easily be killed, it was adopted by some as an exotic pet and viewed as providential for the number of herring which attended it, although many still wanted to slay this alleged aquatic dragon:

Our Sea Serpent, as he is called, is still near our shores. We have been told that he has actually received herrings when offered to him. We have been promised a view of him as he appears when at his ease upon the water. Whether he will be taken remains doubtful. The only hope seems to be from some powerful wound, which he might receive from a discharge of small shot, whether from musquetry or a cannon...

Others remained doubtful of the entire affair. A New York paper, The National Advocate, published a satirical letter from “Nicodemus Nantucket” who described being swallowed like the biblical Jonah, and from whom a bottle had been found with notes detailing among other adventures his impending nuptials with a mermaid styled “my dear Swimberrella:”

…but which we found to be nothing but mermaids, This is the eighth time we have mistaken them in the same way. Snorter, as my mate calls him, only swallowed five of them. I have saved two, a beautiful young mermaid, about sixteen years’ old, and her father, as I take him to be. If I can get his consent, and the deacon of our town will marry us, I will marry her in spite of her tail, for I shall be rich enough to ride in a carriage with her. Poor thing, she can only walk upon her hands; she is now looking over my shoulder weeping and wiping her eyes with her long green hair...

The response to such skepticism was swift (for the time) and to the point:

Our good neighbours of Gloucester, will not suffer themselves to be ridiculed. All who are acquainted at Gloucester, know the high credibility of the first witnesses respecting the appearance of the Sea Serpent, and the list of witnesses lately added, are worthy of the same respectful notice as the first. The people of the place are not known for credulity, are not without the greatest experience in marine affairs, and have not derived their accounts from each other. Many have seen the appearance they describe without any prepossession whatever. We however attribute the reception which the report has had, to the singular circumstance that men of so great enterprise in every thing else should have failed of taking the thing of so very extraordinary an appearance.

For their part, the skeptics were just getting started. In 1819 there would even be a three-act play titled “The Sea serpent, or, Gloucester hoax dramatic jeu d'esprit, in three acts.” 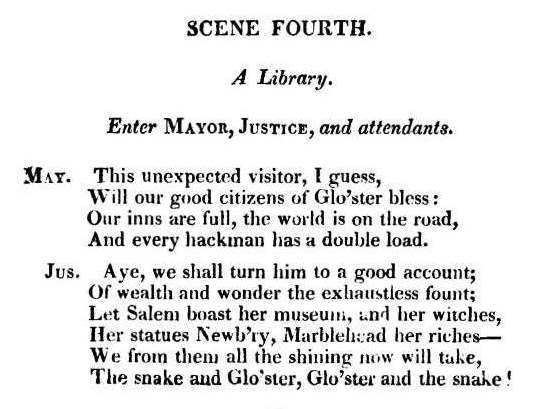 Among the ways discovered to make money from “the snake,” one stands out as inimical to its very existence:

HALL’S’ PATENT RIFLE; An Instrument that will kill the Sea Monster. PORTLAND, Aug. 26—In consequence of suggestions that the Sea-Monster now on our coast is impenetrable by a leaden ball, experiments have been made with one of Capt. Hall’s patent rifles, to ascertain what degree of resistance would be necessary to stop a ball fired from one of them...

No spectacle could be complete without a publicity campaign, so a monumental oil painting was produced and taken on tour: 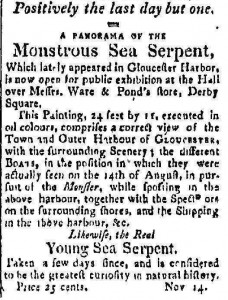 Positively the last day but one.

A panorama of the Monstrous Sea Serpent,

Which lately appeared in Gloucester Harbor, is now open for public exhibition at the Hall over Messrs. Ware & Pond’s store, Derby Square.

This Painting, 24 feet by 11, executed in oil colours, comprises a correct view of the Town and Outer Harbour of Gloucester, with the surrounding Scenery; the different Boats, in the position in which they were actually seen on the 14th of August, in pursuit of the Monster, while sporting in the above harbour, together with the Spect[at]ors on the surrounding shores, and the Shipping in the above harbour, &c.

Taken a few days since, and is considered to be the greatest curiosity in natural history. Price 25 cents. Nov. 14

“The greatest curiosity in natural history” naturally needed a Latin name, a society sponsor, and an encyclopedia entry attesting to its preeminence: 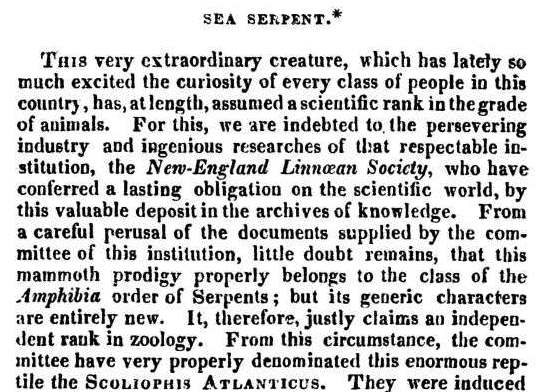 “A dictionary of the most uncommon wonders of the works of art and nature particularly of those which are most remarkable in America compiled from the most authentic authors, and comprising the most curious and extensive collection of the kind ever published by James Hardie.” Click to open. (From Early American Imprints, Series II)

Essex Patriot; May 16, 1818. Click to open. (From America’s Historical Newspapers)

Respectable persons swore the beast was quite real:

AFFIDAVIT. I, Joseph Woodward, master of the Sch. Adamant, of Hingham, on my passage from Penobscot to Hingham, on Saturday last, at 2 o’clock P.M. Agementicus bearing W.N.W. ten leagues distance, discovered something on the surface of the water apparently about the size of a ship’s long boat. Supposing it to be the wreck of some vessel, I made towards it; and on approaching it, to my surprise and that of my crew, discovered it to be a monstrous Sea Serpent—as we approached him, he threw himself into a coil & darted himself forward with amazing velocity—the wind being ahead, it became necessary to stand on the other tack, and as we approached him again, he threw himself into a coil as before, and came across our bows at not more than 60 feet distance....

And perhaps the beast was real. For when we turn from the popular press to the annual report of the Board of Regents of the Smithsonian Institution for the year ending June 30, 1916, in an article by Paul Bartsch, Curator of Marine Invertebrates, U.S. National Museum, we find numerous points in favor of such phenomena. As a naturalist likely qualified in the sexing of serpents, he proposed the following:

“Pirates of the deep: Stories of the squid and octopus.” (From the U.S. Congressional Serial Set)

And he was not alone in taking the public reports as largely credible. A survey of such sightings, which includes the Gloucester monster, appears in the New York Herald in 1895 under the headline, “Sea Serpent Is No Myth”: 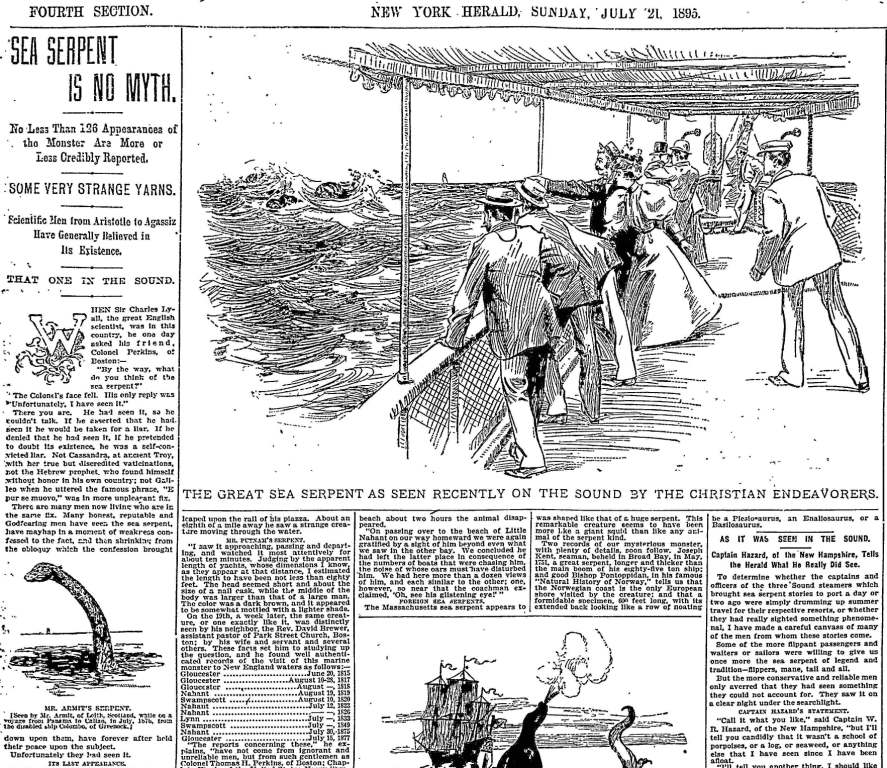 Even The Royal Society was intrigued: 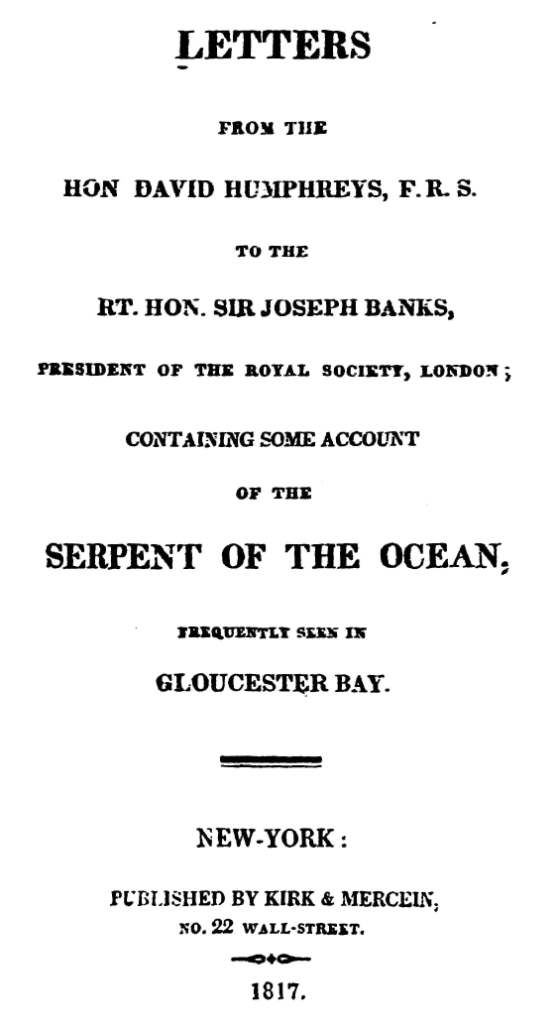 Of course, the giant squid as a conception of the naturalist may lack the drama of a ship encountering the denizens of popular imagination: 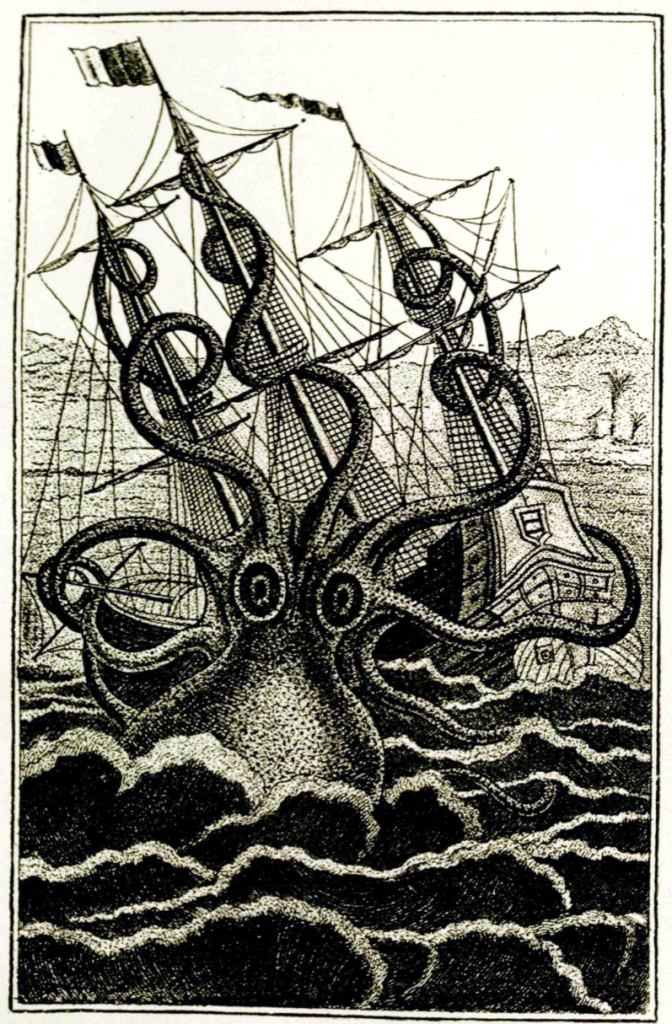 “Pirates of the deep: Stories of the squid and octopus” (From the U.S. Congressional Serial Set.)

The scholarly literature is silent on whether “Swimberrella” lived happily ever after with her chronicler, but the evidence appears conclusive that the Readex Archive of Americana brings science and sensation equally to life, enabling us to see “the sea serpent as he really is.” 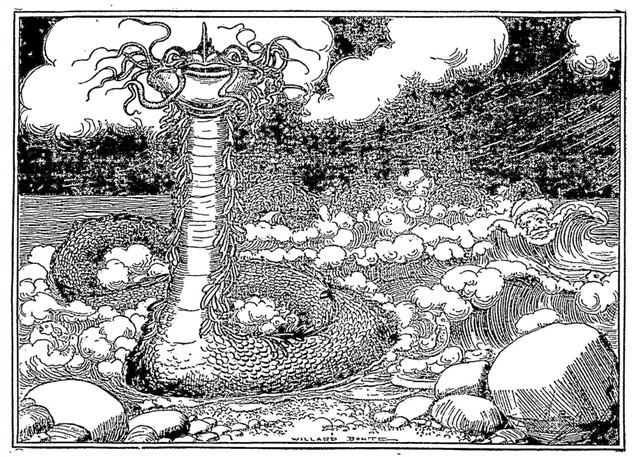