This most recent release of American Pamphlets is distinctively rich in material relating to education, including curricula, student registers, and the accommodations offered by secondary schools and colleges. There are also publications about educating children of emancipated slaves, children with physical or mental impairment, children beset by poverty or orphanhood, and children too young for elementary school. 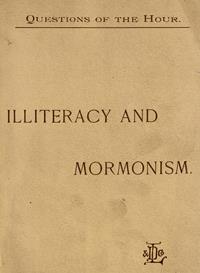 Illiteracy and Mormonism: A Discussion of Federal Aid to Education and the Utah Problem (1885)
By Henry Randall Waite
The author of this report is described as "Statistician Tenth U.S. Census in charge of inquiries relating to Education, Illiteracy, etc." He was also the Secretary of the Interstate Commission on Federal Aid to Education. In the current era of No Child Left Behind and Common Core Standards, it may be instructive to compare our contemporary views of federal aid to education with those of the late 19th century. The table of contents of this 1885 pamphlet indicates issues at hand, including regionalism, race, religion, and immigration. 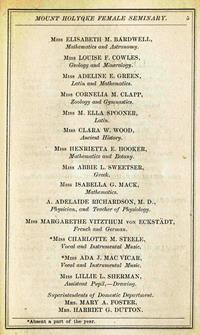 Forty-Third Annual Catalogue of the Mount Holyoke Female Seminary, in South Hadley, Mass. 1879-80
This pamphlet is an example of many such reports in this digital collection. Mount Holyoke is the oldest of the women’s colleges known traditionally as the Seven Sisters. These institutions were groundbreaking in their provision of rigorous curricula for their female students. In this publication, a list of Mount Holyoke teachers and their academic disciplines indicates instruction in such fields as mathematics, botany, chemistry, Latin, and ancient and modern history. Bible studies were also an integral requirement in each semester's curriculum. Listed here as well are the Mount Holyoke trustees (all male) and faculty (all female). 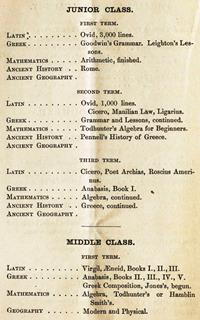 A Catalogue of the Officers and Students of Phillips Exeter Academy for the Academical Year, 1874-1875
In contrast to the Mount Holyoke catalogue described above, this publication from one of the oldest American private schools for boys lists a smaller faculty and more limited curricula, perhaps as befitted secondary-level education. The emphasis was on Latin, Greek, ancient history, ancient geography, and mathematics. It does not appear that religion was as important as it was at Mount Holyoke. At Phillips Exeter the requirement was weekly attendance at the church of the student's parents’ choice, while at Mount Holyoke students were required to be on campus every Sabbath and to receive no visitors lest they be distracted from the meaning of the day. 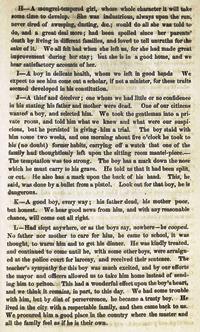 Second Annual Report of the Superintendent of the Cleveland Industrial School, and Children's Aid Society, for the year 1858...
Mount Holyoke and Phillips Exeter provided education for the children of the relatively privileged. But in the 19th century there were a large number of impoverished and orphaned children. Many religious and secular charities strove to provide them with food, shelter and education, often vocational. This annual report from the Cleveland Industrial School is an example of what such institutions provided. The term "ragged schools," which originated in Great Britain, is sometimes used to describe them.

Kindergarten Education (1904)
By Susan E. Blow
This early 20th-century pamphlet explores the history of the movement to establish preschool education in the United States. The model proposed by American advocates of early childhood education was largely influenced by the work of the German Friedrich Froebell. He had created the first kindergarten in 1840. The author traces his influence in the U.S. beginning about 1860 in Boston and spreading across the country.

For more information about American Pamphlets, 1820-1922: From the New-York Historical Society, or to request a trial for your institution, please contact readexmarketing@readex.com.