From Student Researcher to Careful Scholar: Tips from a Lexicographer
Grant Barrett

On the heels of the release of his second report, John C. Frémont was sent out again to map a better route through the Sierras to California. This time he took with him 60 well armed men and perhaps secret orders to act as he thought best if hostilities with Mexico seemed imminent.

This third expedition, his final government-sponsored expedition of exploration, quickly segued into the Bear Flag Revolt, which he essentially instigated and led. At its successful conclusion he was appointed Provisional Governor of California by the American commander on the spot, Commodore Stockton of the U.S. Navy, but eventually fell prey to a jurisdictional dispute between the Army and the Navy. In August 1847 he was taken into custody by one-time friend, now bitter enemy, General Stephen Watts Kearny and taken back to Washington under arrest to await court martial in the fall of that year.

In January 1848, despite a valiant and vigorous defense, Fremont was found guilty of mutiny, refusing a lawful command, and conduct prejudicial to military discipline. He was ordered dismissed from the service. President Polk rescinded the punishment, but declined to overturn the conviction itself. Feeling ill treated, Fremont resigned his commission in protest.

It is interesting to note that all of the related court martial materials, none of which were congressional in nature, appear in the U.S. Congressional Serial Set because the President collected them and submitted them to Congress in the form of a message (S.Exec.Doc. 33, 30-1). This is a reflection both of the importance of the underlying issues and Fremont's continued popularity in Congress and among the public.

While Fremont was in California, his cartographer Preuss was engaged by the Senate to produce a more detailed map of the Oregon Trail based on the records of the first and second expeditions. This map was reproduced over and over again in private editions and is said to have accompanied many wagon trains west. It languished for a while but was eventually printed in the form of a seven-sheet "atlas" as part of a report on canal and railroad projects (H.Rpt. 145, 30-2). Each sheet contained detailed notes based on Fremont's journal as to where water and firewood could be found for each night on the trail.

While Fremont was back in Washington preparing his court martial defense, he and Preuss were engaged by friends in the Senate to prepare yet another map and accompanying report, a report this time based on all three expeditions. Preuss's 1848 map is the first great map of the West and remains the standard until Gouvenor Warren's map of 1859. This geographical memoir (S.Misc.Doc. 148, 30-1) is terser and less well written than the previous two, but perhaps better science. All three publications contain expensive notes on geology and flora and fauna as well as tables of astronomical observations, but this report, although the shortest, seems the driest and most scientific in character.

Once out of the military Fremont and the family settled in California. He bought land on which extensive gold deposits were later discovered. For the next twenty years he was a very rich man.

We see him in the Serial Set in the 1850s only slightly. He is in the Senate Journal for the 31st Congress, Second Session, when he briefly served as a Senator from California. He was one of the first two men elected to the Senate when California became a state, but he drew the short straw and got the short term, which in his case turned out effectively to be only about three weeks. Due to the temporary power of a pro-slavery faction in Sacramento, he was not re-elected.

There are also a couple of reports related to claims he filed for expenses incurred during the Mexican War and for cattle provided to Indians on behalf of U.S. Indian Commissioners. During this period he undertook two privately funded expeditions to locate all-weather passes through the western mountains suitable for railroads. Both took place in the winter, both were disasters. Men died on both expeditions. A brief account of one appears in a Senate document in the form of a letter reprinted from a newspaper (H.Misc.Doc. 8, 33-2).

His presidential campaign of 1856 goes unmarked in Congressional publications. When another anti-slavery Republican was elected president in 1860, there was secession and Civil War and Fremont was called to arms. He displayed some talent, but not greatness and his ego and lack of tact soon had him at odds with Lincoln. After a series of mixed successes, Lincoln maneuvered him into a position where he felt compelled to resign his command.

The last third of his life was spent in declining fortunes and decreasing fame. Railroad speculation costs him his fortune in the early 1870s and he largely disappears from the Serial Set. Some friends secure for him appointment as Territorial Governor of Arizona, but the expenses associated with the office are almost as great as the salary. The family was largely supported by Jessie's writing.

Near the end of his life he was able to secure a reappointment as Major General on the retired list with a pension of $6,000/year, but he died within months of the final action on the pension (H.Rpt. 77, 51-1).

In 1898, eight years after his death, a set of nine commemorative stamps were issued to mark the opening of the Trans-Mississippi Exposition in Omaha, Nebraska. For the most part, the stamps portrayed generic images of the opening of the West: a cavalry patrol, homesteaders, Native Americans, cattle and buffalo. The only individual American represented was John C. Fremont raising his flag atop the highest peak in the Rockies. It wasn't Lewis and Clark or Custer or Buffalo Bill who was represented as the personal embodiment of westward expansion; it was Fremont. 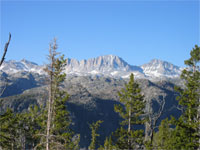 It isn't important that his mountain top wasn't actually the highest peak in the Rockies as he thought, or that it wasn't even the highest peak in the immediate vicinity. He didn't find paths, and Preuss was a better mapmaker, and everybody was a better general, and he almost certainly wouldn't have been a very good president, but his expeditions closed the era of Western exploration that began with Lewis and Clark. He was followed not by just by fur trappers and other explorers, but by settlers. Senator Benton predicted, "Cities will grow in the ashes of his campfires," and so it happened.

He described the West in a way that made all of us want to go west, not just the bravest and most adventuresome of us, but all of us and we were going to take the wife and the kids with us because it was possible, not necessarily easy, but possible. It would be a great adventure and the land at the end of the trip was a marvel. Lewis and Clark didn't prompt us to go West, and Zebulon Pike and Stephen Long spoke of a great American desert between the Missouri and the mountains. Migration west was only the thinnest trickle until Fremont told us about its wonders. And he did that in congressional publications, and they are digitally available today.