Gun-barrel Censorship of a Crusading Editor: Southern Honor, at War with Freedom of the Press
James L. Underwood

Gun-barrel Censorship of a Crusading Editor: Southern Honor, at War with Freedom of the Press 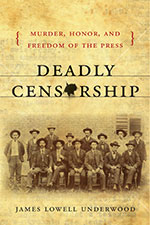 On January 15, 1903, a little before 2 pm, South Carolina Lieutenant Governor James H. Tillman shot N. G. Gonzales, the unarmed editor of The State newspaper. The shooting occurred in Columbia, South Carolina, on the northeast corner of Main and Gervais Streets across from the State House, the bustling intersection of local business and politics. Gonzales had been on his way home to lunch. Tillman had just adjourned the state senate over which he presided, and walked out of the capitol accompanied by two unsuspecting state senators, George W. Brown and Thomas Talbird, who joined him for what they thought would be a pleasant stroll back to their hotel. The corner on which the shooting took place housed a clamorous streetcar transfer station, guaranteeing that there were many witnesses. 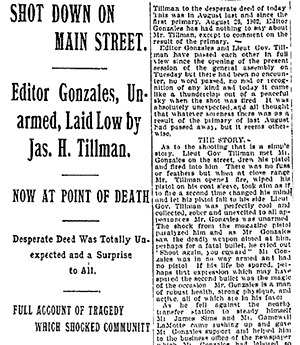 Tillman was arrested as he fled the crime scene. He admitted to the arresting officer that he had shot Gonzales. Tillman reluctantly surrendered his Luger pistol to the officer; a second pistol was found on him at the jail, where he was treated more like an honored guest than a prisoner. Gonzalez died four days later on January 19, 1903, despite emergency surgery. An autopsy and inquest found that Gonzales died of peritonitis (blood poisoning) because of the gunshot wound inflicted by James K. Tillman. Tillman was denied bail and indicted for murder. 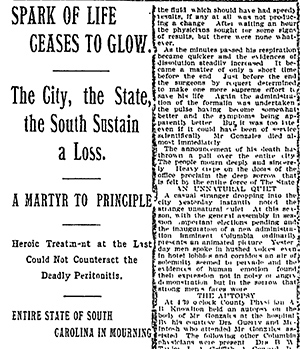 Why did this tragedy happen? Tillman blamed Gonzales’s stinging editorials for his humiliating fourth-place finish in the 1902 Democratic Gubernatorial Primary. He claimed Gonzales had repeatedly pelted him with accusations that he was a liar, a coward, a drunk, and a gambler. Tillman also claimed Gonzales had made innuendoes that he had abused his wife.

The two men had been quarrelling for at least the thirteen years since Jim Tillman had called Gonzales a “wily Spaniard” in an anonymous newspaper article. That article had attacked Gonzales for his scathing criticism of a speech given by Jim Tillman’s uncle Ben Tillman, who later became governor and United States senator, and earned the title “Pitchfork Ben” when he said he would use that implement on President Grover Cleveland’s posterior.

The key to understanding the case is the Southern concept of honor which prevailed at that time. To be respected in the community, an aspiring leader had to project an image of virile courage and veracity. Tillman thought Gonzales had publicly torn the raiment of honor from him.

When one’s honor was ridiculed, the harm could not be redressed by countering harsh words with harsh words, or by running to court and suing the transgressor. Such a course would have been unmanly, against tradition. You had to defend your honor in a direct physical fashion. The gentlemanly ritual of dueling had been replaced by coarser means of redress.

Gonzales also had a prickly sense of honor. He bridled when called a “wily” or “treacherous Spaniard,” believing that this labelled him as someone who was not quite Southern enough, because, while on his mother’s side he came from the aristocratic Elliott family, his father was a Cuban revolutionary general. Both Tillman and Gonzales had been involved in violence in the past, but before that fatal day had fought each other with words. After Tillman’s election loss, Gonzales sheathed his editorial sword and halted attacks on Jim Tillman. But Tillman’s anger smoldered and then flared in the shooting. 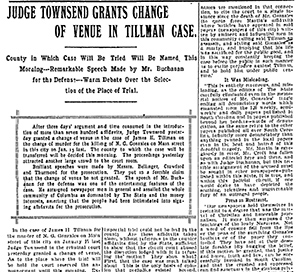 The dramatic trial would involve a bruising clash between highly prized values: the prosecution championed the sanctity of human life and freedom of the press, and the defense advocated the need to protect the Southern concept of honor from abuse by a licentious press. The trial was preceded by an intricate chess game of pretrial maneuvers. The defense sought decisionmakers favorable to its side, persuadable jurors in a sympathetic county, and a friendly judge who would give the defense case wide latitude. This maneuvering is most graphically seen in the defense motion for a change of venue away from Richland County, where the crime occurred. Tillman’s lawyer argued that a fair trial could not be had in Columbia because N. G. Gonzales’s paper, The State, held sway over public opinion there, and the jury pool would be tainted by anti-Tillman prejudice.

The clash of values was pronounced at this stage. The press was depicted by the defense as a bully in league with moneyed interest against the salt-of-the-earth common man, the farmer and mill worker, supposedly championed by Ben and Jim Tillman whose personal and family honor were at stake. Even ministers were castigated by the defense because they had prayed for Gonzales’s survival, while he still fought for his life in the hospital. This argument placed honor above human life. The judge agreed that a change of venue was necessary to achieve a fair trial. The trial was shifted to Lexington County, widely considered by political sages to be “Tillman country.” The jury selected in Lexington was composed of farmers and mill workers, the core of the Tillmanite constituency.

The last piece in the defense’s quest for favorable decisionmakers fell into place when the regularly scheduled judge became ill and the Lexington bar, many of whom had been retained by the defense, petitioned the Chief Justice and governor for the appointment of a “special judge.” This resulted in the appointment of Frank Boyd Gary to preside. He was an able lawyer but was called “cousin Frank,” by the Tillmans, a mark of friendship rather than a family relationship. 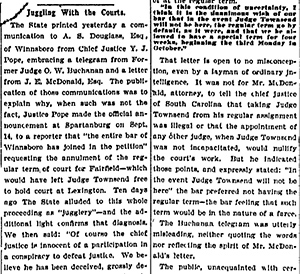 A large cast of politically connected lawyers appeared in the case. The prosecution was led by John William Thurmond, the solicitor, and G. Duncan Bellinger, an experienced prosecutor and former state attorney general. Thurmond was the father of future U.S. Senator Strom Thurmond, and was widely considered Ben Tillman’s political ally. This did not deter him from conducting a vigorous and thorough prosecution. The leading defense counsel were Congressman George W. Croft, Jim Tillman’s law partner, and Patrick H. Nelson, who would in 1911 become president of the South Carolina Bar Association. Ironically, Thurmond himself had been tried and acquitted of murder in 1897 and his defense counsel were Croft and James H. Tillman.

These were the leading players in the trial that lasted from September 28 until October 15, 1903. The trial had the aura of a political as well as a legal battle, since The State had been the leading anti-Tillman newspaper. 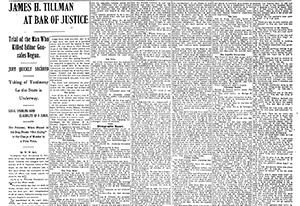 To understand the case the reader must differentiate the real defense from the sham defense. The real defense was Tillman’s claim that he had to kill Gonzales to stop the insulting editorials that attacked his honor. Since this is not a legal justification for murder, Tillman and his lawyers had to cover this real defense with the camouflage of what would be a legal defense if proven, i.e., that Gonzales had placed him in imminent danger of loss of life or serious bodily harm.

Despite this thin patina of a self-defense claim, both sides spent considerable time on the wording of Gonzales’s editorials and the question of whether they exceeded the bounds of freedom of the press. The prosecution pursued the dangerous strategy of using the editorials to prove that Tillman’s shooting of Gonzales was a premeditated act, rather than a reaction to immediate danger. It contended that the editorials were insulting enough to give a motive to plot the crime in advance, but not so dangerous as to be unprotected speech. The defense argued that by attacking Tillman’s character and his personal life, Gonzales had gone beyond legitimate speech, even when the object was a politician running for high office. The defense contended that freedom of the press was severely restricted: newspapers could only give a dry recital of facts; opinions were forbidden. 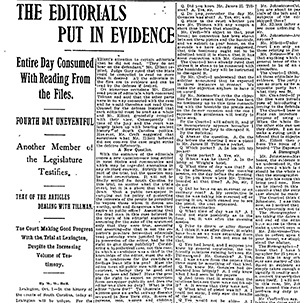 Interspersed with this fierce imbroglio over freedom of the press were the prosecution’s proof of the facts needed for a murder conviction, and defense evidence supporting its contention that Gonzales appeared to be reaching for a gun so that Tillman had to fire a preemptive shot. This was a hard task since Gonzales had been unarmed. The defense produced witnesses, including Jim Tillman, who testified that Gonzales, who habitually walked with his hands in his pockets on cold days, had thrust a hand further down in a pocket as if to go for a gun. To lend credence to Tillman’s assertion that Gonzales appeared to be going for a gun, the defense called witnesses who stated they had heard Gonzales make statements threatening Tillman. 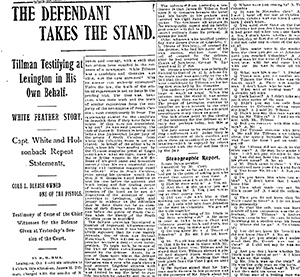 Was such shaky evidence of self-defense, coupled with the defense’s assault on freedom of the press and N. G. Gonzales’s editorials, enough to persuade the jury to bring in a not guilty verdict? The answer is found in The State’s coverage of the shooting and trial and in my book Deadly Censorship: Murder, Honor and Freedom of the Press (University of South Carolina Press, 2013).