Following the Trail of a Deep South Massacre 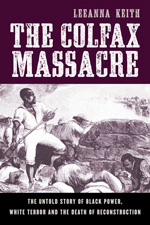 Recent access to new scholarly databases has enabled me to pursue an unfinished story I had encountered during my research about the Colfax Massacre of 1873, a racial conflict arising from the Reconstruction-era politics of Louisiana. In particular, I hoped to learn more about a curious document I had turned up in the course of my inquiry into the life of William Smith Calhoun, a Radical Republican scalawag and planter whose tremendous family estate included the town of Colfax, where Republican blacks met disaster in battle with a White League or Ku Klux armed force.

Calhoun had played a key role in an 1869 challenge to the outcome of the previous national election, in which one of his neighbors, Michael Ryan, had been seated with the Democratic Party minority in the House of Representatives. I learned as much the old-fashioned way, at the New York Public Library, in a bound volume of nineteenth-century pamphlets that included a privately printed compendium of Michael Ryan's brief to the House of Representatives. Reading cautiously but still stirring a cloud of debris from its pages, I gleaned mostly biographical details and marveled that the otherwise obscure Calhoun had offered linchpin testimony that resulted in Ryan's removal as the Representative of the 4th Louisiana Congressional District.

Willie Calhoun and Ryan had formerly been intimate friends, with Ryan serving as the young man's attorney and as a substitute for Calhoun's absent father. By the time of the election contest, however, Calhoun had come to think of Ryan as a traitor to his country, a possibility delicately disputed by the witnesses in the pamphlet of Ryan affidavits. For his part — as he pointed out acidly during his own examination of the witnesses — Ryan had lost all love for "that little crooked-backed fellow," Calhoun, a profoundly disabled hunchback. Willie's report about Confederate speeches and gray uniforms would help to unseat Ryan fifteen months into his Congressional term. 1

Using electronic versions of documents in the Archive of Americana and other new materials, I discovered how the personal drama of Calhoun v. Ryan fit into the larger national history of Reconstruction, including the Congressional election contest known as Newsham v. Ryan. Joseph Newsham, as it turned out, had been the incumbent in Congress, nominated by the Louisiana Constitutional Convention of 1867 and elected in the historic springtime elections of 1868, in which southern states sent representatives to the closing session of the 40th Congress. Unlike Ryan and Calhoun, who were residents of Rapides Parish in Central Louisiana, Newsham made his home in West Feliciana Parish, in the eastern reaches of the 4th District. All three men had been raised elsewhere and relocated to Louisiana: Ryan to Alexandria from Ireland; Calhoun from Huntsville, Alabama and Paris, France; and Joseph Newsham, born in England and raised in southern Illinois, to the town of St. Francisville in the Mississippi Delta.

Biographical details about Newsham, who faced Ryan only months into his tenure for November elections, appeared in the testimony of Newsham's brief to the Committee of Elections for the 41st Congress. Unlike Ryan's self-published pamphlet, serendipitously preserved in New York, Newsham's case was printed at the expense of the House of Representatives and included in the Readex digital edition of the U.S. Congressional Serial Set. 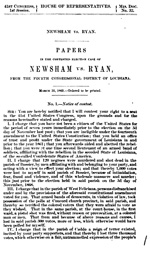 Newsham's witnesses, includin g Willie Calhoun, described his Democratic rival as a man of well-known rebel sympathies, who had provided cotton and tax payments to insurrectionary Louisiana and the Confederate States. The allegations targeted Ryan's eligibility to serve under the stipulations of the Fourteenth Amendment, which disqualified rebels from office in the Senate and the House. A lengthier portion of the document, Newsham v. Ryan, House Miscellaneous Document No. 32, detailed the campaign of intimidation that Michael Ryan's Democratic supporters had conducted in the '68 election. According to Louisiana's carpetbagger governor Henry C. Warmoth, who submitted a letter on Newsham's behalf, the Democrats' campaign of intimidation had been "an outrage on republican institutions and ruinous to good government here for years to come." 2 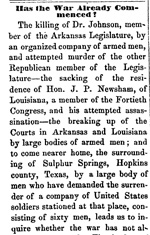 America's Historical Newspapers, also part of the Archive of Americana, provided some of the texture of the Democratic threat. Southern papers in Louisiana and neighboring states targeted the northern-born Newsham during the first 1868 election, denouncing him in April as a "scabby, carpet bagging, beer-jerking, ill-favored, dirt-struck, shirtless, free-souper" and other epithets too racist to repeat.3 By the summer, as Ryan's challenge to the Republican incumbent got underway, newspapers as far away as Massachusetts were reporting that white activists had raided Newsham's home in St. Francisville and held his wife at gunpoint, demanding he surrender from the race.4 Violence reached a crescendo in November, when Republican voters could not make themselves heard at the polls. In Bossier, Caddo, and Sabine Parishes, Newsham was reported to receive only one vote compared to thousands in favor of Michael Ryan. In DeSoto Parish, where Ryan was said to get 1,259 ballots, Newsham's tally was zero.5

The House Committee on Elections reported favorably on Newsham's petition in April 1870, reaching the conclusion that Ryan was ineligible for office because he had provided "aid and comfort" to the enemies of the United States. It also recommended that the results of the balloting in the disputed parishes be omitted from the final count.6 Acting on the committee's recommendation — and fighting back a Democratic filibuster — Republicans in the House voted to unseat Ryan and to admit Newsham in his place. Newsham was sworn in on May 23, 1870.

The violence in Louisiana's 4th Congressional District would outlast Newsham's tenure in the House of Representatives. By the end of 1870 another carpetbagger — the one-armed Union officer James McCleery — followed by yet another, an African American native of Ohio, Samuel Peters, had won the 4th District seat. Both died after only months in office of apparently natural causes. Violence, meanwhile, would claim the lives of hundreds in Central Louisiana in the 1872 elections and afterward. The contest to control the balloting resulted in widespread fraud and intimidation by conservative whites, including the climactic political bloodletting in Colfax on Easter Sunday, 1873.

At Colfax, Willie Calhoun and his mostly black allies would pay the price for their challenge to the traditional leadership of Southern whites such as Michael Ryan. Along with the materials in the Archive of Americana and other sources, the unmarked grave of 60 victims of the Colfax Massacre attests to the high stakes of Reconstruction government in the American South.