Making Books Out of Ether: The Next Generation of Historical Research
Robert E. Wright

To read Part I of this article in the Spring 2006 issue of The Readex Report, click here.

What finally made John Frémont's career was the second western expedition. This time the Army ordered him to map the wagon route all the way to Oregon. Having had some trouble with Indians on the 1842 trip, Frémont decided to requisition not just an assortment of guns and ammunition, but also a cannon—a brass 12-pounder mountain howitzer (S.Doc. 14, 28-1).

Leaving in May, 1843, from what is now Kansas City, Frémont's main party followed the emigrant route through Nebraska and Wyoming. Frémont and a few companions soon split off to travel a more southerly route, taking them near modern Denver and allowing them to explore the northern edges of the Great Salt Lake before reuniting with the expedition. His published report's glowing description of the region around what is now Salt Lake City would be largely responsible for Brigham Young's decision to move his people there.

When Frémont reached Oregon in November, 1843, he decided not to return as instructed along his outward route. Instead, he decided to explore southward along the eastern edge of the Cascades and search for the legendary River Bonaventura, which some believed flowed westward through the Sierras to the Pacific. If it existed, which most doubted, emigrants would have an easy passage through the mountains to California.

By mid-December, 1844, Frémont was on the shore of what he named Pyramid Lake (in northwestern Nevada) for a rock formation near the shore, which he insisted was exactly the size of the Pyramid of Cheops. Although considerably smaller than even the smallest of the pyramids at Giza, it was recorded quite exactly by his cartographer/illustrator, Charles Preuss. 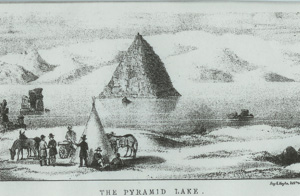 In January, while camped on the Carson River east of modern Reno, Frémont announced that their horses were too worn out by the rocky passage south from Oregon and couldn't make the long trip home. Their only course, Frémont insisted, was to risk a winter passage across the Sierras where they would seek assistance from John Sutter in California. An October, 1843, entry in Preuss's diary (unpublished until the 1950s) reports that they intended to return home after visiting Monterrey.

Frémont took two more weeks searching for the Bonaventura before climbing into the Sierras south of Lake Tahoe. By then, 14 feet of snow had fallen in the mountains. Mountain men advised him that a winter passage was insane; Indians refused to guide him. Frémont spent six weeks making the crossing of less than 100 miles. His men ate the horses, ate the mules, even ate his dog, and they abandoned his cannon, but no one died. They were a ragged bunch when they finally struck the westward-flowing American River and made their way to Sutter's Fort, but they all arrived safely.

They obtained fresh supplies from Sutter and by the end of March, 1844, headed south along the San Joaquin River to find an ice-free passage through the southern Sierras. They eventually crossed the Old Spanish Trail and took it as far as the Colorado River before heading north through what is now Las Vegas and back to the Salt Lake. From there they struck the outward trail again and proceeded home. This part of the trip literally and figuratively put Las Vegas on the map. Las Vegas appears on Frémont's map and on every map thereafter. 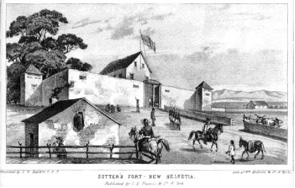 The expedition report (H.Doc. 166, 28-2) was an enormous hit with Congress and subsequently with the public. Twenty thousand additional copies were ordered and printed, 150 of which were obtained by Brigham Young. The report was not only widely distributed by the government, but in the absence of copyright it immediately appeared in a series of private editions, including translations into five foreign languages. It has never been out of print.

The wide distribution of the report made Frémont a popular hero and helped accelerate movement west. At the same time, almost as in a Greek tragedy, his moment of great triumph contained the seed of his ultimate downfall. Frémont got away with requisitioning the howitzer, but made enemies, including Stephen Kearney, who later became his nemesis in California. Deciding without orders to return home via California seems to have persuaded Frémont that he could defy authority without consequence, and successfully crossing the hazardous Sierras in mid-winter seems to have persuaded him that he could defy even the forces of nature. He would pay the penalty himself for the first two beliefs, and men would die on his fourth and fifth expeditions because of second belief.

Look for the final part of Frémont's life in a future issue of The Readex Report.