The World’s Greatest Aviator: Daredevil Lincoln Beachey and the Dip of Death

The World’s Greatest Aviator: Daredevil Lincoln Beachey and the Dip of Death 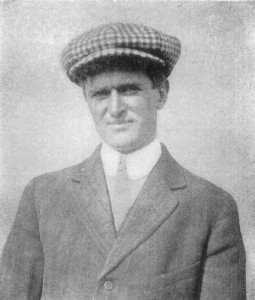 In the early 20th century, aviator Lincoln Beachey and his Curtis biplane amazed and delighted crowds with the “Dip of Death” and his mastery of “looping the loop.” Or by daring to fly upside down, which on one occasion shook $300 from his pocket and led him to quip,

I am willing to take a chance of losing my life flying upside down but it’s certainly tough to be torn loose from my bank roll, too.1

A groundbreaking aviator and breathtaking stuntman, he could boast of having performed for over 20 million spectators, or about one fifth of the U.S. population at the time. Yet 100 years later his name is largely unknown. 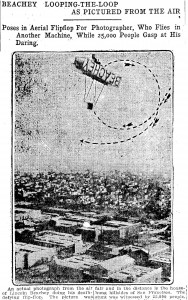 Beachey’s daring stunts kept his audiences captivated by playing on their worst fears. A January 1912 article in the Morning Oregonian referred to one such occasion as

a rather ghastly joke on the crowd that was still on edge as a result of the tragic fate of young Rutherford Page yesterday afternoon. After several thrilling “death dips,” attempted emulation of which caused the sudden end of Page's career, Beachey rose to an altitude of about 400 feet, from which he made a sheer drop almost perpendicularly and disappeared in the gully where Arch Hoxsey fell to his death a year ago.2

But to Beachey, the article continued, it was all just good fun. He “flew past the grandstand, and laughingly waved to the crowds which had experienced all the thrills of witnessing an aerial tragedy.” In 1905, at just eighteen and before ever having set foot in an airplane, Beachey had already made a name for himself flying dirigibles. Quick to display his fearless attitude and confidence, he was quoted in the Baltimore American, saying:

It’s just as safe up there as it is down here, if you don’t get scared, and scary people...have no business in an airship.3

Dirigible flying proved to be both exciting and lucrative for Beachey. As the Aberdeen Daily American reported, he won first prize and $2,000 at the 1907 St. Louis Aeronautic Carnival:

In his “Beachey Airship,” a cigar-shaped affair, propelled by a four-cylinder gasoline motor, the winner covered the distance in four minutes and forty seconds.4

Beachey also led his peers in seeing aviation’s potential. In 1905 he expressed confidence in the safety of flying. As reported by The Macon Telegraph, he felt “just as safe a thousand feet up in the air as on terra firma” and he intended to

demonstrate to the world that it is practicable to navigate the air with safety and that the airship may be made a thing of commercial use.5

In October 1910 Beachey sold his dirigible and turned his attention to airplanes. By the summer of 1911 Beachey had begun attracting massive audiences. Over 150,000 people gathered that June to watch him “skim the falls of Niagara” and fly beneath the arch of the Honeymoon Bridge, feats that thrilled the aviator himself, as reported in the Cleveland Plain Dealer:6 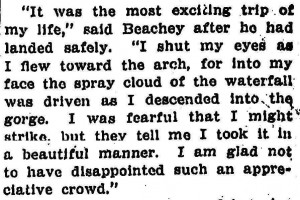 Just over a month later, in August 1911, The Philadelphia Inquirer described Beachey speeding over the heart of Manhattan while winning $5,000 in a race between New York City and Philadelphia.7

Later that month at an aerial carnival in Chicago a quarter of a million people gathered to see Beachey set a new altitude record of 11,578 feet.8 When Beachey wasn’t setting records, winning races, or shocking crowds with his aerial acrobatics, he found other ways to amuse himself and his audiences. On February 19, 1912, the Morning Oregonian reported that

two Oakland ballplayers tried today to catch oranges dropped from an aeroplane flying at an altitude of 550 feet....Neither succeeded.9

And days later, also recounted in the Morning Oregonian, a cross-dressing Beachey posed as Mademoiselle Cozette De Truise, the “wonderful French aviatrix of Pau,” who dashed

through the air in a fashionable sheath gown above a gaping crowd at the Oakland aviation meet today, performing thrilling aerial feats....With silk skirts fluttering in a 40-mile gale and plumed hat straining at a long pink chiffon veil which anchored it to his head, Beachey sped around the air, now and then shaking a bespangled slipper at the astonished crowd.10

In fact, he dressed as an aviatrix more than once, and not always without consequence. A September 23, 1912 article in the Augusta Chronicle tells of Beachey in Chicago, “sending automobiles in all directions” as he “skimmed up and down Michigan Ave.” He so excited “the spectators in a launch in the harbor that they all gathered at one edge of the craft and it tipped over.”11 Eight months later, in May 1913, Beachey had completely changed his perspective. Although he still had not succeeded at looping the loop he told the Jackson Citizen Press,

You could not make me enter an aeroplane at the point of a revolver. I’m done!12

He went on to reproach his audiences for having

a morbid desire to see something happen. They all predicted I would be killed, and none wanted to miss getting in on it. They paid to see me die. They bet, and the odds were always against my life.13

Even the Daily Alaskan Dispatch reported the news of Beachey’s retirement, which he acknowledged was due to not only his fear of death, but also that...

I have made a fortune with my aeroplane...and I can retire to comfort. I am done with the game...14

By that fall, however, he seemed to have changed his reasons for retiring. In a 1913 Plain Dealer article headlined "The Pacemaker for Death Quits," he referred to the “blame and remorse for the death of brother aviators who went crashing into eternity trying to 'out-Beachey Beachey.'"15 The article further quoted Beachey as saying16

Ironically, two days later, Captain Peter Nesterov, a Russian pilot, would be the first to loop the loop. And twelve days after that, on September 21, 1913, before learning of Nesterov's success, French airman Adolphe Pégoud also flew in a loop. Not to be outdone, Beachey came out of retirement. By the end of November 1913, he had flown a double loop, as reported in the Morning Oregonian:

Starting at a height of 2500 feet, the aviator dropped strait downward into the first loop and immediately turned over again into the second, landing afterward.17

And a month later, the Morning Oregonian reported that Beachey broke the

world’s record, looping the loop five consecutive times from a height of 750 feet and landing in a narrow street on the Panama-Pacific Exposition grounds. Beachey turned a double loop at a height of 300 feet, which, he said, is a record in-itself...18

Setting records looping the loop, however, was not enough to earn Beachey a living. Audiences quickly learned there was no need to buy tickets, since they could see the stunt from anywhere close by. Beachey found a solution in a high fence and popular racecar driver Barney Oldfield. Beachey began racing Oldfield, and the two took turns “winning” to keep crowds coming back night after night. 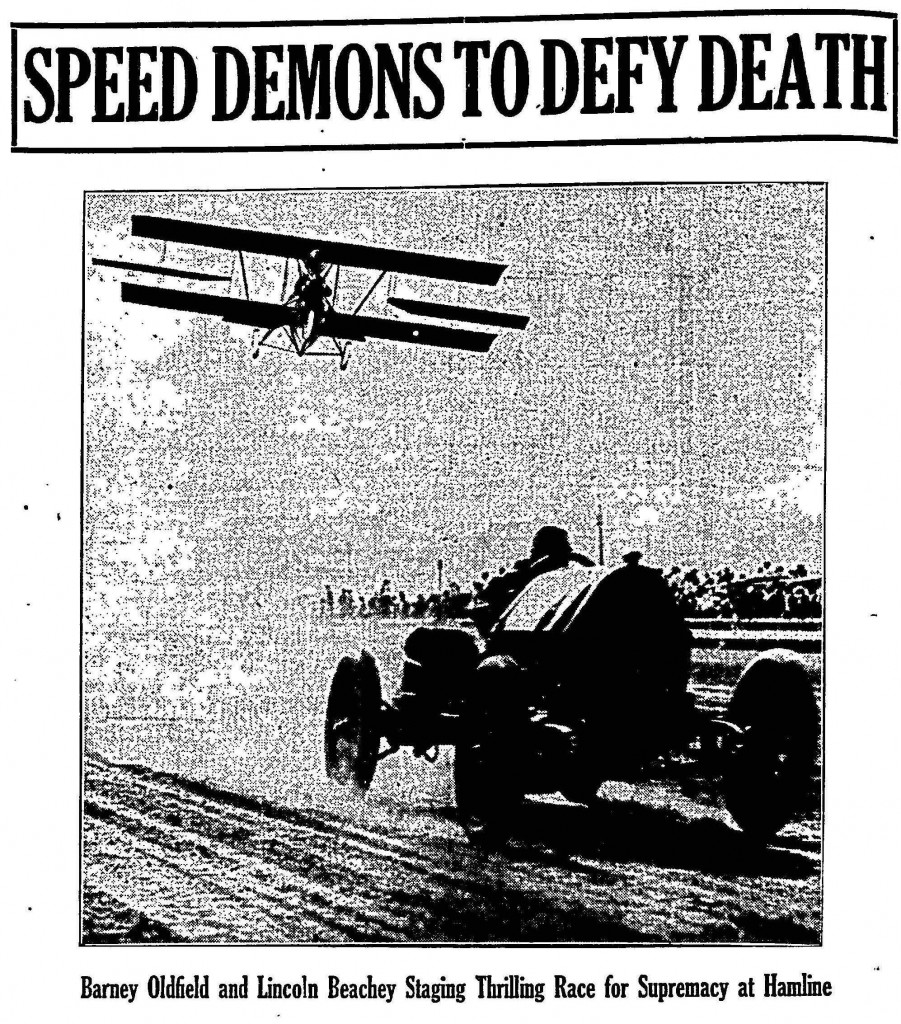 Beachey's savvy and skill made it easy to forget the ever-present danger at even these staged events. In January 1914 the Idaho Daily Statesmen reported that Beachey deliberately wrecked his biplane but avoided

what appeared to be a certain sacrifice of two lives....Beachey was descending after an exhibition flight, and directly below him was an automobile driven by Barney Oldfield and carrying a newspaper photographer as a passenger. The aviator swerved his machine, which collapsed and turned almost completely over, burying Beachey beneath it. His only injuries are bruises.19

Two Philadelphia Inquirer articles also recount Beachey's willingness to attempt the seemingly impossible, and his luck at avoiding serious injury in the process. In December 1913 the Inquirer reported,

In what is believed to be the first biplane flight ever attempted underneath a roof, Lincoln Beachey circled successfully the interior of the Palace of Machinery at the exhibition grounds today, but made a poor landing and smashed his biplane. Beachey was not injured.20

About a week later, unfazed by the accident, Beachey told the paper “aviation within a closed structure was comparatively easy.”21 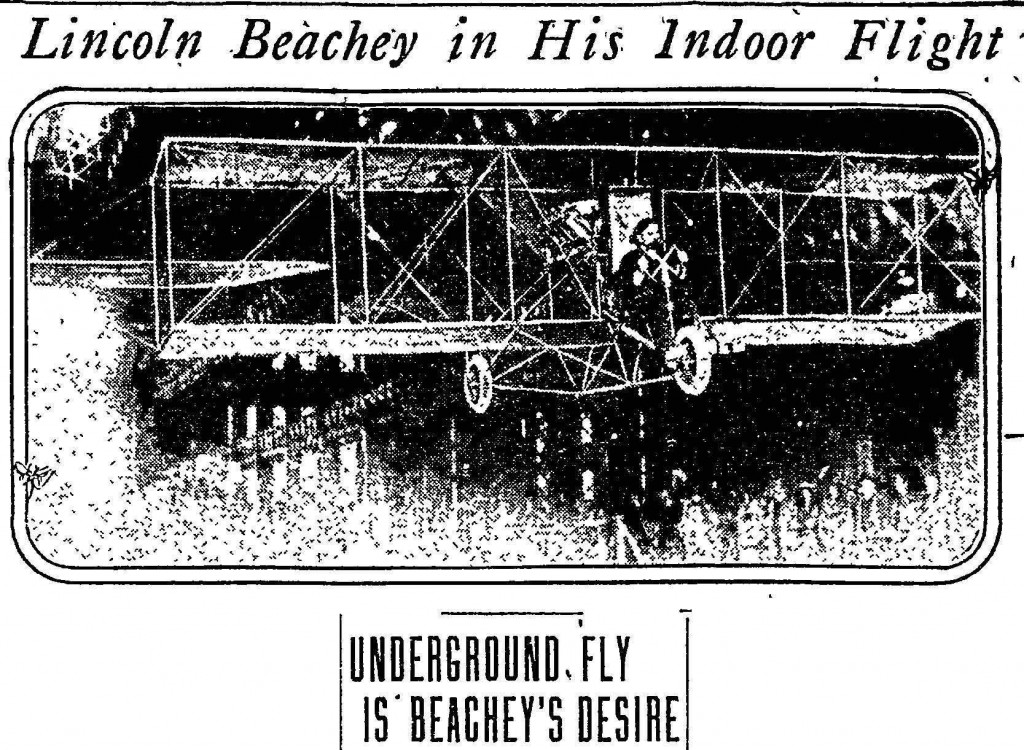 While Beachey had escaped again with only bruises, he continued to be concerned that many aviators were less fortunate, particularly those of the U.S. Signal Corps. Beachey expressed his frustration toward not only the government’s inattention to the safety of its pilots, but also by its lack of recognition for the potential of military and commercial aviation. He told The Boston Journal:

Aviators of the government signal corps are being sacrificed….Many times I have seen these fellows patching up their old machines—trying to make an aircraft out of scrap! Lack of proper materials brings death to our army fliers. Even gasoline is scarce sometimes.22

Beachey continued, charging that the

parsimonious policy of our government toward aviation is directly responsible for its lack of advancement. Progress must be slow and dotted with tragedies until Congress is awakened to the value of flying as an agency in warfare and the affairs of commerce.23

This was not the only time Beachey voiced his concerns. On November 25, 1913, The Idaho Daily Statesman reported24 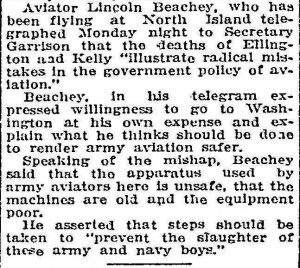 Eventually Congress began investigating the allegations of lack of proper equipment and mismanagement of the Aviation Section of the Army Signal Corps. Recorded in the U.S. Congressional Serial Set, a letter from the Senate Committee on Military Affairs referred to Beachey’s description of one base as “outrageously defective in equipment and management.” And “that he communicated his opinion in a bitter protest which came to the knowledge of the War Department.”25 Sadly, Beachey would not live to see his recommendations implemented.

On March 14, 1915, Lincoln Beachey's breathtaking career came to a horrifying end at the Panama-Pacific International Exposition. He had just begun flying a monoplane rather than his steadfast Curtis biplane and the stress of his stunts proved too great for the monoplane's construction. The Duluth News-Tribune reported,

At an altitude of 3,000 feet, Beachey began a sharp descent. The wings of his aeroplane collapsed and the machine plunged into San Francisco Bay.26

Although Beachey's safety restraints minimized his injuries from the impact of the crash, he was unable to free himself from the wreckage and tragically drowned.27 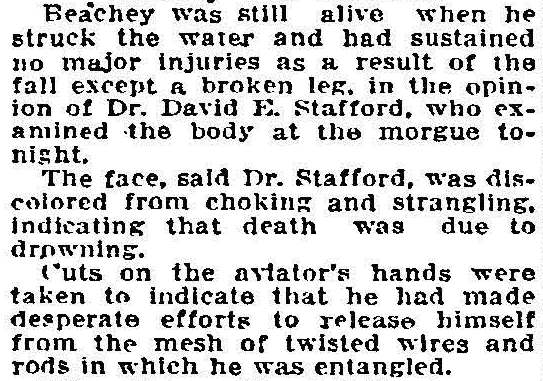 Perhaps it was inevitable Beachey's stunts would eventually be his undoing. In fact, he had foretold his own death. The Salt Lake Telegram’s obituary for Beachey recalled an interview in which after having named nine fellow aviators who had perished while stunt flying, Beachey with a cynical smile added: ‘Well, I might as well add my own name, too, because it is bound to come.’”28 By the time of his death Beachey was one of the two highest ranking officers in the Volunteer Aviation Reserve. The reserve’s organizer, Albert Lambert, spoke of the pluck Lincoln Beachey exhibited throughout his short life, telling the Salt Lake Telegram29

Beachey was referred to as a daredevil but the qualities which gave him that name are absolutely essential to military flying. It was his unlimited courage more than anything else that enabled Beachey to live as long as he did.